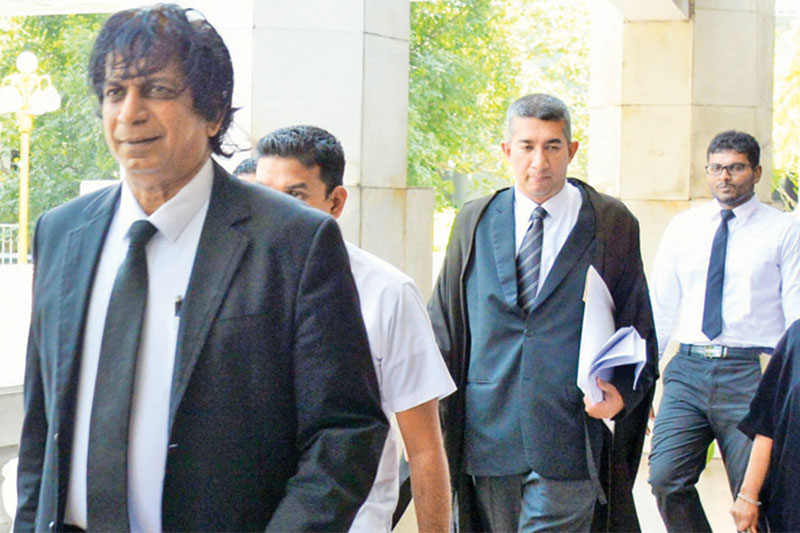 Attorney General Dappula De Livera is now a man constantly in the news due to his actions in relation to prosecutions of high profile cases.

However, his conduct has raised many eyebrows among the legal fraternity and recent revelations of the support his actions has vested on former Defence Secretary Gotabhaya Rajapaksa in furthering his political ambitions.

“The Hon. Attorney General’s expertise range from the law relating to Financial Crimes, to Narcotics, Terrorism, Human Trafficking and Money Laundering. He has also served as a Legal Consultant to the Financial Intelligence Unit of the Central Bank and as and the Senior Legal Counsel to a Special Presidential Commission that inquired into the Maintenance of Law and Order in Sri Lanka. Notably, Mr. De Livera was the Chief Prosecutor of the Commission of Inquiry appointed to Investigate and Inquire into and Report on the Issuance of Treasury Bonds (popularly called the “Bond Commission”) Mr. De Livera earned high praise for his role as a fiercely independent prosecutor of the Commission,” the Attorney General’s profile has stated. 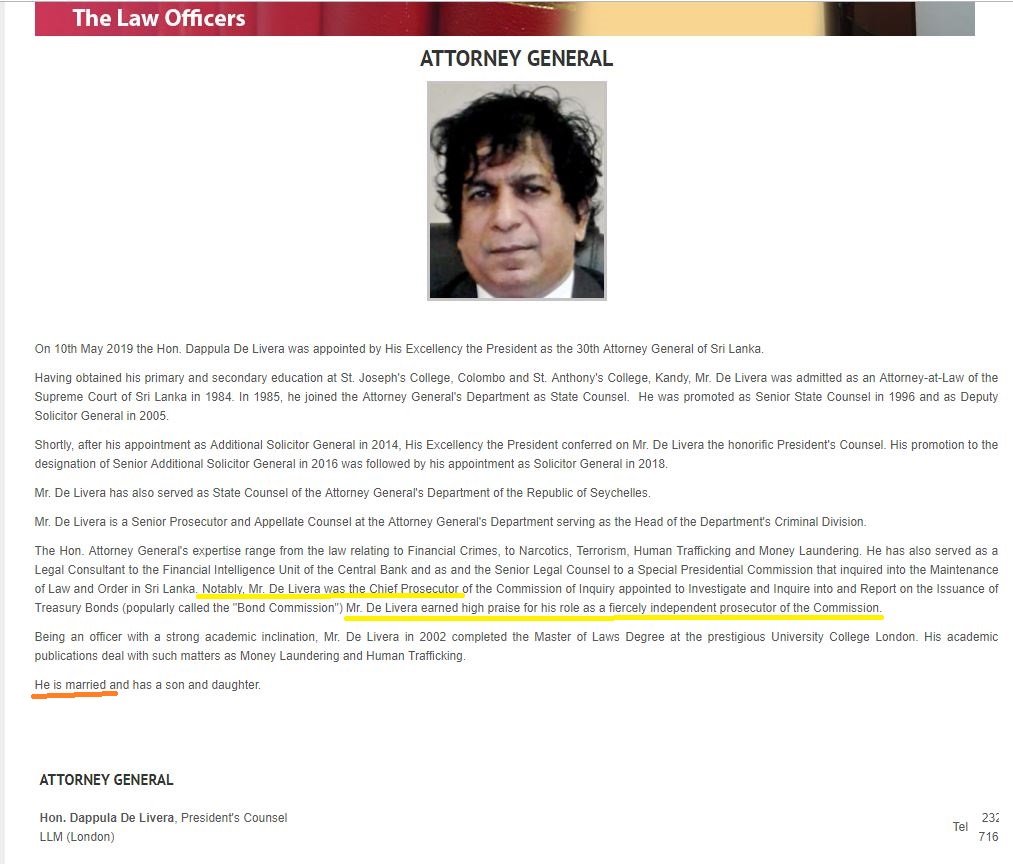 Firstly, the Bond Commission did not prosecute as it was only an inquiry body.

Secondly, the Bond Commission had also condemned De Livera’s behavior as “unbecoming for a senior counsel.”

In fact, the Bond Commissioners on November 2, 2017 had reprimanded Senior Additional Solicitor General Dappula De Livera, for questioning the Commission’s order and the way in which he was behaving.

The state owned English newspaper, Daily News reported on November 3, 2017 “The Commissioners pointed out that his behaviour is unbecoming for a senior counsel.” 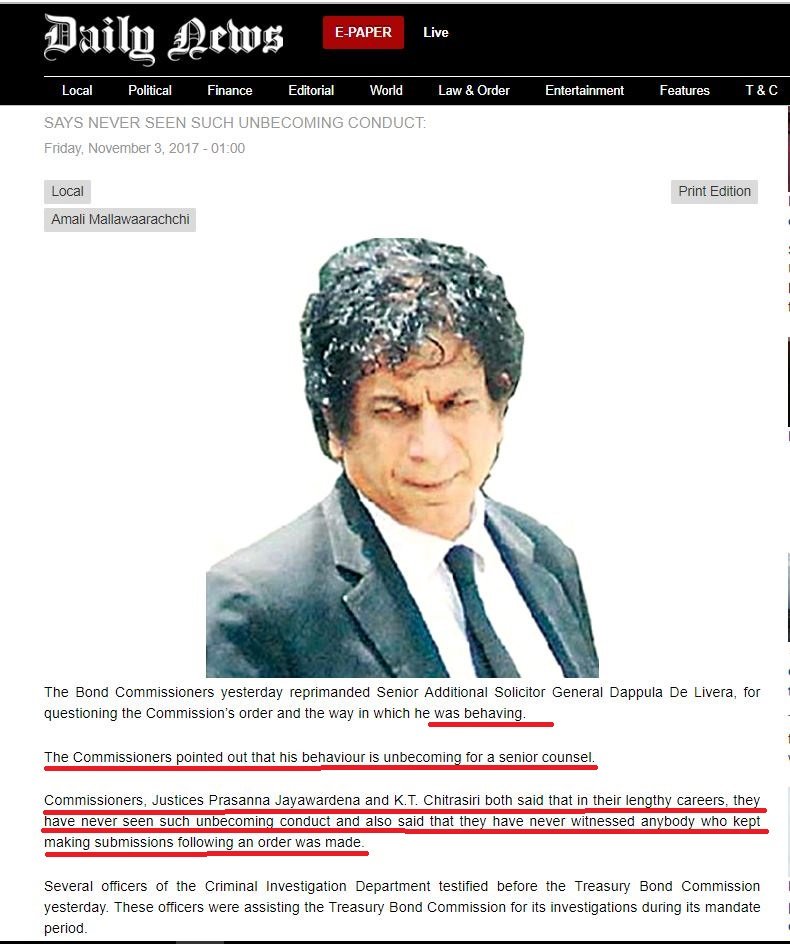 Commissioners, Justices Prasanna Jayawardena and K.T. Chitrasiri had both said that in their lengthy careers, they have never seen such unbecoming conduct and also said that they have never witnessed anybody who kept making submissions following an order was made.

Following is the news report published in the Daily News in November 2017:

“A heated argument erupted as the Attorney General’s panel who was leading evidence moved to mark the statements recorded by these CID officers from witnesses, as evidence before the Commission.

“In terms of law, a statement made before a police officer can only be used when contradicting evidence given by a witness. That was not done. In addition to that, there are statements apparently recorded from persons who have not given evidence before this commission. What is the situation then?” De Silva questioned.

Commissioner Justice P.S. Jayawardena said that in his view SASG De Livera’s submission has no merit. He also said, “I am sure your words will be appropriately reported by media. We are not interested in what newspapers report. We are interested in doing our job of work. And at the end to write a report.”

Counsel De Silva also pointed out that “Once these statements are marked it becomes evidence.” And furthered saying; “This is like sanctioning our entire system of law. What is the situation with regards to witnesses who have never given evidence before this Commission? Once their statements are marked before the Commission, they go in as evidence!” He also pointed out that these materials were not made available to them.

“So marking statements as evidence is alien to our system of law and system of justice.” he said.

It was also observed that marking of these statements goes against the rules of evidence in the Evidence Ordinance and the Code of Criminal Procedure.

President’s Council Kalinga Indatissa also observed that marking the statements recorded by police officers as evidence is against the rules of natural justice.

At this point Additional Solicitor General Yasantha Kodagoda who was leading evidence observed that the Commission which is in a process of ascertaining the truth, and in fact can accept these statements recorded by police officers as material of the investigation.

“The PCoI is established to ascertain the truth. For the purpose of ascertaining the truth, there are two mechanisms to a Commission of Inquiry. The first is the process of investigation, second mechanism is inquiring. We are currently going through inquiry. The process that took place two halls away from this hall done by these officers was investigation. In the 2008 amendment to the Commission of Inquiry Act, there is specific reference to both investigative tool and the inquiry tool. In order to look into truth the Commission can accept evidence lead before the Commission as well as materials collected during the course of the investigation,” ASG Kodagoda observed.

He also read a verbatim in paragraph 7 section A of the Commissions of inquiry Act supporting his observation.

ASG Kodagoda further said that “If someone is alleging that while as witnesses, these officers have intimidated them or used force to make statements in a particular manner, this is an opportunity to cross examine the relevant officers.”

It was reported last week that a Central Bank official filing a fundamental rights petition has sought the Supreme Court to prevent him from being questioned by Attorney General’s Department officers assisting the Bond Commission until the final determination of his petition.

Following ASG Kodagoda’s remark, Counsel De Silva stood to state that “This Commission should not be used as a platform to answer allegations made elsewhere. This is like washing linen of others.”

Then Senior Additional Solicitor General Dappula De Livera rose to say that “We are not washing other’s linen. We know when and where to do it.”

He also pointed out that the Commission is mandated to examine the materials collected in the course of investigation and accordingly can accept the submissions to mark the said documents.

Speaking of the order SASG De Livera rhetorically observed that “This commission by this order has prevented itself from looking at investigative materials.

“My position is that the commission is making a mockery of this proceeding by preventing itself from looking at these investigative materials.”