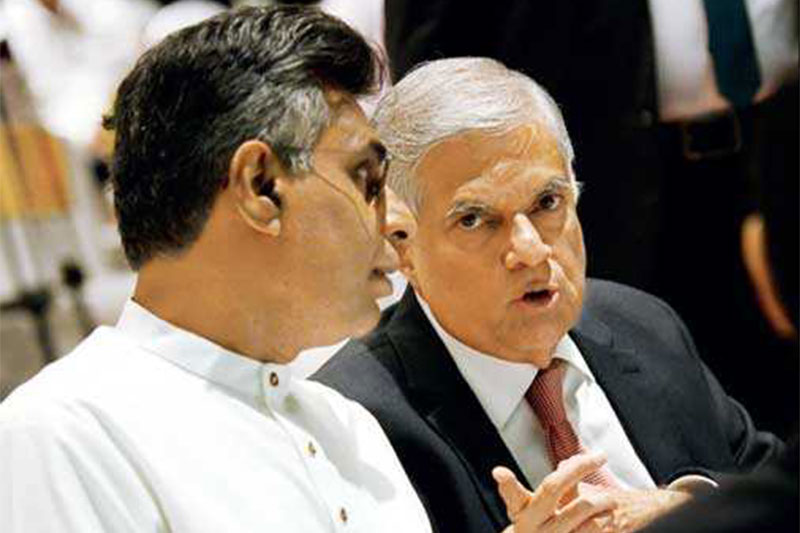 Prime Minister and Leader of the United National Party (UNP) Ranil Wickremesinghe had reportedly informed Rajitha Senaratne, Champika Ranawaka and Field Marshal Sarath Fonseka of the United National Front (UNF) to prepare themselves to contest as the party’s candidate in the upcoming presidential election. However, Wickremesinghe is said to
be leaning towards choosing Patalila Champika Ranawaka, The Leader learns.
According to sources, propaganda carried out by the Minister in the last few weeks has showed that he can win the confidence of the Bhikkus and middle-class citizens than the other two possible candidates. This was revealed in a secret research done by the Prime Ministers Office.
Party insiders have pressured Wickremesinghe to not contest in the upcoming elections as done before in both 2010 and 2015. According to sources, if the push back is serious, the Prime Minister has decided to field a candidate outside the UNP to contest in the election.
Therefore, the PM has already invited Casino tycoon Dhammika Perera to contest. However, faced with vocal opposition against Dammika within the party, the PM had informed the other three Ministers to prepare themselves to contest in the upcoming election.
Desire of the Sinhala Middle Class!
Making calculations, a team from the Prime Minister’s office has estimated that in order to win the election, the candidate put forward will need an additional 3.5 million votes than the regular UNP vote base. In a confidential report compiled by the team, the PM has been told that the support of minority parties as well as floating votes will be crucial for a UNP win.
Talking about floating votes, the report noted that the Sinhala middle class votes will be important and a deciding factor at the election. The report has also suggested that Minister Patali Champika Ranawaka would be the most ideal candidate as a result.
Sankalpa Marasinghe’s Article :
Meanwhile responding to Sankalpa Marasinghe’s article on the Colombo Telegraph website titled 'The UNP Presidential Hopeful & The Middle-Class Hopeful ' which is stressing that the middle class vote will be important, a former UNP media head Thushara Wanniarachchi has posted a note on his Facebook page.
“It is good if at least the UNP members within the inner ciricle can read this article. The deciding factor of the upcoming elections would be the desires of the country’s middle class. If the UNP cannot address this, the defeat of the party would be inevitable."
However responding to this Uvindu Kurukulasuriya, Editor of the website on Facebook said “Despite what the middle class thinks, it is better if Champika refrains from contesting from this powerless Presidential election."
Uvindu is referring to the fact that following President Maithripala Sirisena’s appointment in 2015, the 19th amendment reduced the powers of the President. According to the amendment, the next President will have lesser powers. However, despite this, all political parties seem invested in the upcoming elections.
A Smart Game by Ranil!
However, with the election propaganda already in place, the UNP leaders aim is not to contest but to hang on to the leadership of the party and obtain the post of Premier sources close to the PM said.
PM is said to have already decided against fielding Karu Jayasuriya and Sajith Premadasa as the candidates, and instead, ask the other three to prepare to prevent them from supporting either Jayasuriya and Premadasa.
Champika’s response!
Meanwhile, as the discussion remains such Minister Champika Ranawaka has said a Buddhist candidate will be put forward by the party. He made this statement attending an event at the Malwatta Maha Vihara.
He also said the presidential candidacy of Premadasa has not been confirmed. “Than a Yankee Buddhist, a true Buddhist will be put forward,” he said.
Video