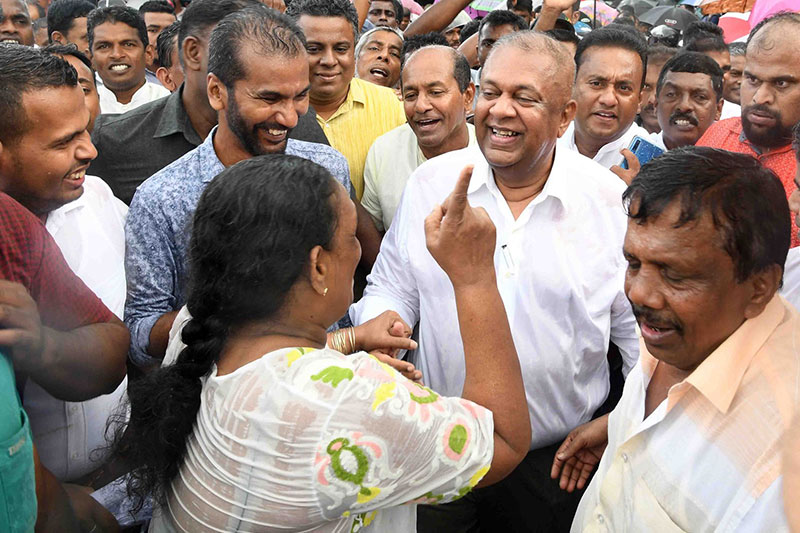 At a time where the possible candidates for the upcoming Presidential election are being discussed, in a recent video uploaded on social media, Minister of Finance Mangala Samaraweera said Sajith Premadasa would be put forward as the United National Party's presidential candidate with the blessings of its leader Ranil Wickremesinghe.

While the discussion surrounding the matter has intensified, poet Priyankarage Bandula Jayaweera had recently posted a verse which questions as to why Mangala cannot be President so that tribal, fundamentalists will be left upset.

Responding to this query, literature critic Jayasiri Alawatta had questioned Jayaweera saying “Is it because Mangala is from Matara?”. In response, Jayaweera had said “No! The way I see it, he is the most modern politician in the country now! (Him hailing from Matara has nothing to do with it.)”

Responding yet again, Alawatta had commented saying he agrees with Jayaweera’s statement. He also went on to say “Mangala is perhaps saying this out of honesty. However, this is the worst decision he has made in his career. If someone like Mangala who has new liberal thinking, and is a career politician can make such a statement, then many others would eventually get offended if he openly tells what he feels.”

The only UNP member able to challenge the Rajapaksas?

Meanwhile, senior journalist and political commentator Kusal Perera tweeted recently saying the best bet for the UNP to challenge the Rajapaksas' is by fielding Mangala Samaraweera from the available lot.

However, when asked if he would contest as the Presidential candidate the Minister responded in this manner: