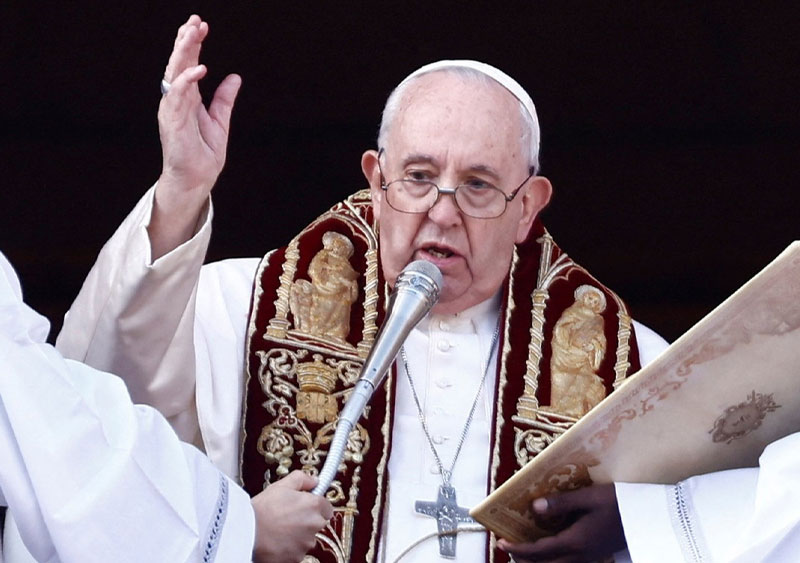 Pope Francis has said the world is suffering from a "famine of peace", in his annual Christmas Day message from the Vatican.

He called for a end to the "senseless war" in Ukraine, condemning what he said was the use of "food as a weapon" of war.

Ukraine shipped about 30% of the world's wheat and prices have jumped since the Russian invasion in February.

It was Pope Francis' 10th Christmas Day address since he assumed the papacy.

While the war in Ukraine occupied much of his 10-minute speech, he spoke of "a grave famine of peace also in other regions and other theatres of this Third World War".

He singled out conflicts and humanitarian crises in the Middle East, Myanmar, Haiti, and the Sahel region of Africa.

The pontiff also prayed for "reconciliation" in Iran, where mass anti-government protests have swept the country for more than three months. The protests there have been met by a crackdown, with more than 500 people, including 69 children, killed, human rights groups say.

Speaking from a balcony at the basilica overlooking St Peter's Square, the 86-year-old Pope lamented the human cost of war. He urged not to forget those "who go hungry while huge amounts of food daily go to waste and resources are being spent on weapons".

"The war in Ukraine has further aggravated this situation, putting entire peoples at risk of famine, especially in Afghanistan and in the countries of the Horn of Africa," he said.

"We know that every war causes hunger and exploits food as a weapon, hindering its distribution to people already suffering."

The Pope said "those who hold political responsibilities" should lead the way to make food "solely an instrument of peace".

His message was followed by the customary Urbi et Orbi (To the City and to the World) blessing, recited in Latin and traditionally in many other languages as well.