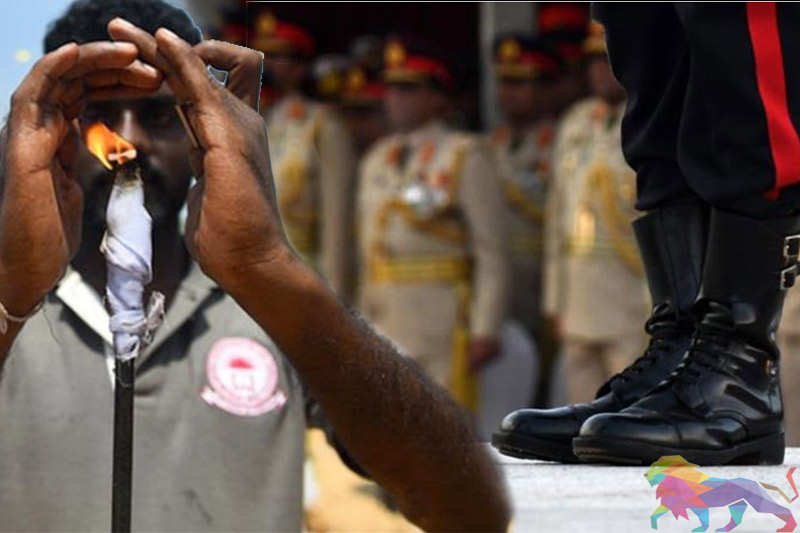 Reporters Without Borders (RSF) calls on the Sri Lankan authorities to punish those responsible for recent acts of violence and harassment of journalists and to ensure that the police stop harassing and intimidating reporters covering the problems that the Tamil minority still endure ten years after the end of the civil war.

The 27 May violence against Kanapathipillai Kumanan, a journalist working for the Tamil daily Virakesari, was the third reported attack on a journalist of Tamil origin since the start of the year. Kumanan was working on a story about a Hindu temple in the district of Mullaitivu, on Sri Lanka’s northeastern coast, when a police officer hit him, threw his camera to the ground and threatened him with worse violence if he reported this attack.

The focus of a conflict between the mainly Hinduist Tamil minority and the mainly Buddhist Sinhalese majority, the temple has been occupied for the past few years by Buddhist monks, who changed its name and recently installed CCTV cameras in order to control access. Kumanan had gone there to report on the failure to comply with a recent court ruling in favour of Hinduists who said they were being prevented from worshipping there.

“We call on the Sri Lankan authorities to not let this unacceptable act of violence against Virakesari’s reporter go unpunished,” said Daniel Bastard, the head of RSF’s Asia-Pacific desk. “Allowing journalists to investigate controversial subjects freely is the best way to defuse tension. Ten years after the end of the civil war, the resurgence in attacks by the security forces against Tamil reporters recalls the worst times in Sri Lanka’s history, when it was one of the world’s deadliest countries for journalists.”

The civil war finally ended in May 2009 with the Tamil Tiger separatist rebellion being crushed militarily. This has left deep scars in the collective memory and attempts by journalists to cover the demands of the Tamil minority’s representatives are being met with acts of intimidation from the security forces.

Shanmugam Thavaseelan, a reporter for the Asia Broadcasting Corporation and Tamil Guardian, was arrested by police on trumped-up charges on 20 April in Mullaitivu, the same district where the police attacked Kumanan five weeks later. Thavaseelan’s real crime was trying to cover a demonstration calling for justice for the Tamil civilians who disappeared during the civil war.

Nadarajah Kugarajah, a reporter for the Tamil TV channel Dan TV, was attacked by several police officers while investigating an arson attack two months before that in Jaffna, the capital of the mainly Tamil Northern Province, and had to be hospitalized with injuries, especially facial injuries.

This resurgence in attacks against Tamil journalists is all the more worrying because, after the Easter Sunday bombings on 21 April, the authorities reactivated the arbitrary detention procedures allowed under the Prevention of Terrorism Act, which were used to intimidate, arrest and even eliminate troublesome journalists during the civil war’s darkest years.

The government resulting from the 2015 elections undertook to end impunity for crimes of violence against journalists by reopening all relevant investigations. Four years later, no concrete result has been obtained in any of the investigations into the 14 murders of Sri Lankan journalists between 2003 and 2009 that RSF registered in its barometer of press freedom violations. Similarly, the dozens of cases of torture and intimidation also remain completely unpunished.

Worse still, Maj. Prabath Bulathwatte, the former head of an elite police unit tasked with silencing anyone who took too much interest in the activities of the security forces, was recalled into active service three weeks ago. Bulathwatte is the main suspect in many cases of abduction, torture or murders of journalists, including the Sunday Leader’s well known editor Lasantha Wickrematunge, who was killed in January 2009.

Cover Photo: Many ceremonies were held in Sri Lanka on 18 May to mark the 10th anniversary of the end of the civil war. The military celebrated “Victory Day” while the civilians who died were remembered in Tamil regions such as Mullaitivu (left), where two journalists were recently the victims of intimidation by the police (photos: Ishara S. Kodikara - Lakruwan Wanniarachchi / AFP).