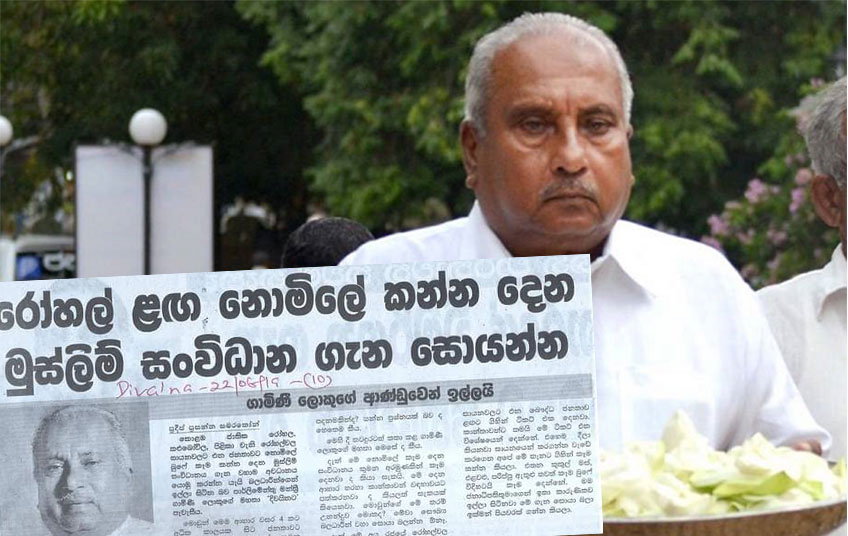 MP Gamini Lokuge appears to have hopped on the racist anti-muslim bandwagon by attempting to cause fear and panic about free meals given to patients near several major hospitals. “Muslim organizations which provide free meals near hospitals must be looked at by officials,”

the MP said adding that patients arriving for clinics at several major hospitals appear to be their targets. He made these comments at a press briefing held recently.

“We are suspicious as to why they are providing such a large number of free meals,” Lokuge said. Attempting to further spread fear, Lokuge even went on to say that he has suspicions if the meals are making the women who consume them infertile. “Why are they so bothered to feed these patients,” he said perhaps finding it inconceivable that a person or organization would conduct a charitable venture without an ulterior motive.

The MP went on to claim that the group targets Buddhist women, in particular, to hand out free coupons to obtain the meals. However, he failed to explain how the group identifies Buddhist women from others who attend clinics at these major hospitals. “I urge the President to look into this” he further added.

The organization Lokuge singled out for attack is the Janaposha Foundation which provides hundreds of free meals in the vicinity of several major hospitals in Colombo daily. They have been in operation for the past five years. Providing breakfast and lunch to those attending clinic sessions the organization usually provides meals for around 350 people daily at a premises close to the National Hospital while providing 300 meals for patients visiting the Kalubowila Hospital. Another 350 free meals are given out at the Maharagama Cancer Hospital.