England tasted Twenty20 World Cup glory here today in the most dramatic style when Ben Stokes edged them past Pakistan in a thrilling, low scoring final.

Stokes made an unbeaten 52 and put on a decisive stand of 48 with Moeen Ali that calmed England’s nerves and saw them past Pakistan’s 137 for eight with six balls to spare.

Yet if that seemed comfortable it was anything but, with Pakistan bowling brilliantly in defence of their average total on a used pitch until they lost their spearhead Shaheen Shah Afridi with what looked like a recurrence of his knee injury.

But that should take nothing away from the performance of Stokes who was brilliant in batting the situation, just as he was in the decisive group game against Sri Lanka, to lead England home and unite the 50-over and t20 world titles.

Jubilation then for England who can rightly now claim to be one of the best white-ball sides of all time after completing their transformation from the dark days before the 2015 World Cup to become the epitome of modern limited-overs excellence.

And it confirmed Jos Buttler as the rightful captain of this side, winning a trophy in his first tournament in charge after taking over from Eoin Morgan last summer.

The first victory came when the game started on time in defiance of the gloomy forecasts all week that said both this and Monday’s reserve day could be wash-outs.

In the event no rain fell on Melbourne before the start and only minor showers fell during the game and if the Australian meteorology experts had almost as bad a World Cup as their cricketers then England also got off to a slightly nervy start in this final. 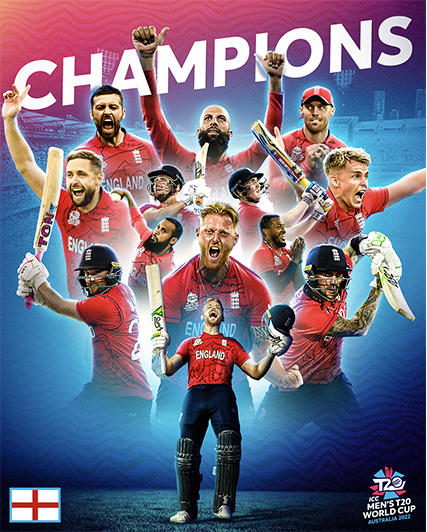