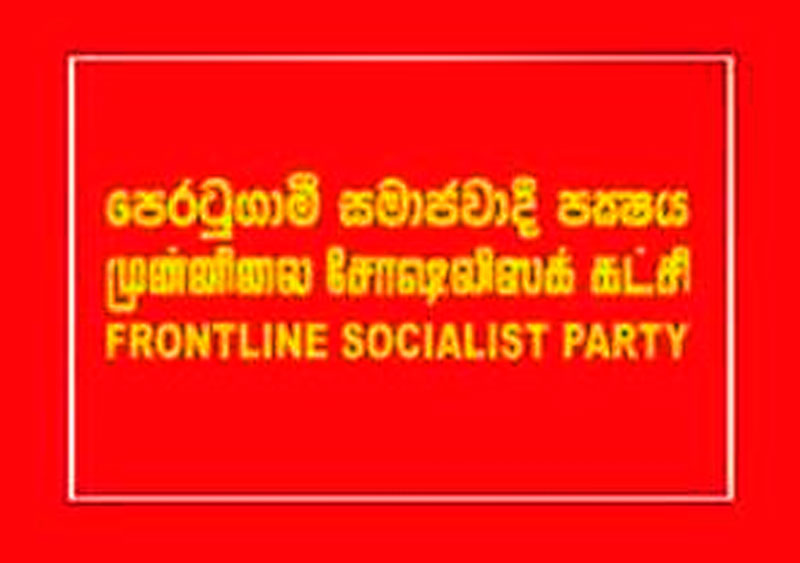 The Frontline Socialist Party (FSP) has urged the government to support a resolution before the United Nations to end the economic blockade and the terrorism-listing of Cuba.

In a statement, the central committee of the FSP said,

“On November 2nd and 3rd, at the United Nations General Assembly session, there will be an impending resolution to remove the economic sanctions the United States of America imposed against Cuba and remove Cuba from the list of terrorist states.

Since 1992, the United Nations General Assembly has presented and approved this proposal, but the United States was not ready to lift the sanctions.

For 30 years, the United States of America has been launching a vicious attack against the Cuban people despite the world’s opinion.

We, the Sri Lankan people leading the proletariat in Sri Lanka, vehemently condemn that attack.

The Cuban dictator Batista was ousted in 1959, and the Cuban people declared a socialist republic of Cuba; the United States openly began operations to destroy this small state. Since 1962, marking its peak, Cuban people have been under severe pressure due to 190 economic, commercial, and financial sanctions imposed against Cuba by the United States of America.

Removing some economic sanctions imposed by the Kennedy administration by the Obama administration in recent years was a good development. Still, it drew only a measly 15% of the Yankee sanctions.

The Trump administration that followed reinstated that 15%, imposed 243 more sanctions and designated Cuba a terrorist state a week before leaving office.

Naming Cuba a terrorist state will prove false because Cuba does not impose undue coercion on any country worldwide. Moreover, during the Covid pandemic, Cuba provided medical aid to many countries worldwide, developed Covid vaccines, and made them a global public resource. But today, accusations have been made against the United States, which names Cuba a terrorist state, of planning plots to assassinate the leaders of countries, maintaining extremist groups, exploding bombs in different countries in a conspiratorial manner, and spreading terror. There are no such charges against Cuba.

We interpret the economic blockade that prevents the Cuban people, who are suffering from the Covid epidemic and the financial crisis, from getting essential medicines and medical equipment and from getting fuel as a crime against humanity.

It is also unprecedented that this crime has been committed for 30 years while arbitrarily ignoring world opinion.

We, therefore, express our unconditional support for the proposal to the United Nations to end the economic blockade and remove Cuba from the list of terrorist states.

We urge the Sri Lankan government to vote in favour of that resolution. We are appealing to all the people worldwide to raise their voices for justice and fairness for Cuba.

Let us take this as an opportunity to express the fraternal solidarity of the people of Sri Lanka to the Cuban people to overcome this difficult moment.”