Government is to take stringent legal action against corrupt officials and interested individuals for trying hard to sabotage the present fuel procurement process to push the country into difficulties even by going to the extent of spreading false information and carrying out disruptive activities.

Minister of Power and Energy Kanchana Wijesekara has lodged a complaint with the Criminal Investigation Department (CID) yesterday to investigate into the Ceylon Petroleum Cooperation (CPC) and Ceylon Petrol Storage Terminals (CPSTL) activities and actions of individuals aimed at sabotaging fuel procurement and distribution   .

In a tweet, the minister said he requested to investigate into the fuel procurement, evaluation of proposals, non-placement of orders, selection of suppliers, delays in payments, distribution irregularities and also the allegations made by individuals within CPC and the CPSTL. 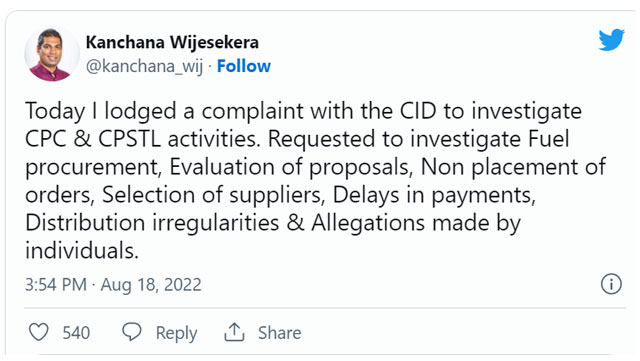 Sri Lanka is running out of options in importing discounted fuel directly from Russia following the refusal of the two of its companies sanctioned by the Russian Ambassador Yury Materiy to enter into procurement agreements with local authorities this week.

However these two Russian companies have conveyed their inability to supply oil on long term credit as well as the financial transaction issues of banks owing to Sri Lanka’s declaration of foreign debt default, Ceylon Petroleum Corporation (CPC) sources said.

The other reason was the refusal of foreign banks to open letters of credit (LoC) for purchases from the Russian Federation, sources added.

Thus the country has no other option other than placing orders with third parties who may be procuring the oil from Russia. There was also the risk of international banks refusing to underwrite LoCs when they come to know about the origin of the fuel.

Sri Lanka is gradually recovering from the fuel crisis triggered by dollar scarcity with the help of a handful of local agents of international fuel companies and suppliers with great difficulty facing challenges following the refusal of regular suppliers to bid for fuel procurement tenders, Energy Ministry sources said.

These regular suppliers were asking the pound of flesh like “Shylocks" demanding to pay their dues amounting US$ 735 million as soon as possible and make up font payments or bank deposits for them to enter into long term fuel procure tenders without considering the dire straits of the government.

Under this situation, the Energy Ministry had no option other than resorting to spot fuel purchasing procedure allowing a few protective suppliers to import fuel from international companies.

This arrangement has made possible for the Ceylon Petroleum Corporation to procure fuel shipments to tackle the severe fuel crisis and difficulties faced by the people who were forced to wait in queues for several days.

In order to keep on running the Sapugaskanda oil refinery, the Energy Ministry had contacted several countries including Oman and Russia holding discussions with embassies in the country as well , Minister Kanchana Wijesekera said..

“Even though we have requested firms, due to the financial situation and the ratings of the banks in the country most companies do not agree to get into loan schemes to get oil,” he added.

Ministry has given the permission for three companies to import crude oil and only one company he Coral Energy of UAE has agreed to bring in two shipments carrying Siberian crude oil, he said.

Several interested parties have made unfounded and baseless allegations of taking commissions by officials and individuals claiming that the purchasing prices of this company were too high.

This was an attempt to sabotage the government’s efforts to overcome the present fuel crisis which has paralysed the country, a top official of the government said adding that such actions and practices will make the situation  worse for the people.

The Ministry of Power and Energy states that the imported crude oil shipment is currently in the process of being unloaded.

The ship carrying 100,000 metric tonnes of crude oil reached the island on the 13th of August and unloading of the shipment commenced yesterday (18) following the quality sampling.

Accordingly, the Ministry of Power and Energy stated that the Sapugaskanda oil refinery will resume operations this week, after being temporarily closed down due to the crude oil shortage.

In addition, another ship carrying 120,000 metric tonnes of crude oil is scheduled to arrive in the island between August 23rd and 29th.