This group works within the party against Basil Rajapaksa’s dictatorial conduct.

Its top figures are being removed from parliamentary committees, with Alahapperuma, Prof. G.L. Peiris and Dilan Perera becoming the first victims.

The trio has been removed from the Committee on Parliamentary Business.

Prof. Charitha Herath has been dismissed from the Committee on Public Enterprises (COPE), which he had chaired, with the SLPP naming Sanjeewa Edirimanne, Nimal Lansa and Lohan Ratwatte named as its new members.

The speaker is due to unveil the final report on COPE members on August 29.

Furthermore, Dilan Perera as well as Prof. Nalaka Godahewa have been removed from the Committee on Public Finance.

Responding, Godahewa took to facebook today (18), saying “This time I’ve been removed from the public finance committee of the parliament in which I was a member since 2020. Whilst President is calling for an all-party gvt in public, is this how the government responds to those who express our views independently?”. 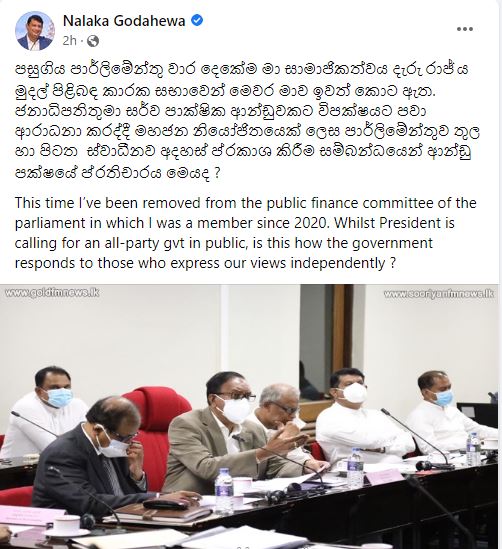