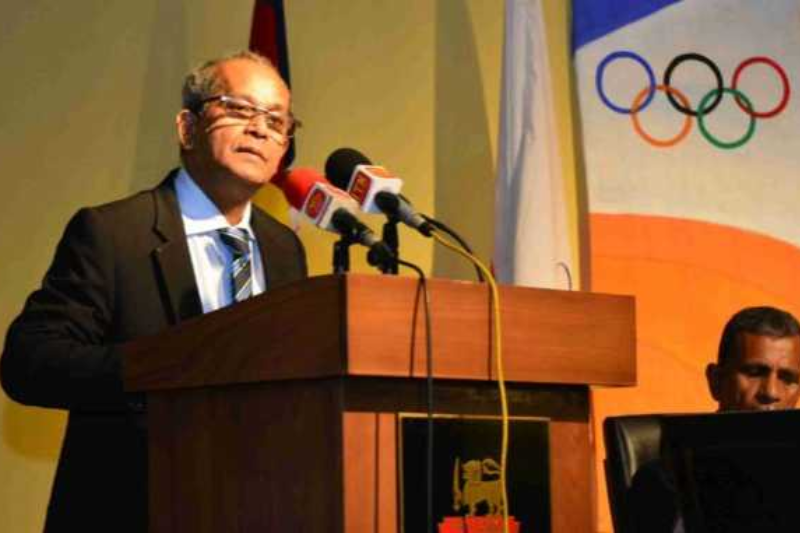 On May 6, Maxwell de Silva was the victim of a physical attack by two hooded assailants who entered his residence and assaulted him and his daughter.

Besides the attack, there is also a smear campaign by a section of the media on a 2018 incident of alleged misappropriation of NOC SL – an accusation even the auditors had not brought up at the time of question.

Mr. De Silva perceived the incident as a “cowardly” attack to destabilise the smooth progress of the NOC, and as an act of bitterness from certain individuals who have failed to reach the same level of international exposure and popularity that he has experienced within the Lankan sporting community.

Mr. De Silva explained that he has served in the position of Secretary-General of the National Olympic Committee since 2009 on a full-time basis without receiving any emoluments, just as past president Mr. Hemasiri Fernando did for nearly 12 years until he was appointed as the Secretary of the postal ministry.

He argued that since the NOC SL has reserves of well over LKR. 200 million, anyone devious enough to siphon off the money could have done so. Drawing from proceedings of the last two elections held since 2009, he added that attempts to tarnish the image of the NOC SL, its president, and its secretary-general, have been evident.

De Silva states that all funds given by the IOC are audited and reported by their own auditors as they continue to manage funds at NOC SL. To evince their good financial discipline, the appointment of well-respected double accountant Lalith Vithana into the position of co-chair of the finance committee was mentioned. This was considered a step forward as there was hardly anyone with a professional background overlooking the financial affairs of the organisation in earlier times.

NOC SL treasurer says that the organisation is clean

Longstanding Treasurer of the NOC SL Gamini Jayasinghe also commented on the incident and on the financial status of the organisation as he recalled some memories of the NOC SL over the past decade.

“I recognised the full-time service rendered by our past President Mr. Hemasiri Fernando for nearly 12 years and the present Secretary-General Maxwell de Silva since 2009, both without any emoluments. As the Treasurer I am proud to mention that there is no fraud, or any misappropriation of funds manipulated by anyone. The Auditor-General has given his report accordingly in every annual audit; however, there may be issues with processes and procedures which are common to any organization,” Jayasinghe said.

He also mentioned that the funds given by IOC are audited by their own auditor and have come out untainted, and that the IOC and the other allied organisations continue to fund NOC SL activities without question.

According to him, these were clear indications of good governance and good financial discipline. Lalith Vithana’s appointment was mentioned as a testament to their commitment to getting professionals as opposed to the previous practice of only including officials. He added that they were able to streamline the Accounts branch, impose new regulations, and maintain transparency in their processes.

“I have not used my name for personal gain”

Furthering his defence, Maxwell de Silva stated, “I have not used my position at any juncture for personal gain. When I sent my daughter overseas for higher studies, it was through my own funds. However, I have used my personal contacts for the benefit of the sports community at large.”

He also added that he never relied on his office to send any of his family relations to the NOA in Greece nor abused his influence within the NOC SL hierarchy as some people have.

He drew on the incident of handing over a contract to a person in question. The NOC SL 75th Anniversary Book was given to the then Finance Committee chairman’s wife’s company at Rs 2.6 Mn, and this was highlighted in the 2018 audit for 4 years. However, the commitment was never fulfilled.

He asserted that the quantity of work accomplished without any pomp or pageantry speaks for itself. Former short distance runner Shehan Ambepitiya received a deserving opportunity in Jamaica through an acquaintance that he had made. In 2014, Wrestler Chamara Milinda Perera was sent to Iran for a three-week training session before the Commonwealth in Glasgow and as a result, achieved a well-earned 5th place.

He added: “More recently two athletes Sheshan Dhananjaya and Sarangi Silva were recipients of a training stint in Qatar and Turkey in 2021. You can write reams about what we have done to the sports community without blowing the trumpet, but it was done through our personal contacts that we have developed over the years. The magic is that we have used them in the right context.”

Further emphasising the significance of good connections, he stated: “ (The late) former IOC president Jacques Count Rogge and the present IOC president Thomas Bach know me personally, but the three individuals that I mentioned above do not know how to approach any of them. In short, my accomplishments are my testimony and I have lived the IOC life to the fullest”.

The IOC is very clear about the status of the NOC SL or even the National Federations. Persons like Rohan Fernando and Preethi Perera who are against the present NOC SL administration were exposed to these arguments at the IOC and they should be aware of these facts. The NOC SL cannot be a government entity.” He offered an ultimatum, either remaining with the IOC, or sustaining a ban from it.

Maxwell De Silva did not hesitate to make the connection between M.H Usuph of the football community and the smear campaign. The allegation made against Mr. De Silva was about a monetary misappropriation.

He stated, “This is a personal vendetta against me. We have documents to prove that the three Blind Mice misdirected are using Usuph as a front for their smear campaign. Usuph’s grouse against is about an incident involving his daughter in snowboarding.” He was firm in his convictions that his distressing experience and smear campaign were linked.