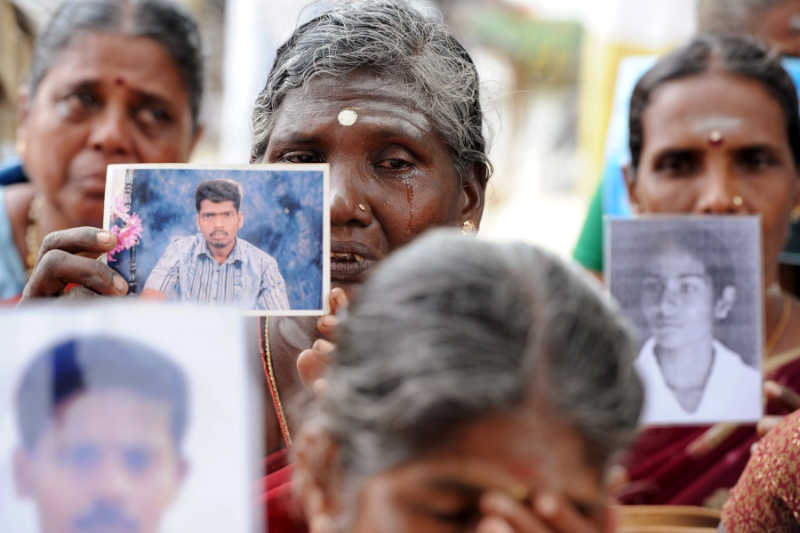 Mothers of the disappeared in Sri Lanka’s North have called on the South to recognize the decades-long struggle for Tamil independence and support it.

“Fighters in the South need to think, why the Tamil people were repressed and why they fought back in the past. They should understand that, and pressurize the government to give us the right to self-determination,” appeals Leela Devi Anandarajah, secretary of the Association of the Relatives of Enforced Disappearances (ARED).

Speaking to journalists about justice denied to the Tamil people even 13 years after the end of the war, she said that no matter what government comes to power, nothing will change in the country.

“One law is in force in the North and another in the South. This was best shown to us by the incidents of Ananda Sudakaran and Sunil Ratnayake,” she observed.

Based on one eyewitness who escaped, 14 soldiers were arrested and indictments were filed against 05 of them, by the Attorney General. However, Gajaba Regiment Staff Sergeant Ratnayake Mudiyanselage Sunil Ratnayake was the only Army officer to be sentenced to death.

Sunil Ratnayake who was sentenced to death, was also released on a presidential pardon by Gotabaya Rajapaksa after assuming the presidency, who had also served as an army officer in the Gajaba Regiment.

On the other hand, Ananda Sudhakaran - a political prisoner who has been detained for many years by the Sri Lankan government for his contribution to the struggle in the North - is yet to be released from the prison, even after being directed to release.

The Secretary of ARED points out that, with the people in the South facing the economic crisis that has been repressing the people of the North for decades, now the South should recognise the oppressive atmosphere in the North.

“Those in the South who are fighting against Gotabaya and Mahinda Rajapaksa should help us to find the disappeared children of Tamil mothers in the North and East. People in the South need to understand that we are fighting for justice for our children.”

A week ago International Truth and Justice Project (ITJP) in collaboration with Journalists for Democracy in Sri Lanka (JDS) released a damning report exposing the role of Sri Lanka's current president when he was an army commander in charge of the Matale district during the second JVP uprising.

Under his watch over 700 have disappeared in the late 80s.