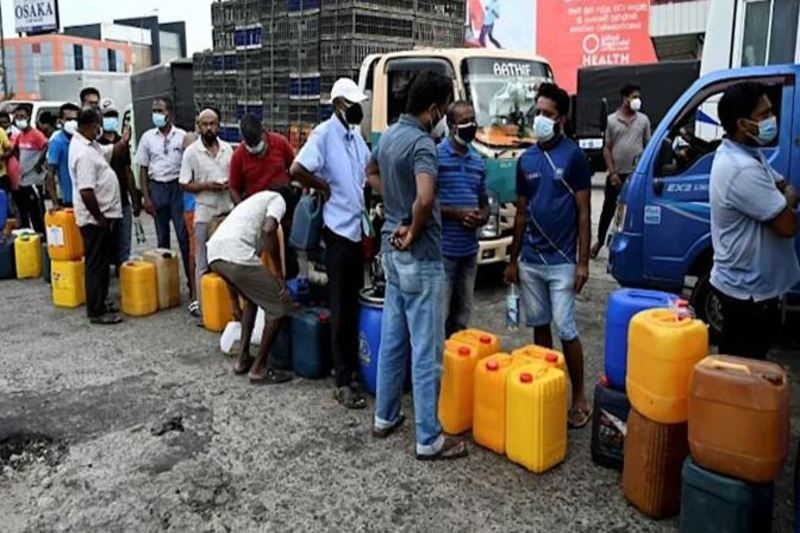 As Sri Lankans faint in day-long queues for fuel and swelter through stifling evening blackouts by candlelight, anger is mounting over the worst economic crisis in living memory.

A critical lack of foreign currency has left the island nation unable to pay for vital imports, leading to dire shortages in everything from life-saving medicines to cement.

Long lines for fuel that start forming before dawn are forums for public grievances, where neighbours complain bitterly about government mismanagement and fret over how to feed their families as food prices skyrocket.

"I've been standing here for the past five hours," Sagayarani, a housewife, told AFP in Colombo while waiting for her share of kerosene, used to fire the cooking stoves of the capital's poorer households.

She said she had seen three people faint already and was herself supposed to be in hospital for treatment, but with her husband and son at work she had no choice but to wait under the blistering morning sun.

"I haven't eaten anything, I'm feeling very dizzy and it's very hot, but what can we do? It's a lot of hardship," she said, declining to give her surname.

Trucks at the port are unable to cart food and building materials to other urban centres, or bring back tea from plantations dotted around Sri Lanka's verdant inland hills.

Buses that normally transport day labourers across the capital sit idle, some hospitals have suspended routine surgeries, and student exams were postponed this month because schools ran out of paper.

"I've been living in Colombo for 60 years and I've never seen anything like this," Vadivu, a domestic worker, told AFP.

The Ceylon Electricity Board said in a statement that they were "compelled to take demand management measures due to inadequate power generation, as a result of fuel shortage and unavailability of generators."

Many among Sri Lanka's 22 million people are no strangers to privation: throughout the global oil crisis of the 1970s, authorities issued ration books for essentials such as sugar.

But the government concedes the present economic calamity is the worst since the South Asian nation's independence in 1948, and a popular local quip now is that the rationing system at least offered some certainty that goods would be available.

A series of misfortunes have pummelled the country -- which emerged from decades of civil war only in 2009 -- in recent years.

Farmers were hit by a crippling drought in 2016 and the Easter Sunday Islamist bombings three years later, which killed at least 279 people, led to a wave of cancellations from foreign travellers.

The coronavirus pandemic then decimated a tourism sector already reeling from the attacks and dried up the flow of remittances from Sri Lankans abroad.

Both are critical sources of foreign cash needed to pay for imports and service the nation's ballooning $51 billion foreign debt.

He blamed years of chronic budget deficits, ill-advised tax cuts just before the pandemic that sent government revenue into freefall, and subsidies on electricity and other utilities that disproportionately benefited wealthier Sri Lankans.

The government has also frittered away public money on white-elephant projects, including a lotus-shaped skyscraper that dominates the Colombo skyline, with a revolving restaurant that now sits dormant.

Farmers responded by leaving their fields empty, driving up food prices, and months later the policy was abruptly dropped.

Sri Lanka is now seeking a bailout from the International Monetary Fund, but negotiations could stretch until the end of the year, and people are bracing for even leaner times ahead.

"I am expecting it to get a lot worse," Jafferjee said.

"Unfortunately, they are unable to contain it, because the people who created the crisis are still in charge of economic management."

'Pushed to the brink'

By night, as the orange hue of street lights illuminates Colombo's wealthier neighbourhoods, large pockets of the city are in near darkness.

Rolling power cuts that stretch for hours each day leave restaurants and corner stores trying to operate under dim candlelight. Other business owners give up and draw down their metal shutters for the evening.

Resentment is palpable and frustrations have occasionally boiled over. A motorcyclist was stabbed to death outside a petrol station last week after a dispute sparked by accusations of queue-cutting.

But most indignation is directed upwards to the administration of Gotabaya Rajapaksa, a member of a ruling family once beloved by much of the country's Sinhalese majority for bringing the ethnic civil war against the Tamil Tigers to a brutal end.

Support for the Rajapaksa clan has since gone into a tailspin, with an angry crowd this month attempting to storm the president's office.

Other demonstrations have for now been more subdued, organised through social media and taking the form of silent candlelight vigils during blacked-out nights.

"We've been pushed to the brink," said Mohammed Afker, an engineering student standing alongside thousands of others at a rally staged by a leftist opposition coalition.

The 20-year-old told AFP that day-to-day struggles had left him little time even to contemplate what he knew were poor prospects for finding work after he graduated.

"We're not even able to get essential items... We can't even make tea at home," he said.

"Our futures have become a question mark. We are here protesting because things need to change.