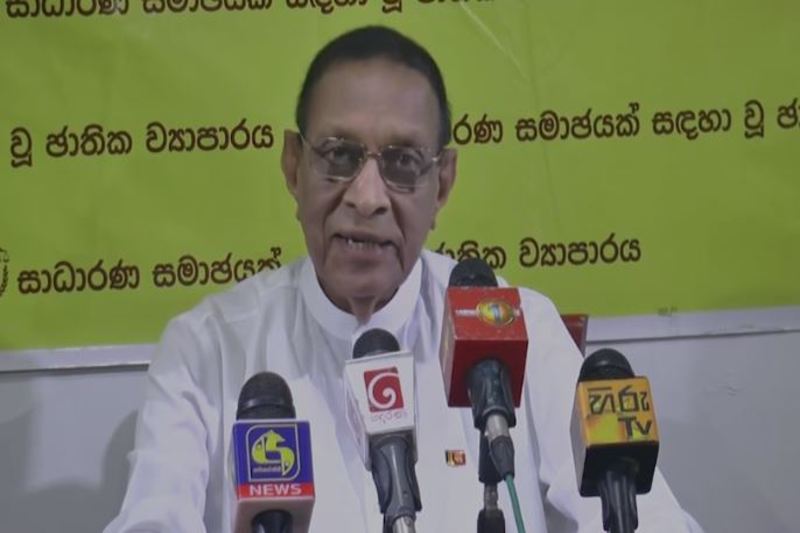 Governments that come to power with a large majority must bear in mind that they are merely the custodians of a country and not its owners, the chairman of the National Movement for Social Justice Karu Jayasuriya said.

Despite President Gotabaya Rajapaksa receiving over 6.9 million votes at the last presidential election, more than 6,2 million votes were cast against him, Jayasuriya said, pointing out that the government should have realised that the introduction of any constitutional amendments or drafting the constitution that would suit its political agenda and not the country such as the 20th Amendment would only lead to the deterioration of itself and the country.

Highlighting that the National Movement for Social Justice opines that Sri Lanka will no longer be a free country under the 20th Amendment, he warned that it will lead Sri Lanka towards a new feudal system and plunge the country into a severe political and economic recession.

Speaking at a press briefing today in Colombo, the former speaker said;

At a time when Sri Lankans are in the throes of an unprecedented crisis, we call on everyone once again to follow the example set by Ukraine and to join hands to formulate a common minimum programme to respond to the country's current crisis.

The fuel and electricity crises have disrupted the everyday lives of the people. The agriculture sector along with the economy has been completely destroyed. There appears to be a lack of consensus within the government on possible solutions, thereby further delaying the resolution of these many issues. Instead various parties to the government are presenting their own opinions on the matter adding to the existing chaos and confusion.

The only obvious solution to face a catastrophe of this scale is to at least temporarily form a united national front. However, it can only be built if the government extends the hand of friendship to all other relevant parties.

Focusing on these issues, the National Movement for Social Justice launched a programme. The proposal for this programme was prepared with the assistance of local and foreign academics and scholars under the leadership of renowned Sri Lankan scholar Prof. Rohan Samarajiva.

A majority of the leading political leaders who participated in the discussion agreed that these proposals were suitable to be taken up for initial discussion. There was also a positive response from religious and civil society leaders. It is noteworthy that several members of the ruling party have also shown interest.

The next few days of the week will be devoted to a public discussion entitled "A Minimal Common Programme to Respond to Sri Lanka's Current Crisis." We then intend to present a national resolution to the country after including proposals from various quarters.

In spite of these facts, the government should take immediate action to alleviate the sufferings of the people. Immediate solutions must be provided for the issues in transportation and electricity. The CEB can easily restore the power supply. If the railways and bus services collapse, the whole country will come to a stand still.

It must be noted that the state apparatus is continuously failing to take decisions based on one point of view and is instead issuing statements expressing varying opinions and decisions leading to further chaos.

For example, the President, the Minister of Finance, the Governor of the Central Bank, the Public Utilities Commission of Sri Lanka (PUCSL) and the Ceylon Electricity Board are all expressing different views on fuel supply these days. It would be a relief to the people and allow them to plan their work around the power disruptions

If they can stick to a proper time table for power disruptions in a specific area instead of announcing a lengthy time period during which they may experience many power outages, it would be a relief to the people and would allow them to plan their work accordingly.

During this harvesting season, the suffering of the farmers due to the lack of diesel is evident through media reports. Their grievances are heartbreaking. There is also a severe shortage of medicinal drugs in the country. This is a dangerous situation.

Our people are beset not only by shortages of essential items, but also by escalating prices. In the month of January alone, food inflation has risen by 24%. The main reason for this is the excessive printing of currency.

Just days ago, an unfortunate incident was reported where a father in the Welipenna area had taken his life after being unable to secure food for his children for nearly three days and how the wife was forced to sell two chairs to feed them.

We mention this incident only because we are aware that this is a situation prevalent across the country. Malnutrition is on the rise and needs to be addressed immediately. The contribution of the low-income and middle-class families cannot be disregarded.

At the same time, the rich have been given huge tax breaks. The government should realise that there is a serious social injustice here.

It must be said that what we have mentioned is the opinion of the majority in this country. Therefore, even in this dire situation, the government must be flexible and take the lead in the effort to save the country with the support of all.

We believe the leaders of the opposition will cooperate and act in a responsible manner. However, their support can be obtained not by summoning political dissidents to the BMICH and by retaliating through presidential commissions, but by initiating mutual cooperation.

It is the duty of the government to earn their trust. Engaging in political revenge but telling people that they abide by the ‘One Country, One Law’ policy only to blatantly violate it will not invoke their trust. It should be understood that the people do not approve of that process of the government.

The National Movement for Social Justice and the Collective for Ethnic and Religious Harmony are committed to reminding the government that constitutional amendments should be made with national consensus in mind, not according to their own mandate, needs and wants. It is an act of good intentions to prevent the recurrence of the Dark Ages in Sri Lanka.

In a new turn of events, 11 constituent parties of the ruling coalition led by the former President presented a set of proposals yesterday. While their suggestions have also come to our attention from time to time, each of these parties have reiterated the need for a national consensus.

We hope that the authorities will now understand the reality and act with great patriotism and love for the country."