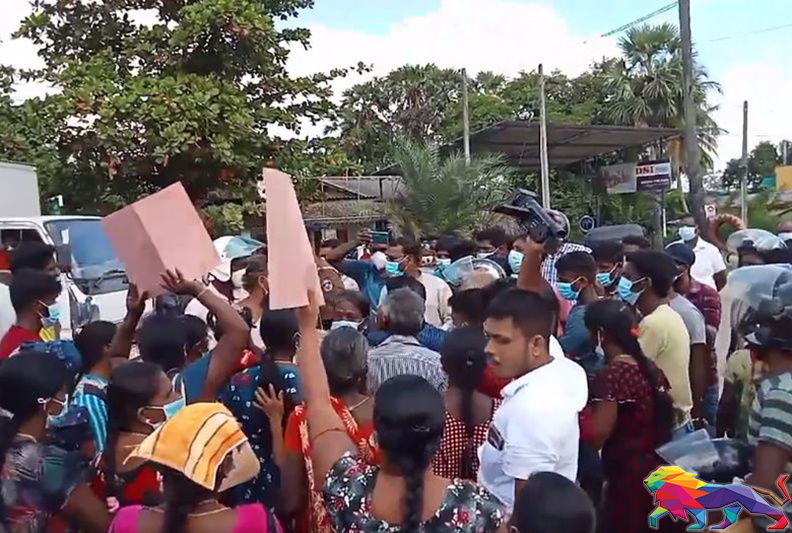 Local residents Oothuchenai, a village in Batticaloa bordering Polonnaruwa district, blocked a highway between Polonnaruwa and Colombo on Monday, in protest against rampant sand mining in their locality.

Located near Vadamunai, Oothuchenai also suffers from a poor road system and the protesters demanded that the road between their village and Velikanthai be renovated.

The neighbourhood surrounding Oothuchenai and Vadamunai is home to around 800 families and the Sri Lankan government has given permission to sand mining in Maduru Oya, a nearby river basin.

The mining activities, the locals argue, range beyond what is permissible and legal and over fifty heavy-weight vehicles pass through key routes near their villages, especially between Oothuchenai and Velikanthai, causing great damage to the roads, rendering them unfit for use.

As complaints lodged with relevant authorities over the months have not been fruitful, the locals decided to block the roadway in protest.

Hundreds of people participated in the protest, railing against indiscriminate sand mining which also inflicts harm to the environment and obstructs the habitat of elephants.

The protest ended when Velikanthai police arrived at the scene and assured the villagers that the damaged roadways in their neighbourhood will be renovated. The protesters also stated that their protest will continue if sand mining in their locality continues unchecked.