The devastation of Covid-19 on human health and well-being have been compounded by the adverse effects of climate change in our region which will bring about food scarcity in the coming year, UNP leader and former Prime Minister Ranil Wickremesinghe said.

He said that the strain on health systems and public finances will be endless given the persistent mutation of the coronavirus as the total global economic effects continue to mount.

He noted that the per capita income of many countries in the Indian Ocean Region will stay below pre-pandemic levels for several years according to the International Monetary Fund (IMF).

The former Prime Minister made these observations while addressing the 5th Indian Ocean Conference held in Abu Dhabi on Sunday (05).

He noted that the rising debt levels with less room for potential borrowings, sharp reduction of revenue and currency depreciation as well as the rise of US interest rates will further add to the debt burden of these economies.

This year's conference was held under the theme of “Ecology, Economy, Epidemic” where discussions centred on how the Indian Ocean region will combat the growing threat of climate change.

UNP leader Ranil Wickremesinghe is a former Chairperson of the Indian Ocean Conference, having held the position from 2016 to 2019. 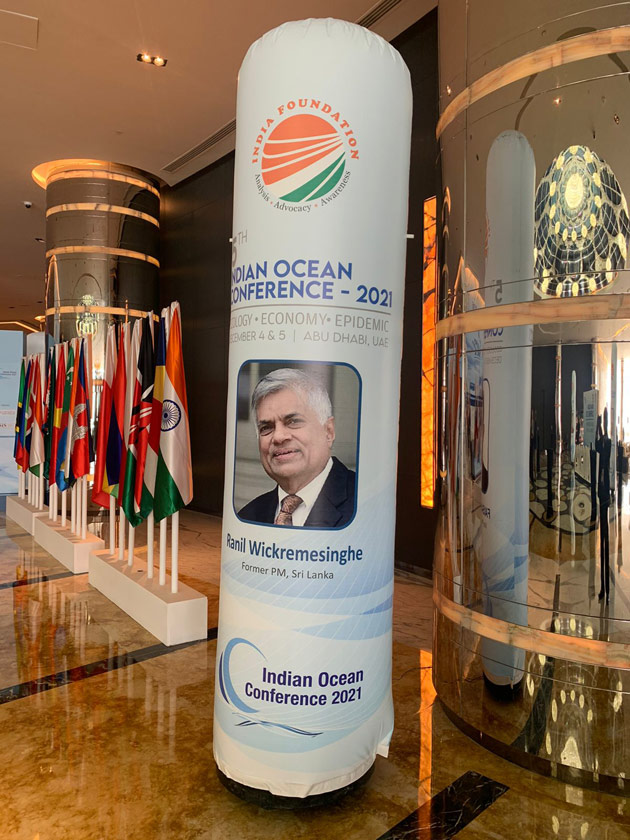 Maritime trade between Arab and Indian sailors was flourishing even before the first references to it in the Shatapatha Brahmana, the Indian text of sacred knowledge - possibly dating back to the 8th century BCE.

From then until the 16th Century, the sea and land routes of the Gulf and the Arabian Peninsula interlinked Asia, Africa and Europe forming a critical chain of supply.

After a lapse of a few hundred years, today, the Western Indian Ocean is regaining its strategic position. It is therefore fitting that this Indian Ocean Conference is held in the UAE – a key player in the Indian Ocean region and outside.

I thank the UAE Government which celebrated its 50 years of independence, for the hospitality afforded to all of us.

Since our 4th Conference in the Maldives, an unprecedented  paradigm shift is taking place in the Indian Ocean. The dynamics and intersections of ecology, the economy and the Covid-19 epidemic have surfaced new transnational security challenges to the Indian Ocean Region (IOR) amidst intensifying geopolitical competitions.

As a result, regional economies will undergo fundamental structural changes having far reaching impact on the future of this region.

Climate change is occurring much faster than predicted and may cross the global warming level 1.5 C in the next decade.

The IPCC Assessment Report No. 6 Climate Change 2021 – The Physical Science Basis has revised the time frame for global zero emissions.  The Indian Ocean is the most rapidly warming ocean in the world.

South Asia will be the most detrimentally affected sub region where the retreat of the Himalayas, which feeds 10 major rivers, will be catastrophic. Rising sea levels will put many coastal areas in South Asia at risk of flooding. The anticipated plight of the Maldives is already known.

Yet, despite significant progress in renewables in Asia – China, India, Bangladesh, Indonesia and Vietnam, their target dates for eliminating emissions goes beyond 2050.

Given that economic growth in the region is being powered by India, Indonesia and Bangladesh, we are caught at an intersection where the economy and ecology comes together.

Coal is required by these countries for sustained economic growth yet the utilisation of coal beyond 2050 will exacerbate global warming.

The Glasgow COP 26 World Leaders Summit Breakthrough Agenda with its prolonged discussions on ‘phase out and phase down’ further highlighted the predicament of this region.  Even if emission cuts begin immediately, the GDP shortfall will be between 3 to 12%.

These crosscutting challenges of ecology and economy have been brutally intersected by the Covid19 pandemic - which has caused a global economic slowdown - a possibility that was unthinkable at our last Conference in 2019.  Thus, the economic costs of achieving  net  zero emission are crippled by the economic cost of Covid-19.

The devastation of Covid-19 on human health and well-being have been compounded by the adverse effects of climate change in our region. In fact, the erratic monsoons, increasing droughts, and reduction of fish stocks arising from the changes to ocean water is poised to bring about food scarcity in the coming year.

And of course, the strain on Health Systems and Public Finances are and will be endless given the persistent mutation of the virus. The total global economic effects continue to mount.

We are all aware of how the recurrent lockdowns have driven large numbers of people into poverty and many others who were on the threshold of middle class to subsistence levels.

The overloaded Health systems are neglecting the treatment of other illnesses and diseases. Therefore, most countries are increasingly vulnerable to other epidemics, that easily become pandemics. The National Education systems are disrupted. Furthermore, the resources for Education in some countries are being reduced to increase the allocations for health.

It is also disrupting the social fabric of all countries including an increase in reports of addiction and domestic violence. There will be an accrual of these, and further costs, given the culmination of the destructive impact of the pandemic in escalating social and political tension.

Economic consequences of the pandmic

According to the IMF, estimates of the economic consequences of the pandemic include,

The rise of US interest rates will further add to the debt burden of these economies. Yet apart from these economic shocks, the loss to Asia from climate change is 5 to 6 times greater than our western counterparts.

The ensuring human displacement, migration and construction of new human habitation caused by the ecological changes will be an intolerable burden on the affected countries in a region given their limited resources to combat climate change.

Depressing as it is, we need to understand that a further downturn of our economies will reduce the resources for development already being eaten up by the increasing ecological and pandemic costs in an intersecting, downward spiral.

Yet, we cannot discuss the IOR without accounting for another intersection - that of geopolitics  - the simmering power rivalries between US and China in the IOR.

This picture becomes even more complicated by the addition of the AUKUS military alliance which also covers the Indian Ocean.

These developments in an  increasingly multipolar world order will bring about regional instability in the Indian Ocean.

The entanglement of great power rivalry in the Indian Ocean risks removing the focus on the public health shortfalls, digital inequalities, education disparities, unemployment and social fragmentation in some of our countries. The end result will be a further de-stabilisation of the IOR.

A post Covid-19 global economic turnaround will be determined by the timeframe of the vaccine rollout not only in advanced countries but in all countries.

"Low vaccine rates in Southern Africa have led to the emergence of the Omicron variant."

The Covax arrangements to supply vaccines have been wrecked by the advanced economies capturing the vaccine market and stockpiling vaccines. India’s output is required for domestic needs. Therefore, the emerging and developing economies of the IOR are lagging behind.

Some have yet to vaccinate half its populations. The low vaccine rates in Southern Africa led to the emergence of the Omicron variant that is currently reaching the shores of many countries.

Thus, ironically, the output of the advance economies, which benefited from early vaccine supply, are forecast to exceed the pre-pandemic level output losses.

Never have countries become more conscious of their interlinkages to and dependencies on one another. The delay in a vaccine supply for IOR countries as well as the delays in providing financial policy support will result in medium term output losses.

The resulting divergence in the economic development prospects between advance economies and IOR economies will only widen the gap that has to be bridged by the region’s economy.

Thus, the emerging picture is not at all favourable to the IOR which is already falling behind on the implementation of the Sustainable Development Goals.

The intersecting economic setbacks from Covid-19 and impediments from accelerated climate change as well as the US – China rivalry have a potential to become a critical drag on this region that could prevent its potential to be the next global economic growth pole.

In such a scenario, the growing presence of advanced economies of Europe as outside players in the region could result in a throwback to the 17th and 18th Century Indian Ocean scenario -  with more powerful outside powers dominating the weakened Indian Ocean states.

This is a wake-up call for our region - for effective regional cooperation.

The lack of a regional architecture and its underpinning structures were discussed exhaustively at our 3rd Conference in Hanoi. The need for a new cooperative architecture was also highlighted at the Goa Maritime Conclave recently.

We have to now move forward without delay.

Focus on the Indian Ocean Region

The Southern and East African countries of the IOR have sub regional economic cooperation arrangements as well as the African Trade Agreement.

This sub region is covered by the Gulf Cooperation Council (GCC). The most populous and important sub region from Iran to Bangladesh is left uncovered.

India will become the second largest global economy while Bangladesh and Pakistan will also be leading economies by 2050.

The South Asian Association for Regional Cooperation (SAARC) has yet to hold the next summit. Much more ground has to be covered before the Bay of Bengal Initiative for Multi-Sectoral Technical and Economic Cooperation (BIMSTEC) reaches this stage.

The lack of a regional architecture and its underpinning structures were discussed exhaustively at our 3rd Conference in Hanoi. The need for a new cooperative architecture was also highlighted at the Goa Maritime Conclave recently.

We have to now move forward without delay.

Establishing a Regional Architecture to promote a Regional Agenda to address the intersecting challenges of the IOR’s economic cooperation, climate action, geopolitical security and now the global pandemic must be our priority.

A Regional Agenda which includes the following points:

# UN General Assembly’s discussion on Covid-19  to be continued to reach an agreement on a common agenda and protocol for the mitigation of pandemic at global and national levels;

# Negotiation with the IMF to provide additional fiscal space for the heavily indebted regional economies;

# A demand for action to immediately establish a US 1 Trillion Dollar Climate Change Fund;

The IOR Regional Agenda must be strong enough to ensure stability in the Indian Ocean by preventing militarisation.

Asia is at the starting line of an arms race, with emphasis on aircraft carriers, nuclear powered submarines and 5th Generation combat aircraft.

If ignored, such race would divert much needed funds for climate change. Therefore, the Regional Agenda must include effective maritime governance including the freedom of navigation and undersea cables.

It must be an Agenda to ensure stability by preventing militarisation.

This is IOR’s 5th Conference. Given the uncertainties of the future, this is when we should commence to walk the talk.

On the flanks of the IOR are the APEC and the African Agenda 2063.

Without an architecture of regional cooperation to implement an integrated and effective Regional Agenda for Climate Action, Economic Growth, Regional Security, and Pandemic Mitigation, IOR’s aspiration to be the next global economic growth pole will never be fulfilled.

Therefore, we must act without delay. The starting point is the need for a summit of all the Indian Ocean Leaders sooner than later.

The fate of the Indian Ocean is in our hands."