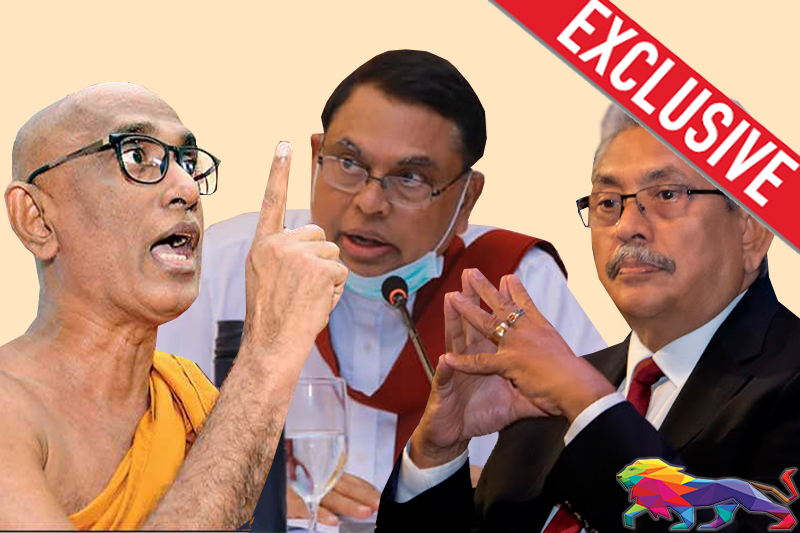 Internal sources of the government claim the meeting between President Gotabaya Rajapaksa and government party leaders yesterday evening (29) had ended on a sour note, following a heated exchange of words between those attending.

The meeting had been called by the President to discuss the issues relating to the controversial Yugadanavi power plant deal and other issues of contention between the government and 11 government aligned parties.

According to sources, the meeting which had commenced at 5.30 pm had lasted till 10 pm, only to end inconclusively and without success.

According to sources, the President's decision to appoint Galagoda Aththe Gnanasara Thera to lead the Presidential Task Force to implement the ‘One Country, One Law’ policy had also been a topic of discussion at the meeting.

Minister Wimal Weerawansa had pointed out the public displeasure and criticism against the appointment while Gevindu Kumaratunge too had gone on to explain the situation. He had noted that many parties are viewing the appointment as an insult to the Sinhala Buddhist community as well as the Sangha community in Sri Lanka.

However, Finance Minister Basil Rajapaksa had defended the decision claiming the President had a constitutional right to make the appointment. While the government party leaders had continued to voice their dissent on the decision, they had stressed this latest appointment cannot be accepted.

Further discussion had led to a heated exchange of words between the parties with Basil Rajapaksa going on to once again state the President can appoint anyone as he wishes after receiving a mandate of 6.9 million votes.

While Minister Gammanpila had noted the President was only able to secure such a mandate with the support of the other parties represented by them, incensed by remarks made by Basil Rajapaksa, Athuraliye Rathana Thera had stressed he will continue the struggle on behalf of the people even at the risk of losing his parliamentary seat.

Addressing Basil Rajapaksa directly, Rathana Thera had said he is unafraid and would not bow down to any threats made.

Explaining his position the President had merely stated the appointment of Gnanasara Thera to the position was made in an attempt to help Justice Minister Ali Sabry to implement the ‘One Country, One Law’ policy.