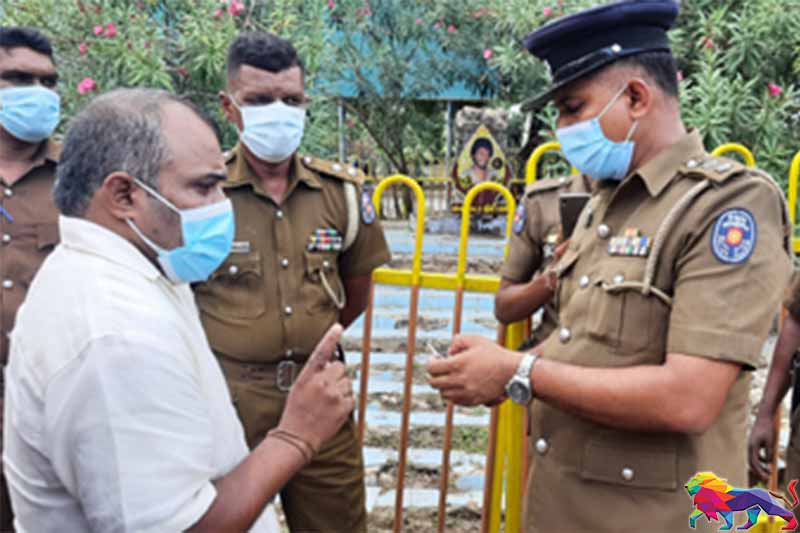 Allegations are mounting that the Sri Lankan police are continuing to obstruct the rights of Tamils to commemorate the dead by citing Covid 19 health regulations and criminal law provisions.

Jaffna Police arrested Selvarasa Gajendran, a Member of Parliament who attempted to commemorate LTTE Lieutenant Colonel Rasaih Parthipan alias Thyagi Thileepan, who is revered for sacrificing his life in a deadly fast for the Tamil liberation struggle. Gajendran has since been released on bail.

MP Gajendran and Member of the Jaffna Municipal Council S. Rajiv Kant and Tangaraja Raja Sri Skanda, an aide to the MP, were arrested by police without a warrant just the day after the president pledged to world leaders at the 76th General Assembly of the United Nations that he was committed to reconciliation.

In 2010 Sri Lankan Government forces destroyed a memorial erected to commemorate Thileepan near the Nallur Kandaswamy Temple. The MP had attempted to light a lamp inside the fence of the destroyed memorial to mark Thileepan’s 34th death anniversary when a policeman in uniform had kicked the offerings. This had been captured by media personnel on sight.

The videos also depict the MP being manhandled during his arrest.

The Jaffna Police have released the three arrested persons on police bail and they have been directed to appear before the court on September 27 on charges of violating the quarantine law.

According to Northern correspondents, the Jaffna Police has obtained a restraining order from the Jaffna Magistrate's Court banning the celebration of Thileepan under quarantine laws from September 24 to 27.

Thileepan died on September 26, 1987 while fasting in front of the University of Jaffna.

Ban on memorials in the East

Hartal in the North last year

Last year too, the Court had issued orders preventing the commemoration of Rasaiya Parthipan.

Residents of both the North and the East called for a successful hartal from Monday morning (28), in protest of the government's September 2020 ban on the commemoration of Rasaih Parthipan, with the assistance of the Courts.

The hartal is considered to be the largest mass protest launched since the Gotabaya Rajapaksa-led government came to power.