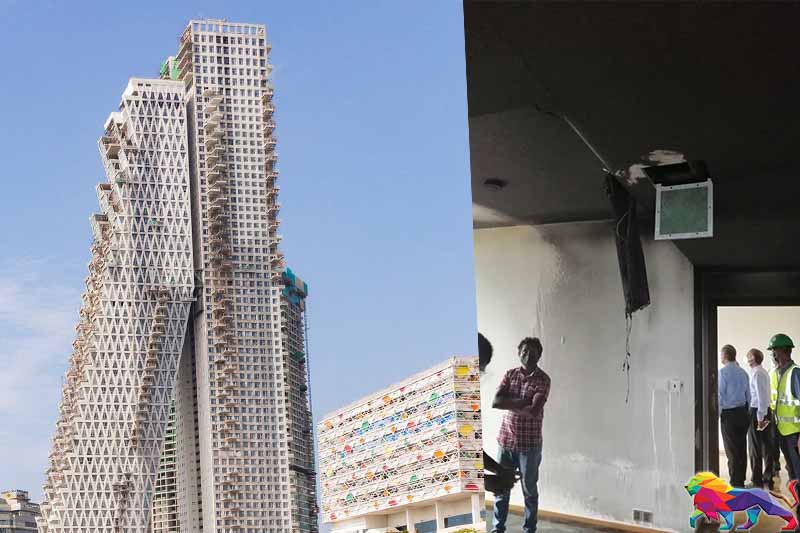 The Fire Service Department has launched an investigation into the failure to notify the relevant authorities of an alleged fire that broke out in a two-story luxury apartment complex in Slave Island recently.

Chief Fire Officer of the Fire Department K.A. Wilson speaking to 'Aruna' observed that the Fire Service Department should have been notified if there had been an emergency, but it had been secretly extinguished by the developers.

The fire, which was accompanied by smoke, is suspected to have been caused by an electrical leak. The fire was put out by the developers on site while they had not informed the Slave Island Police or the Colombo Fire Department as required.

Accordingly, an investigation team will be sent to inspect the housing complex today (23), Chief Fire Officer K.A. Wilson has said.

The architects of the project have made serious allegations against the developers of Altair Tower.

Highlighting the importance of compliance of planning regulations, approved drawings, life safety for all occupants such as loss of life or injury through fire etc., the architects in the letter accused the developers of going by shoddy Indian standards of building. According to them, these concepts appeared to be alien to the developers whose exposure was limited to the building standards of West Bengal where such concepts are unheard of, based on the communications with the architects prior to the incident.

The architects also made the following observations:

a. Such QC/QA processes were followed to a large degree up to March 2021 with our continued presence at Site to ensure necessary supervision of the works. Our letter of July 2021 refers.

b. From March 2021 there was limited or zero supervision by QP (This dilution of legal requirement was also condoned by Shamahil Mohideen of the SAO office, who is of accounting background and zero major project or ultra – high-rise project background)

c. We have understood there are major non -compliances, failure to carryout previous directions and attempts to make further changes without seeking professional advice that compromises.

d.Thus, there is no question of applying for COC “forthwith” until rectifications notified here and future inspections are to be carried.

e. To clear the ignorance of those currently managing the project listed below, let it be loud and clear that we are not paper pushers and COC is not a paper exercise.

They also highlighted several issues of non-compliance on the part of the developers.

a. Issue of Atrium creation and removal of natural ventilation from escape passages L 40 and above

b. Newly introduced combustible material as underlay in all Bedrooms, pre-insulated ducts.

c. Pressurisation Staircase testing function and not testing as per international methods of testing

The architects also noted that while taking professional and legal liability for the safety of the building, this building is in no state to be certified as illustrated by the fire incident on September 21.

However, it is suspected that the foreign developers of the tower had attempted to conceal the major fire incident as a number of people including high level businessmen have already reserved apartments in the tower at a cost of millions of rupees.