Former Speaker Karu Jayasuriya says that it is now very clear that the crisis facing the country cannot be overcome by arrogance of power or the repression of political opponents by acting arbitrarily.

He said that the solutions to the serious crises Sri Lanka is facing today cannot be solved through directives based on threats and terror.

The National Movement for Social Justice headed by Karu Jayasuriya recently facilitated an open dialogue of opposition parties and groups in Parliament where representatives of many political parties, including the United National Party, Samagai Jana Balawegaya and the Tamil National Alliance took part in the discussions.

Issuing a statement on Friday (23), the former Speaker presented the issues that were discussed and fundamentally agreed upon by the opposition political parties present at the discussion. 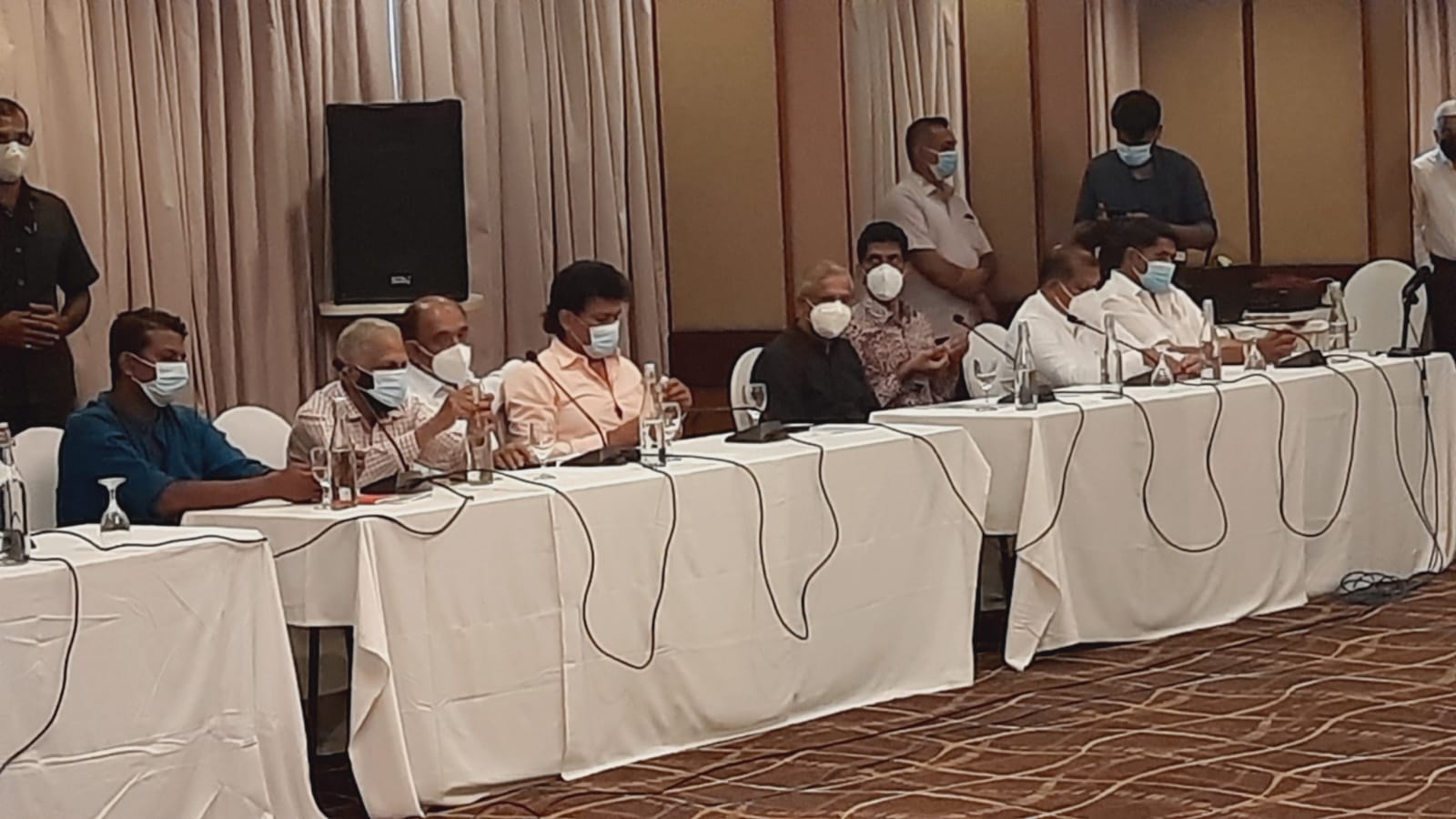 "The whole country saw how a majority of political parties represented in the Sri Lankan Parliament came together on one common platform.

Although there are a number of reasons to consider it a special event, the most important point is that none of the political parties that agreed to take part in this conference had imposed any preconditions.

They came together because they realised that it was in the national interest to pay more attention than ever to the serious crisis facing democracy in this country.

This is because every political group in this country has a correct understanding of the enormous pressure being exerted by the general public representing all communities in Sri Lanka.

It is because they all understand that the future of this country will be ruined if the country does not face this catastrophic situation by uniting political and civil forces.

It is now evident there is no alternative but to unite to face this challenge and save this country.

Therefore, it is very important for the country to join forces in this endeavour. All religious leaders, intellectuals, trade unions and civil society movements in this country, especially the Maha Sangha, have placed high hopes and are pleased at the turn of these events and have extended their blessings.

Accordingly, we would like to pay our respects to all the political parties and their leaders who recently joined the common platform.

The National Movement for Social Justice played a coordinating role and we initiated it with the utmost sincerity.

We have no expectations of a leadership role or any other narrow political agenda.

We do not expect such things in the future either.

However, on any given day, we will stand without any hesitation to fulfill our responsibility for the country.

That is, any political party in this country has a policy and a vision that is unique to every political force.

It is absolutely necessary. But in such a joint representation, their consensus on matters of national importance, as well as on a number of crucial points at a time when the entire nation is in grave danger, will be extremely important. We consider it to be a very good trend.

In fact, the people of this country should also pay attention to the issues that were discussed and fundamentally agreed upon by the opposition political parties at that time.

They are as follows.

1. In order to overcome the economic crisis, short-sighted economic management must be completely changed. It is not that those responsible were unaware that the challenge of repaying the huge sum of money that had been embroiled in various governments for years would reach its peak from 2019 onwards.

# It is necessary to identify the country's economic priorities while balancing fairness and efficiency;

# Real commitment to reduce waste and corruption must be demonstrated and strengthened through institutional framework;

# Efforts should be made to increase productivity and to appoint truly qualified candidates;

# We need a tax system that eases the burden placed on the people while ensuring government revenue.

2. The disastrous 20th Amendment must be reversed to ensure the stability of democracy.

# Immediate action should be taken to appoint impartial officers instead of political allies to the commissions including the Election Commission;

# The independence of parliament must not be compromised and should be freed from the grip of the executive;

# The political balance and independence of the Constitutional Assembly must be ensured;

# Politicisation and militarisation of the public service must be blocked.

3. The independence of the judiciary must be ensured.

# The arbitrary power of the executive to appoint judges to the higher courts must be overseen;

# A mechanism should be created to prevent all interference in the judiciary.

4. Human rights must be upheld and the rights of every individual and community must be established to the satisfaction of all.

# The quarantine laws compiled by the health authorities should be properly legislated and used for the benefit of the people but they should not be misused to suppress people's rights.

# Problems that have arisen in the fields of education, environment, agriculture, etc. should be addressed immediately and the repression of organisations and their activists who point out such problems should be stopped immediately.

# We strongly oppose any action taken to suppress social media and the freedom of expression of the people and emphasize the need for an independent media regulation mechanism.

The leaders of political parties who reached a preliminary agreement on the above issues pledged to lay the foundations for building a strong and secure country that would ensure the welfare of the people from that day onwards.

Furthermore, the leaders of the political parties paid attention to another special issue with regard to affirming national unity.

Emphasis was placed on their commitment to the future of Sri Lanka, which must be built collectively by all parties who safeguard the dignity of the entire people of an indivisible country.

That is a very important point because in order to build the future of Sri Lanka as a prosperous, peaceful and developed country, we must all work with such broad national consensus.

Accordingly, as an organisation, we once again pay our gratitude to all the political parties and the strength that we showed here will enable us to face off against any elements of injustice in society. 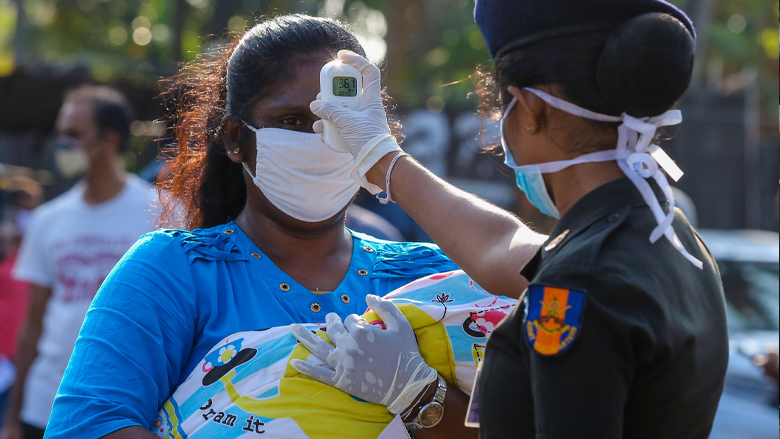 I would also like to express our views on an issue that deserves special attention at this moment.

The serious warnings issued by medical experts regarding the Covid-19 pandemic.

Medical experts point out that the rapidly spreading Covid-19 variant known as 'Delta' could create a very dangerous situation in the country.

They have also warned about a possible fourth wave which is a serious situation.

In the face of such warnings, we as a country need to pay more attention.

The government as well as the people have to act responsibly. The government must lead by example and demonstrate it to the country first.

In any case, the government should refrain from acting in a manner that would provoke the masses.

At the same time, the fight against the Covid-19 pandemic should be handed over to the health sector of the country.

While it is essential to seek the full support of other services, including the Armed Forces, policy decisions and plans regarding the fight against coronavirus should be initiated and monitored only on the recommendation and guidance of experts in the country's health sector.

We would take this opportunity to reiterate the importance of such a process.

It is now very clear that the crisis facing the country cannot be overcome by arrogance of power or the repression of political opponents by acting arbitrarily.

In short, solutions to the serious crises Sri Lanka is facing today cannot be solved through directives based on threats and terror.

Also, the rulers of this country today should not have faith in the power gained by the 20th Amendment.

It is about the consent of the people and the present rulers should now pay sincere attention to the voices of the people. Only a person with little or no understanding of politics would agree with the 20th Amendment.

Except for the henchmen of the ruling alliance, the erudite people of this country have opposed it.

According to a survey held on the 20th Amendment, 86% of those who participated in the survey had opposed it..

Therefore, the government needs to gain a proper understanding of the people's mindset regarding this as well as the plethora of other issues that have plagued the country.

The majority of the people today are unhappy. Therefore, the rulers of this country must first and foremost pay attention to the way the people think.

If not, the fate of the present government would encounter devastating consequences."