The U.S. has agreed to donate another stock of the Moderna Covid-19 vaccines to Sri Lanka, government sources said.

Sri Lanka received of a stock of 1.5 million doses of the Moderna Covid-19 vaccines, donated by the U.S. through the United States Agency for Development (USAID), and made available through the COVAX facility of the World Health Organisation (WHO).

Former U.S. Ambassador to the United Nations Samantha Power, who was recently appointed as the Administrator of USAID by President Joe Biden, is considered to be a friend of Sri Lanka.

Although Health Minister Pavithra Wanniarachchi was at the Bandaranaike International Airport (BIA) to receive the stock of vaccines which arrived in the country on July 16 via a special flight chartered by Qatar Airways, heads of government who were present at the BIA to receive vaccines donated by China were conspicuous by their absence.

Despite receiving 1.5 million Covid-19 jabs donated by the United States, the Sri Lankan Government was cautious to refrain from giving publicity accorded to similar vaccine donations.

The pro-Chinese and anti-American stance adopted by certain nationalist elements within the ruling coalition could have been a reason for this, political analysts said.

Furthermore, government officials and local agents involved in purchasing vaccines for Sri Lanka seem to be actively lobbying to procure the Chinese made vaccines, they noted. 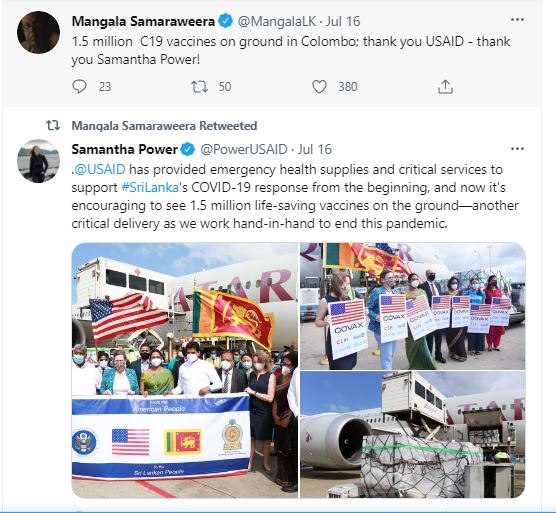