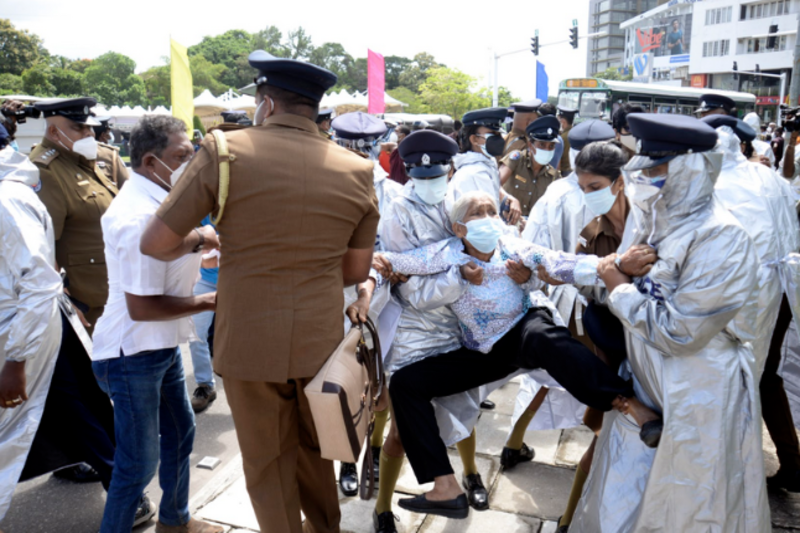 The Bar Association of Sri Lanka (BASL) has expressed grave concern over the spate of arrests and detention of peaceful protesters by the Sri Lanka Police.

In a letter addressed to the Director General of Health Services, Dr. Asela Gunawardena and Inspector General of Police (IGP) Chandana D. Wickramaratne, the BASL has stressed that authorities should not use quarantine as a punishment or mode of detention.

The BASL noted that the acts of forced detention in quarantine centres are arbitrary and unlawful, and are an affront to the judiciary that have released the said persons on bail.

Furthermore, the BASL alleged that the health guidelines issued by the Health Services Director-General have not listed public protests or outdoor meetings as prohibited activities. 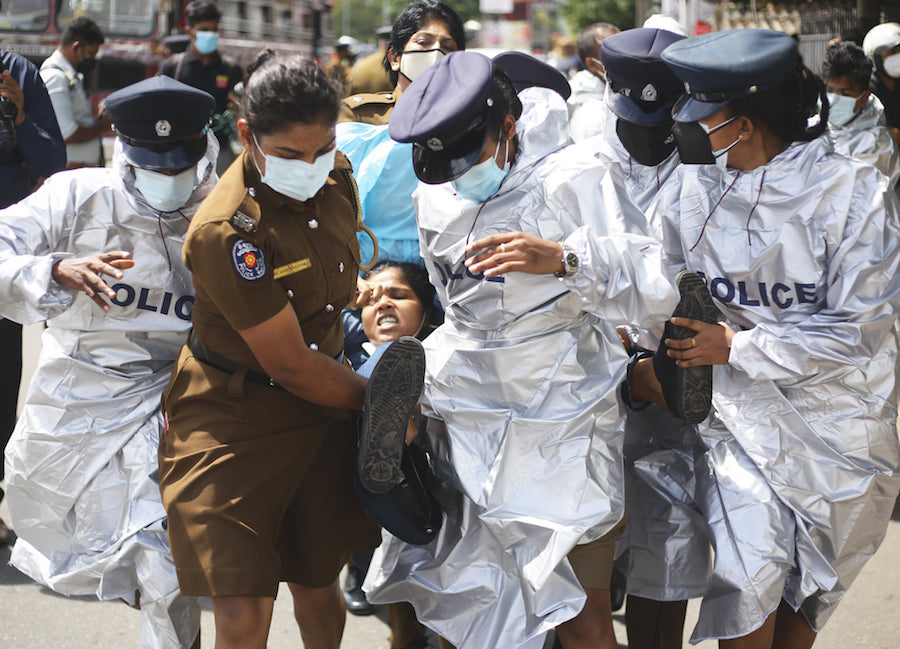 "During the past few days the Sri Lanka Police has carried out a number of arrests of persons engaged in peaceful protests on different issues and produced them before courts of law.

Public protests also strengthen the Freedom of Thought which is entrenched as a fundamental Right by Article 10 of the Constitution.

The rights under Article 14(1) may be restricted by law in the interests of public health, however, such restriction must be done by law, must have a nexus to the objective sought to be achieved and must be reasonable.

The BASL has carefully perused the Health Guidelines issued by the Director General of Health Services.

The said Guidelines permit several indoor and outdoor activities. These include inter alia the operation of spas, supermarkets and restaurants.

They also allow the opening of liquor shops and also permit exercise and jogging outdoors.

However, by the said Press Release issued by the Police Media Division the media has been informed that the Inspector General of Police has received a communication from the Director General Health Services that public meetings and protests involving mass gatherings should not be permitted due to the risk of the spread of COVID-19.

As such, meetings and protests which are carried out in compliance with Health Guidelines are not prohibited.

The BASL is firmly of the view that any organized protests should be carried out in a manner that it does not pose a risk to public health and that persons who intend to participate in protests or marches or similar exercises must ensure that they conform to health guidelines in their own interest and in the interests of the general public.

However, at a time the Director General of Health Services has thought it fit to ease restrictions previously imposed, the BASL sees no reasonable cause whatsoever for the Police to act in a heavy-handed manner when dealing with protesters. 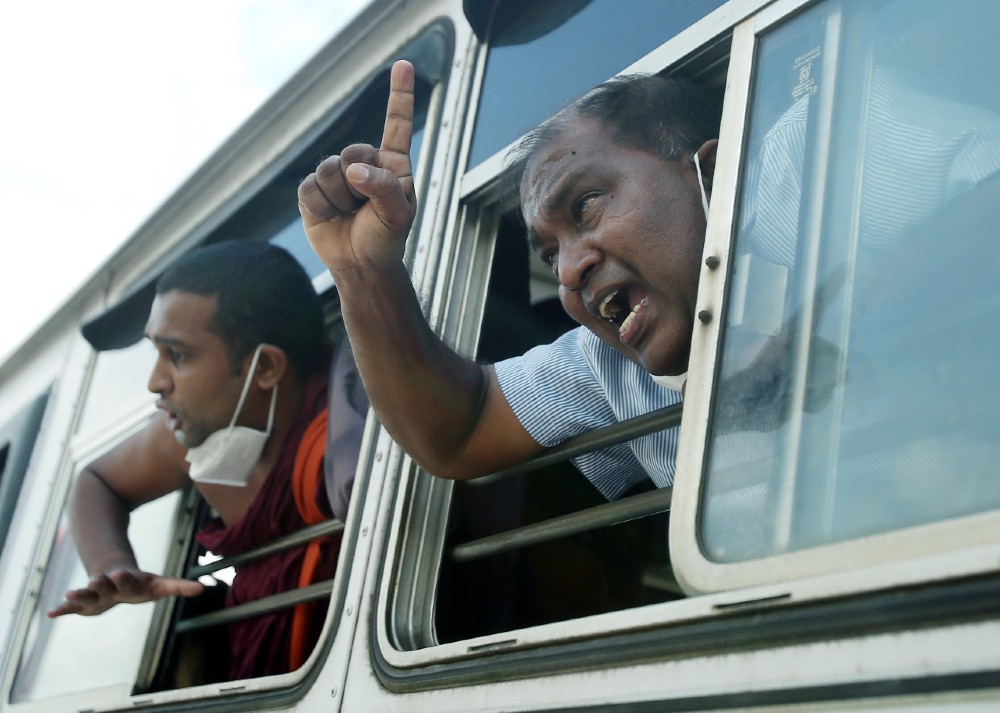 Ceylon Teachers’ Union (CTU) General Secretary Joseph Stalin (R) said that the group of protestors had been forcibly taken to the facility from Court premises on Thursday, even though the Magistrate said she had no powers to order them to be quarantined. (PIC: Lalith Perera)

In certain instances, after such protesters are released on bail by the Magistrates before whom they were produced, they have been taken away against their will to quarantine centres by Police officers, sometimes without even informing them or their families of where they were being taken.

The BASL has taken note of several instances and is deeply concerned as to how Individuals after having been granted bail have been forcibly seized from the precincts of the courthouses and sent to quarantine against their will.

There is scant evidence that such decisions were based on the advice of health officials such as Public Health Inspectors. Compounding these concerns are the fact that by now even persons infected with COVID-19 and their first contacts are being quarantined at their respective homes or hotel, rather than being taken to Quarantine Centres.

Your attention is drawn to the Regulations made by the Hon. Minister of Health published in Gazette Extraordinary No. 2197/25 dated October 15, 2020 which is applicable to COVID-19. In terms of Regulation 91 of the said Regulations:

(a) restrict the movement of persons;

(b) take or require any person to take a diseased person or a person suspected to be diseased to a hospital, place of observation or quarantine centre for treatment or quarantine purpose; or

(c) direct any person suspected to be a diseased to be self-quarantined in his house, premises or place of residence for a period not exceeding the incubation period as may be determined by the proper authority for the whole of Sri Lanka.

The aforesaid acts of forced detention in quarantine centres are arbitrary and unlawful are an affront to the judiciary who have released the said persons on bail.

Such arrests and forcible detentions have a negative effect on and undermine the genuine efforts being taken by the health authorities, the security forces and the police to combat COVID-19.

We therefore, request you as the Inspector General of Police to direct your officers to refrain from arresting and detaining persons who are exercising their peaceful right to protest.

As you are aware the BASL wrote to you on 10-06-2021 on the subject "Police Media Release on Circulation of Fake News, Photographs, Videos causing Disunity, Hate and Obstructing the COVID-19 Program", to which we have had no reply as yet.

The BASL is alarmed at the increasing threat posed to the rights of individuals by the Press Releases and Circulars issued by the Sri Lanka Police under the guise of controlling the spread of COVID-19.

We call upon you as the Director General of Health Services not to allow the Health Guidelines to be abused in a manner which has a chilling effect on the freedom to dissent and to ensure that Health Regulations and Guidelines are used only for the purpose they were promulgated for. I.e. to curb the spread of COVID-19."