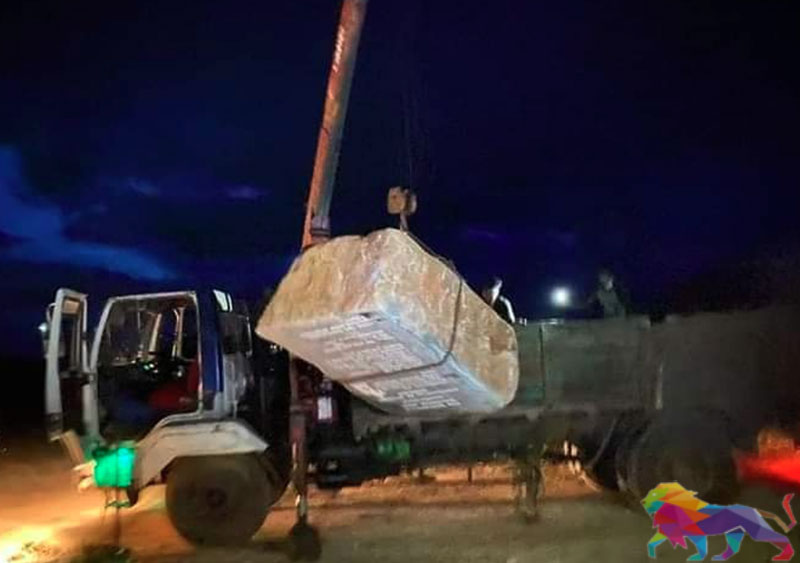 The Police and security forces in Northern Sri Lanka are accused of an ‘despicable act of stealing’ by Tamil lawmakers, priests and attorneys after a granite plaque which was about to be erected in memory of the Tamils who lost their lives during the final war was removed by the security forces.

As the annual ‘Mullivaikkal homage event’ was approaching, army was present in large numbers in and around the place. And, now with the huge army and police presence the granite plaque has gone missing and the 10 year old makeshift memorial demolished.

The huge granite plaque was brought to the Mullivaikkal memorial ground on Wednesday (12) evening carried by cranes. While arrangements were being made to offload the monument, arguments erupted between the catholic clergy and the Police and Army personnel who were deployed in the area.

A video showing the argument between the catholic clergy questioning the presence of the security personnel and their decision not to allow the offloading of the plaque from the vehicle went viral on social media.

The catholic clergy could be seen questioning the members of the armed forces in stopping the Tamils from remembering and paying homage to those who died during the war while celebrations hailing the army and the associated commemorations were allowed. 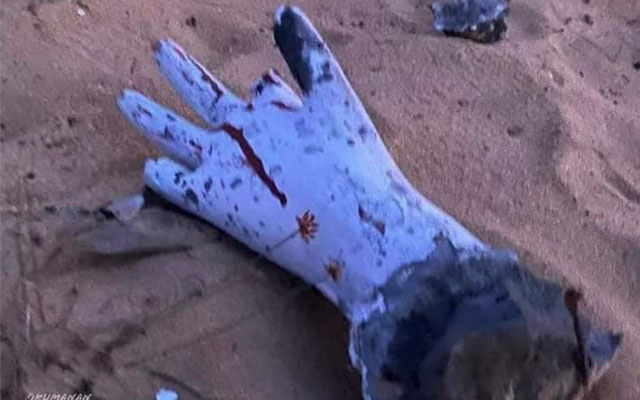 But overnight the huge granite plaque went missing and the makeshift ‘Mullivaikkal memorial’ was broken down and strewn in the sands where twelve years ago body parts were seen strewn around at the end of the bloody civil war which the government claimed as a ‘victory and liberating the land from terrorists.’

“Such a huge granite block gone missing from the watchful eyes of the Police and Army means it’s they who have stolen. And it’s nothing but clear act of theft by them. People who are supposed to protect have stolen,” attorney Sugash Kanagaratnam from Jaffna told local journalists.

Tamil lawmakers Selvam Adaikkalanathan and Selvaraja Kajenthiran who visited the place early in the morning today (13) have made a complaint to the police about the plaque gone missing.

The plaque was planned to be erected as part of the annual homage to those war dead Tamils by the families and friends on the 18th of May at a common place as a gesture of solidarity. The solemn and sombre event is marked by Tamils around the globe as their tributes those who lost their lives during the war. 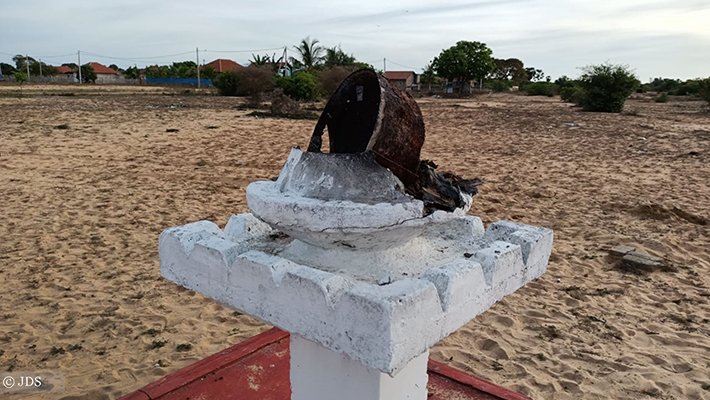 Recently in spite of Covid-19 restrictions, 29 monks were allowed to proceed to Kurunthurmalai - a traditional religious site of the Tamils - under the pretext of archaeological evidence of Buddhist remains and conducted a whole night prayer with the Army and police in attendance. Public and Tamil lawmakers question the partisan act of allowing monks and army to pray and worship while Tamils are being denied the same rights.

On the 8th January this year, a ‘Mullivaikkal memorial monument’ erected in 2019 inside the Jaffna University campus was demolished overnight causing a huge furore among the students and the Tamil community. Following this, the officials were forced to re-erect it still larger in size in the campus.

Since the end of the war, the annual event has been an eye-sore for the Sinhala governments which had tried its best to subvert and sabotage the event. However, passion and prayers overcame power every year. 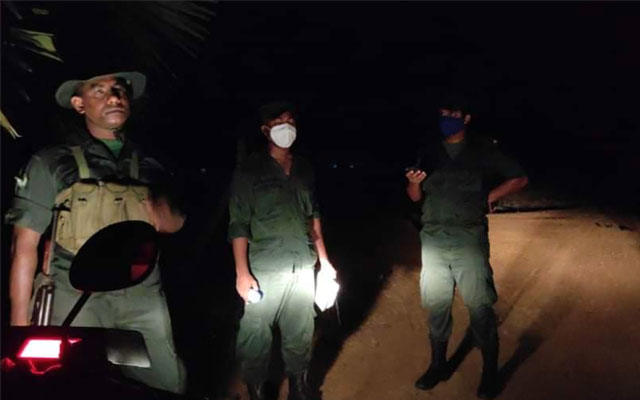 Even last year, in spite of warning by the military citing the same Covid-19 reasons, the event happened with people observing the Covid protocol. Arrangements for washing hands, sanitizing were provided as people gathered to pay homage following social distancing.

This year a common platform comprising of the catholic clergy, public and families of those who lost their kith and kin in the war had planned to erect a plaque at the place where thousands of Tamils were killed in the last phase of the war at Mullivaikkal.

Meanwhile In an unprecedented move, all the four catholic bishops in the North and East of Sri Lanka have called what happened during the final phase of the war at Mullivaikal as a ‘genocide’.

Issuing a joint statement the Bishops of Jaffna, Mannar, Batticalo and Trincomalee have called upon the people in those area to observe the 12th anniversary of the ‘Mullivaikal genocide’.

“May 18, 2021 marks, for the people in North and East of Sri Lanka, twelfth anniversary of Mullivaikal genocide. The survivors and witnesses of the last phase of war and the preceding decades, mourn over their departed, who without paying the last rights hurriedly buried their loved ones. The day dedicated prompts that the victims have the right to remembrance. Victims remain no more the passive sufferers rather active participants in the process of redress”.

The bishops say they have joined the Tamil people in seeking justice for the crimes perpetrated by the state and mark May 18 as a day of remembrance and prayer. They have also requested all the parish priests, religious communities and all those in charge of religious institutions to observe two minutes of silence and light a special oil lamp or candle to pay homage to the Tamils who lost their lives during the final war.