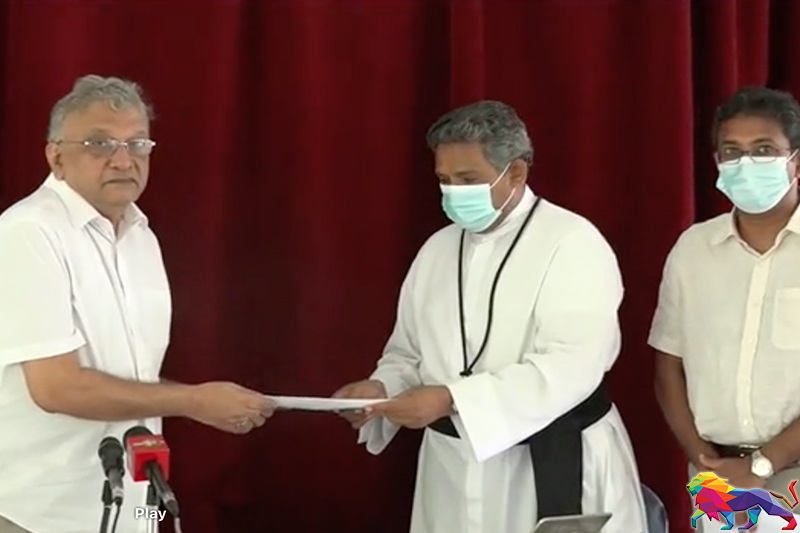 A letter containing controversial information revealed in Parliament recently by Samagi Jana Balawegaya (SJB) parliamentarians including Harin Fernando and Manusha Nanayakkara was handed over to the Catholic Bishops Conference of Sri Lanka today (26).

Although the meeting with the Catholic Bishops Conference was to be held at the CSR Institute in Maradana, the police had informed that such a meeting could not be allowed due to the prevailing Corona pandemic. As such, the meeting was held at a church in Colombo.

The letter signed by the Chief Opposition Whip Lakshman Kiriella stated that;


"The Easter Sunday attack that occurred two years ago terrorizing our Catholic Community as well as the entire citizenry of Sri Lanka still reverberates around the country while increasing concern that the truth behind this horror still remains shrouded in secrecy and withheld from the general public.

The Catholic community, the large number of dead and hundreds of injured and the public have the inalienable right to have this mystery solved and all facts laid bare for their consideration. The fact that those who shirked their responsibility to ensure that this attack never happened should be justly punished is equally obvious.

Further, identifying the manipulators and brains behind attack is the most critical need of the hour. The innocent Catholic devotees who were peacefully observing the holiest of holy days of Christianity when they were subject to this dastardly attack have the right to know who strategized, planned and executed the terror unleashed upon them.

Instead of exposing the truth, the government has taken the step to attempt to take revenge upon opposition members and activists who were clamoring for the truth.

The evidence and testimony of witnesses of the attack have consumed more than thirty seven thousand pages according to reports. The evidence of 457 witnesses is compiled in these 37,314 pages. Even though the report on the attack spread across 8 volumes only the first has been tabled in parliament. It is shown in that volume that the evidence of officers of the intelligence services nor their responses should be revealed to the public.

The evidence provided by the wife of the terrorist who after unsuccessfully attempting to detonate an explosive device at the Taj Samudra subsequently did so at the "Tropical Inn" in Dehiwala has proved to be problematic. That evidence has not been made public. However, those facts need to be revealed to the public.

While Sarah, the wife of the Negombo St. Sebastian Church bomber Mohammadu Hasthun has fled to India, it is critical that her evidence is recorded in this matter.

While the commission appointed for the purpose questioned why such an attack took place despite the then President, Prime Minister, IGP and senior police officers being warned on several occasions, the present Prime Minister as well as some present ministers have admitted that before 2015, during the time of the war, Zaharan Hasheem and the Thowheed Jamath has close relationships with the intelligence services of the country and were looked after and even given a salary.

What is clear therefore is that if they had supported such a group during their time, then those individuals also bear responsibility for not preventing such a terror attack from happening.

The opposition leadership call is to resolve this issue and clear up this mystery. This is on behalf of the right to know of every citizen of this country.
However, the response of the government is to punish those of the opposition who have contributed to the struggle to extract the truth. It is our firm belief that the aspiration of the Catholic clergy and leadership is to also have the chief perpetrators of this attack revealed and therefore we trust that the reverends will urgently intercede and speak on behalf of opposition leaders and activists who can continuously voiced their concerns both within parliament and outside of it.

We ask, reverends, that a few key opposition leaders are allowed the opportunity to present facts related to the attack and subsequent responses of the present government to the Catholic Bishop's Conference and humbly request a meeting at a time and place best suited to it," the letter said.