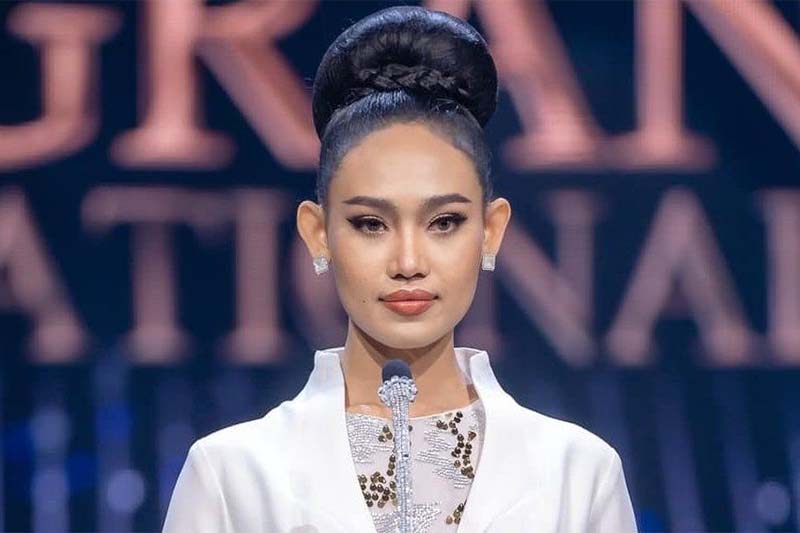 But when Han Lay, Miss Grand Myanmar, spoke out last week against alleged atrocities committed by her country's military, her speech turned heads.

"Today in my country Myanmar ... there are so many people dying," she said at the Miss Grand International 2020 event in Thailand. "Please help Myanmar. We need your urgent international help right now."

A little over a month ago, Han Lay, who is 22, was on the streets of Yangon, Myanmar's largest city, protesting against the military. 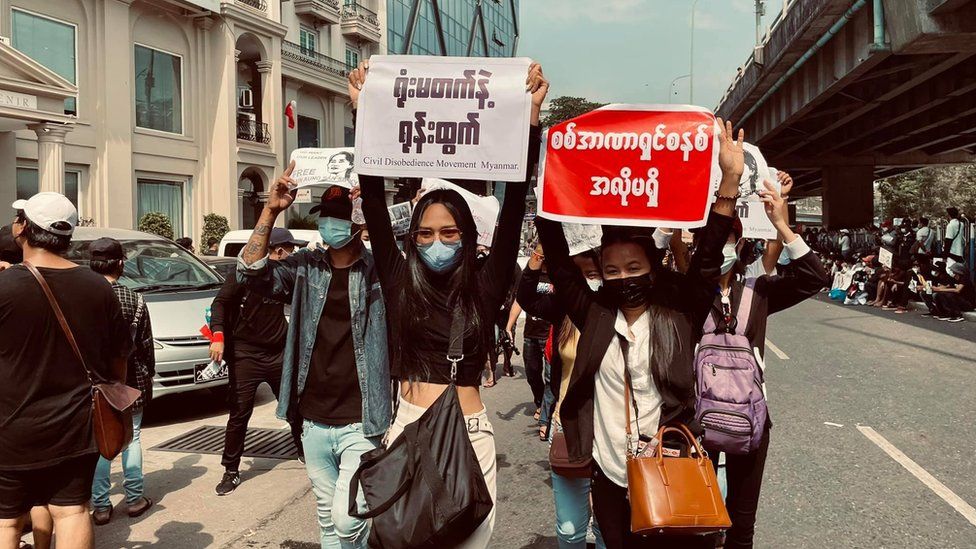 The unrest in Myanmar began two months ago when the military seized control of the country, undoing a democratic election in which Aung San Suu Kyi's National League for Democracy (NLD) party won by a landslide.

When tens of thousands of people took to the streets nationwide to protest the coup, the military used water cannons to disperse them. After a week, the response escalated to rubber bullets and then live ammunition.

The deadliest day of the conflict came last Saturday, when more than 100 people were killed. A local monitoring group puts the overall death toll at more than 500. According to Save the Children, 43 of those killed were children.

Han Lay, a psychology student at the University of Yangon, decided to use the pageant as a platform to speak out about her homeland on an international stage.

"In Myanmar, journalists are detained ... so I decided to speak out," she told the BBC in a phone interview from Bangkok.

She is concerned now that her two-minute speech could have put her on the radar of the military. She said she had decided to stay put in Thailand for at least the next three months. 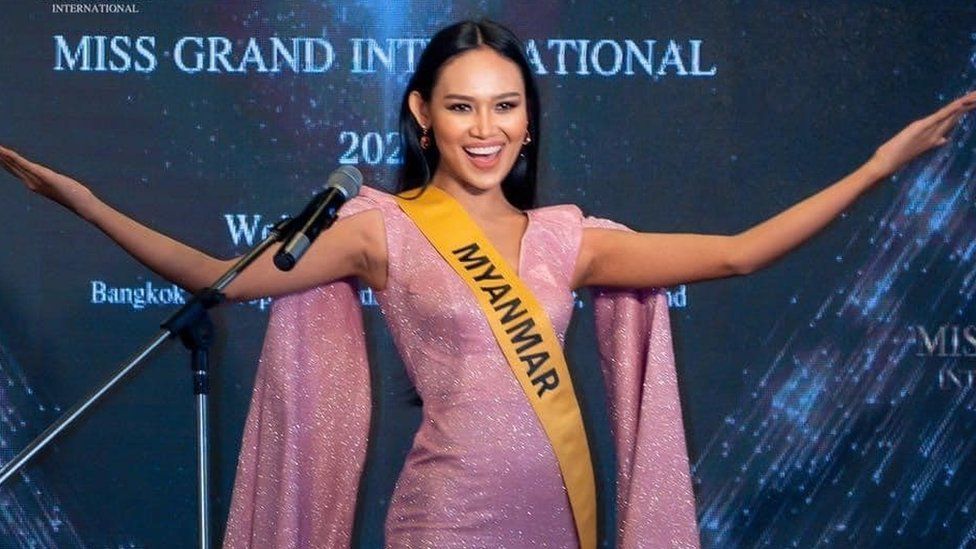 Han Lay has used her platform to condemn the Myanmar military

Han Lay said she knew before she left for Thailand that she would be potentially putting herself at risk and would need to stay there for a while.

"I am so worried about my family and my security because I spoke out a lot about the military and the situation in Myanmar. In Myanmar everyone knows there are limits on speaking out about what is happening," she said.

"My friends told me to not come back to Myanmar."

Her fears are not unfounded. Security forces issued arrest warrants last week for 18 celebrities, social media "influencers" and two journalists under a law against material "intended to cause a member of the armed forces to mutiny or disregard their duty", state media reported. All of them had spoken out against the coup. 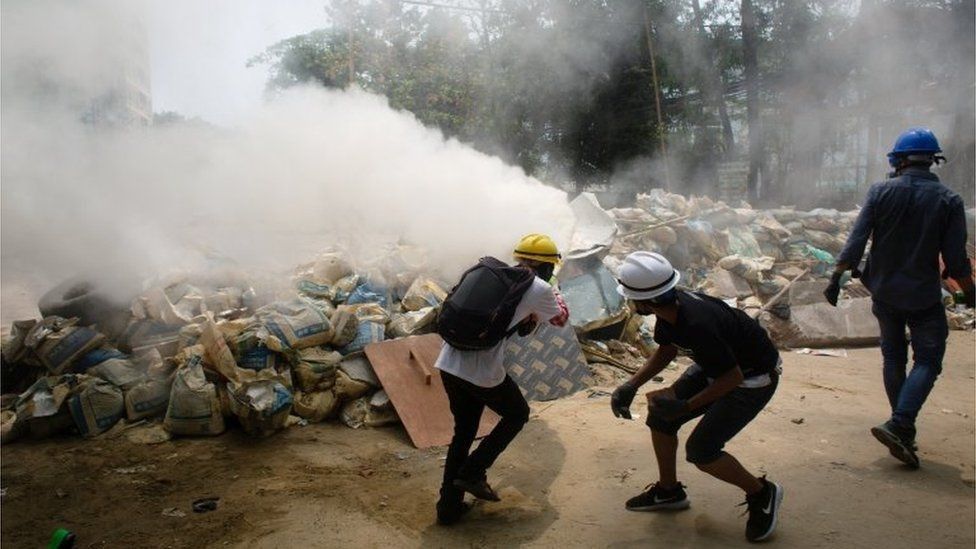 Han Lay said she had not been contacted by the military or any other officials after her speech, but she said she had been on the receiving end of threatening comments on her social media accounts.

"On social media they threatened me, saying when I go back to Myanmar ... prison is waiting for me," she said. She doesn't know who is behind the threatening remarks. The vast majority of social media comments had been supportive, she said. 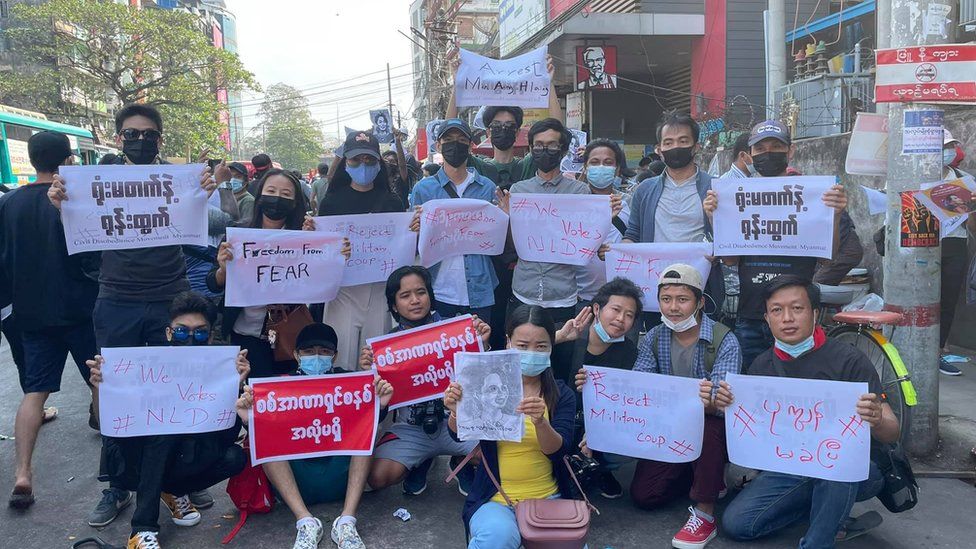 Han Lay, in blue mask and baseball cap, took to the streets with her fellow students

Many of Han Lay's fellow students who she protested with in the first weeks after the coup had been jailed, she said. According to the Assistance Association for Political Prisoners (AAPP) activist group, at least 2,500 people have been arrested in the military crackdown.

And one of her friends was killed, Han Lay said.

"He wasn't even protesting. He went to a restaurant to drink some coffee one evening and someone shot him," she said.

Han Lay's family are safe, she said, but communication with them is sporadic because the internet is being regularly cut in Myanmar. She asked that the BBC did not publish the name of her home town, to protect them.

Han Lay's public political remarks, including direct criticism of the Myanmar's military and calls in an interview with fans on the pageant's official channel to "win the revolution", are not common among pageant contestants, who often prefer to stay apolitical.

Speaking before the competition, Lyv Chili, Miss Grand Cambodia, called on fans to stay out of politics. 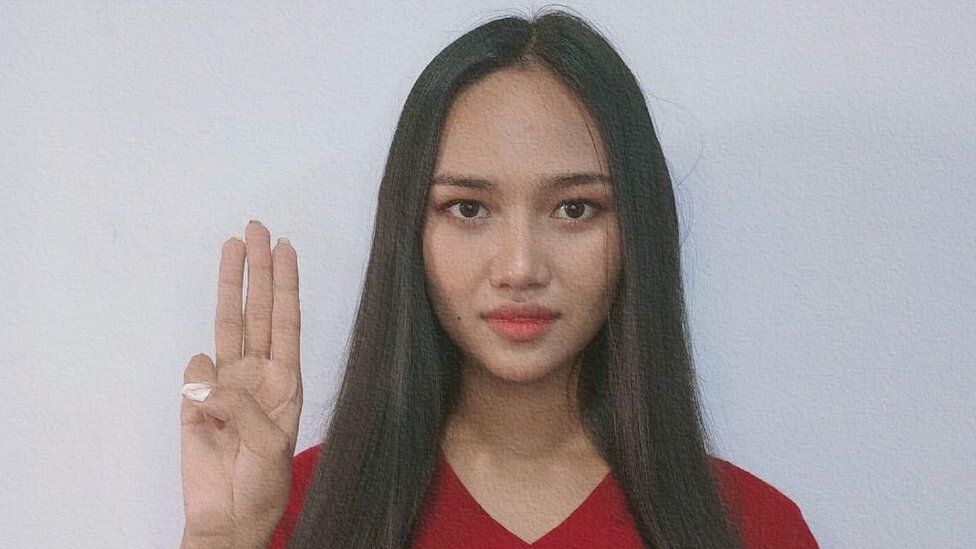 Han Lay makes the three finger salute, which has become a symbol of protest against Asia's military regimes

But Han Lay sees speaking out as her "duty", she said. She called Ms Suu Kyi her "greatest inspiration". The ousted democratic leader was charged last week with violating Myanmar's official secrets act, a charge which carries a prison term of up to 14 years.

Han Lay previously planned on training to be a flight attendant after graduating, but she said she was unsure now about which path to take. Some have tried to persuade her to enter politics, she said, but she doesn't think it's for her.

In the meantime, she plans to keep using her voice to speak out.

"These are crimes against humanity, that's why we want the UN to take action urgently," she said. "We want our leader back and we want real democracy back."