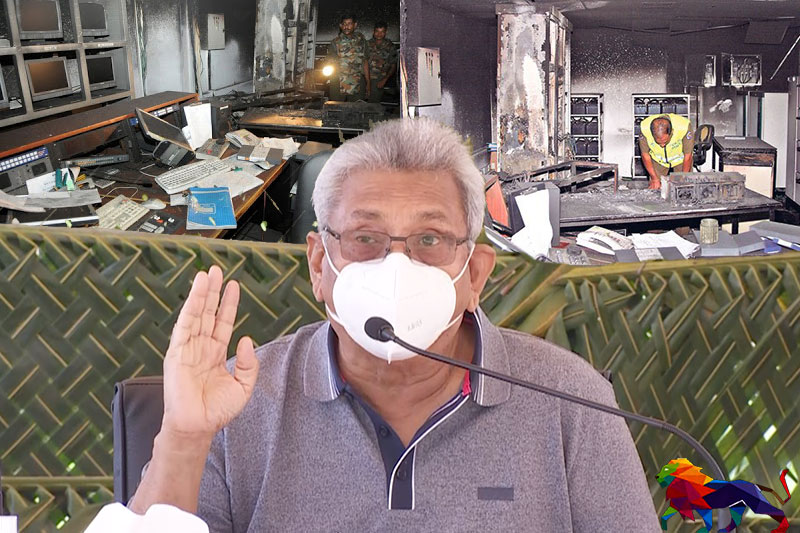 In an attempt to justify his veiled threat to media freedom after he announced that he will not allow those in the ‘media mafia’ to control the government, adding that he knows how to teach them a lesson if required, President Gotabaya Rajapaksa said that a media group that worked against the country during the war has reappeared and are attacking nationalist ideologies and programmes through their media institutions.

The President made these remarks participating in the “Discussion with the Village” programme held on Saturday (20) at the Yombuweltenna village in the Walapane Divisional Secretariat Division of the Nuwara Eliya District.

Although the President wasn't clear on which particular media institution he was referring to, it seems as if one of the intended targets was the Capital Maharaja organisation.

It was reported that the President had been irked by Sirasa Lakshapathi programme contestant Bhagya Abeyratne's revelation about the environmental destruction taking place at the Sinharaja forest and its surrounding area.

Noting that media freedom does not mean freedom of media owners, he observed that certain media owners want to run the country the way they want.

"There are neither kings nor maharajas in our country. The maharajas are from in India. The media mafia tries to control the government. I won't allow that to happen. I know how to teach them a lesson if required,” the President said.

President Rajapaksa also said that he has not exerted any influence on the media as the President, and he will not hesitate to take necessary legal action against such groups, if they attempt to push the country and the people backward, by abusing media freedom for the benefit of various groups and individuals.

During the programme, the President had introduced media freedom as a privilege given by him.

"During the 14 months of my tenure, I have ensured that there is media freedom by not interfering with any media institution. But if they misunderstand this and try to misuse this freedom, I have laws and ways in which this can be controlled," he warned.

The attack on a maharaja media station

At the request of the Maha Sangha, the President had earlier stated his inclination to assume the role of a 'stern' Gotabaya, the same role he played when he was the Secretary of Defence.

It was at that time when a Maharaja media station also came under attack which caused heavy damage.

A list was compiled by the Journalists for Democracy in Sri Lanka (JDS) which contained the names of 44 journalists and media workers that were killed during Gotabaya Rajapaksa's tenure as the Secretary of Defence.

A majority of media workers killed in Sri Lanka were Tamils employed in the North and East. Their families are still yearning for justice.