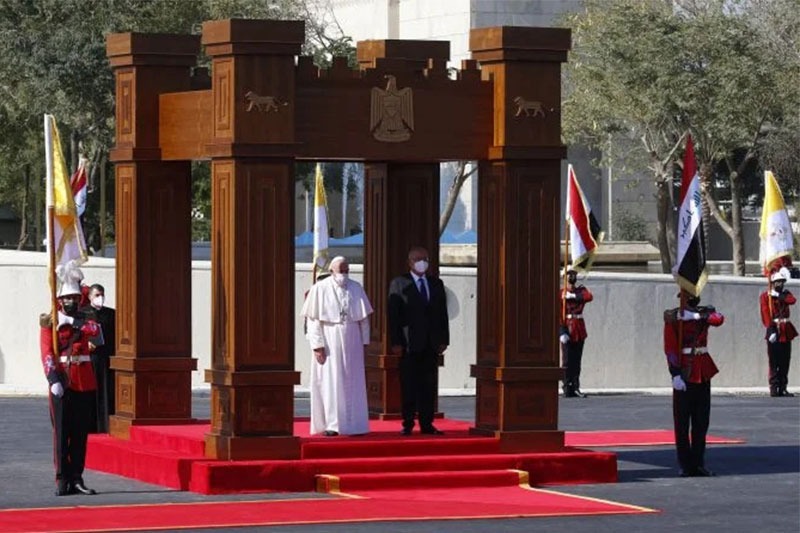 During his first remarks in Iraq, Pope Francis said that the name of God can never be used “to justify acts of murder, exile, terrorism and oppression,” and that minorities cannot be treated as second class citizens.

“Religion, by its very nature, must be at the service of peace and fraternity,” Francis said.

Speaking to civil authorities and diplomats, the pontiff noted than over the past several decades Iraq had been affected by the scourge of terrorism and sectarian violence grounded in a “fundamentalism” incapable of accepting the “peaceful coexistence of different ethnic and religious groups, different ideas and cultures.”
This violence brought in its wake death, destruction and ruin, and not only of material things, he argued.

“The damage is so much deeper if we think of the heartbreak endured by so many individuals and communities, and wounds that will take years to heal.”

The number of those killed since the 2003 U.S.-led invasion of Iraq is virtually impossible to calculate. In addition to the thousands killed during the war, there are those killed in the jihadi violence afterwards.

During ISIS’s 2013-2017 reign of terror, there were cases of Yazidi women put in cages, naked, and burned alive in the public square by ISIS for refusing to submit to sexual demands, and Christians crucified and beheaded for refusing to convert to Islam.

Today, though arguably less gruelling, the violence against minorities continues, perpetrated by militias, formed in many cases by former ISIS combatants, who are terrorizing civilians. In his remarks Francis noted that God created all human beings equal in dignity and rights.

“In Iraq too, the Catholic Church desires to be a friend to all and, through interreligious dialogue, to cooperate constructively with other religions in serving the cause of peace,” he said, making a case for the place of Christianity in Iraq, saying that the age-old presence of Christians in the land of Abraham, and the contributions they have made to the life of the nation, constitute a rich heritage that they want to continue to put at the service of all.

“Their participation in public life, as citizens with full rights, freedoms and responsibilities, will testify that a healthy pluralism of religious beliefs, ethnicities and cultures can contribute to the nation’s prosperity and harmony,” Francis said.

The Argentine pontiff, who will be in Iraq until Monday, highlighted that his apostolic visit is taking place as the world tries to emerge from the COVID-19 pandemic, which has affected not health, but also contributed to making social and economic conditions all the more fragile and unstable.

The coronavirus crisis, he said, requires “concerted efforts,” including in the equitable distribution of COVID-19 vaccines. Yet, Francis said, this by itself is not enough: “This crisis is above all a summons to ‘rethink our styles of life… and the meaning of our existence’,” he said, quoting his encyclical Fratelli Tutti.

Speaking about the suffering endured by many in Iraq, the pontiff singled out the Yazidis, “innocent victims of senseless and brutal atrocities, persecuted and killed for their religion, and whose very identity and survival was put at risk.”

In a span of a few hours in August 2014, some 5,000 Yazidi men were brutally murdered by ISIS and some 7,000 women and children kidnapped. To date, the whereabouts of close to 2,500 of them are still unknown.

More than half a million Yazidis were then forced to leave their homeland in the Sinjar region of Iraq.

The pope said the only way to begin an “effective process of rebuilding” and leave a better and more humane world to future generations is by looking beyond differences to instead see each other as members of the same human family.

“In this regard, the religious, cultural and ethnic diversity that has been a hallmark of Iraqi society for millennia is a precious resource on which to draw, not an obstacle to be eliminated,” Francis said. “Iraq today is called to show everyone, especially in the Middle East, that diversity, instead of giving rise to conflict, should lead to harmonious cooperation in the life of society.”

He applauded the efforts being made by authorities to grant all religious communities recognition, with their rights respected and lives protected.

Speaking about a society’s need to bear the imprint of fraternal unity to live in solidarity, the pontiff remembered all those who have lost family members and loved ones, as well as their homes or livelihood “due to violence, persecution or terrorism. I think too of those who continue to struggle for security and the means of personal and economic survival at a time of growing unemployment and poverty.”

The fact that “we are responsible for the fragility of others,” Francis said, should be a inspiration to create opportunities of progress, not only economically but also in terms of education and care for the environment.

“Following a crisis, it is not enough simply to rebuild; we need to rebuild well, so that all can enjoy a dignified life,” he said, insisting “we never emerge from a crisis the same as we were; we emerge from it either better or worse.”

In a country that has seen thousands protest against endemic corruption in recent days, Francis told politicians and diplomats that it’s not enough to simply combat the “scourge of corruption, misuse of power and disregard for law” – it is also necessary also to promote justice and foster honesty, transparency and a strengthening of institutions.

The pontiff also noted that through the years, many have prayed constantly for Iraq, including St. John Paul II, who “spared no initiatives and above all offered his prayers and sufferings” for peace in this country.

God, he said, “always listens,” but it’s up to humanity to listen to him and walk his path.

“May the clash of arms be silenced!” Francis urged. “May their spread be curbed, here and everywhere! May partisan interests cease, those outside interests uninterested in the local population. May the voice of builders and peacemakers find a hearing! The voice of the humble, the poor, the ordinary men and women who want to live, work and pray in peace.”

“May there be an end to acts of violence and extremism, factions and intolerance!” Francis said, noting that the international community also has a role to play in promoting peace both in Iraq and in the Middle East as a whole.

“As we have seen during the lengthy conflict in neighbouring Syria – which began ten years ago these very days! – the challenges facing our world today engage the entire human family,” he said.

After addressing civil authorities, Francis was set to encounter the religious community of Iraq before calling it a day. On Saturday, he’ll have two encounters aimed at fostering religious dialogue, and on Sunday, visit Kurdistan and the Nineveh Plain.

In his remarks, Iraq President Barham Salih said the people of the country “are proud of having protected churches from terrorist attacks,” and noted that “Muslim soldiers carried crosses on their shoulders to liberate Christian churches” after the ISIS occupation.

The president said that if Christians disappear from Middle East, it will have “disastrous consequences. The Middle East is unimaginable without its Christians.”

Salih called on an interreligious dialogue initiative involving the Vatican, the Shia Islam heartland of Najaf, and the Sunni Al-Azhar University in Egypt, as well as other religious groups.

“Iraq deserves better,” the president said: It deserves a “future of collaboration.”