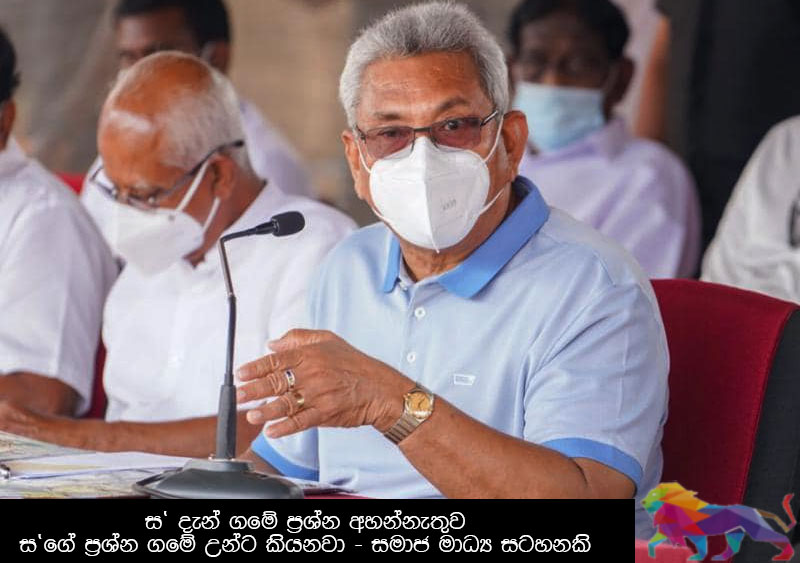 President Gotabaya Rajapaksa has rejected the allegations levelled by politicians of the former good governance government regarding the Easter Sunday terrorist attacks.

Citing the report of the Presidential Commission of Inquiry on the Easter Sunday attacks, President Rajapaksa blamed the previous government for being incapable of preventing the suicide bombings.

The President expressed these views while participating in the ‘Gama Samaga Pilisandara’ programme held yesterday (06) at the Maduragama Sports Grounds in Giribawa, Kurunegala.

Responding to accusations that he has failed in his presidency, he said that: “Some say that I have failed. I haven't failed. For 20 years, I worked for this country. Managed to end the war as the Defence Secretary. That should suffice for a honours degree. I am getting bonus marks for the presidency. It's been a long time since I have passed.”

No deals to protect anyone

Speaking to villagers, the President reiterated that his government has no need whatsoever to hide the findings of the Presidential Commission of Inquiry to investigate the Easter Sunday attack.

The President said that he would not make a deal with any individual or party, adding that he had no need to please anyone.

He noted that the Easter attack was a national issue and should not be transformed into a political issue.

"The Easter Sunday attack is a national issue. It should not be taken as a political theme. It is the responsibility of the government to act appropriately on behalf of the people affected by the tragedy,” the President remarked.

Addressing the concerns of Cardinal Malcolm Ranjith over the slow process of justice to the victims of the Easter attack and the general public, the President said the Cardinal’s pain about the attack is reasonable and that the Archbishop of Colombo has a right to talk about it.

"However, it is egregious that the politicians of the previous government who were silent at the time of the attack are now raising black flags," he pointed out.

"The Easter attack took place in 2019 when the former government was in power. The people were already disappointed by the policies of the then government and showed their strong opposition to them through cooperative elections and the local government elections in February 2018,” the President said, adding that the incumbent government's triumphant journey began well before the Easter Sunday attacks.
Easter attacks weren't showcased to get power

The President stressed that he did not come to power by showcasing the Easter Sunday attack.

He said that the government that was in office prior to 2015 had given top priority to national security.

"Those who came to power in 2015 forgot about national security. Despite all the human rights allegations, the pre-2015 defense policy has been reactivated,” the President said.

No room for Tamil or Muslim extremism

President Gotabaya Rajapaksa further said that he would not allow Tamil or Islamist extremism to raise its head under his rule.