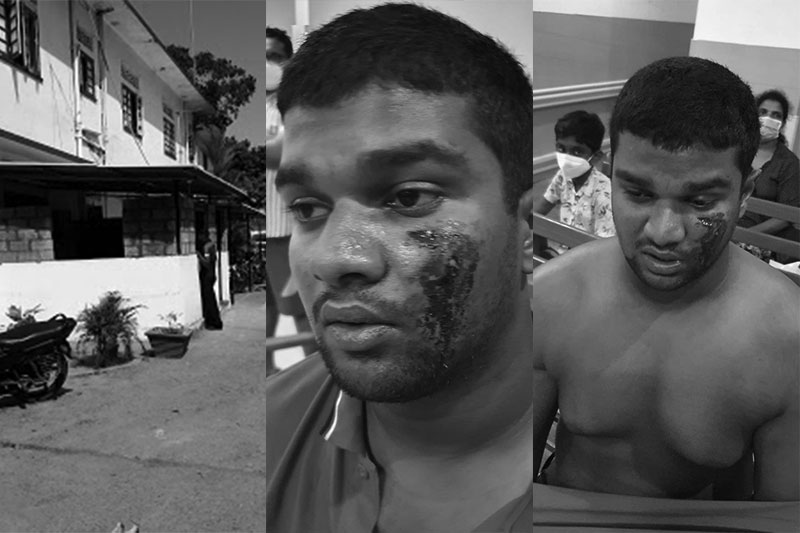 Around 10 police officers of the Peliyagoda police station including the Officer in Charge, Linton Silva, have brutally assaulted a final year law student.

The assault took place inside the police station as well on a vehicle belonging to the Peliyagoda police.

The law student, Migara Gunaratne, had been assaulted mercilessly when he went to hand over dinner to a client of his senior counsel.

On Februray 23, Attorney-at-law Charitha Gunaratne, the brother of law student Migara Gunaratne, was instructed by his senior counsel to go to the Peliyagoda police station to represent a long standing client of his who was being held in custody in connection to some financial issues.

At the police station, he was informed that his client was being held in the Special Crimes Unit (SIU), and once he made his way to the S.I.U, he had witnessed his client being intimidated by a person in casual attire.

Attorney-at-Law Charitha Gunaratne had immediately stepped in and informed a person, who he believed to be a police officer, that he was his client and was there to represent his interests as an attorney and held out his Bar Association of Sri Lanka (BASL) identification card to verify his credentials.

The officer in civilian clothing had simply stepped aside without verifying Chaitha's credentials. Attorney-at-law Charitha Gunaratne said that he was duly informed by his client that he has been assaulted by police officers multiple times in their custody and that they have threatened to pin unrelated drug charges on him and ensure that he will be imprisoned if he does not heed to the demands of the police.

Charitha Gunaratne had stepped out to make a phone call and when he had returned, he had overheard the person who was clad in casual attire threaten his client by stating that he is surrounded by people who have been taken into custody for drug related offenses and it is quite easy for them to pin similar charges on him.

"Since I couldn't designate what rank this officer held due to his casual attire, I addressed him as Sergeant whereas he started addressing me in choice Sinhala curse words and moved towards me.

The Chief Inspector of the Police by the name of Linton Silva joined to intimidate me and demanded I prove my credentials. Once I gave him my B.A.S.L I.D card, he wrote it down in his Notebook," Attorney-at-Law Charitha Gunaratne said.

He had simply stated to the Inspector that he had no choice but to address the officer as Sergeant because he was a person clad in casual attire whilst carrying out duties.

"Then, the Inspector accused me of being a drunk. Having not only to protect my dignity but that of my noble profession, I challenged the officers to immediately submit me to a breathalyzer test to verify if I am drunk. When I asked for the name of the officer, he threatened me and told me to leave," Attorney-at-Law Charitha Gunaratne said.

Speaking further on the incident, he said that:

"I held my ground until my client pleaded with me to leave as he will have to face the wrath of the police if this situation escalates. Having left, I immediately took action to inform the Bar Association of Sri Lanka and the relevant Police Departments of this unprofessional and gang-like behavior of the Peliyagoda Police.

Since my client was of the opinion that my presence would be detrimental to his safety and health inside Police Custody, I asked my brother, Migara (a law student) to drop off some dinner for my client on the 25th of February," he said.

When Migara Gunaratne had visited the police station to drop the dinner off, he had been brutally assaulted by at least ten police officers. It is assumed the police officers had mistaken his identity and had carried out this heinous attack under the assumption that it was his brother, Attorney-at-Law Charitha Gunaratne. 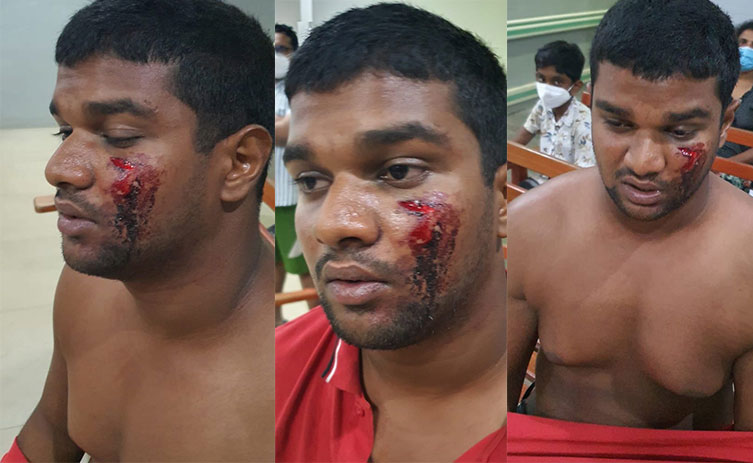 Furthermore, they have only stopped assaulting Migara Gunaratne after he had mentioned that he was the son of former Governor Maithri Gunaratne (PC).

Subsequently, one SI had instructed the others to charge him for obstruction of police duties because they knew that a problem may occur. They have further threatened to even make him a suspect in a drug related offence.

"What is shocking is the police assaulted my brother Migara thinking it was me," Attorney-at-Law Charitha Gunaratne said.

He further pointed out that the legal profession has been the last bastion to protect the general public from the excesses of police.

"If the police have begun to actively target Attorneys who question their brutal tactics, what can the public expect? Today it may be my brother, tomorrow it will be you," he added.
Newly elected BASL President condemns attack
President's Counsel Saliya Pieris, who was elected as the 26th President of the Bar Association of Sri Lanka (BASL) recently, said the news of a young final year law student Migara Gunaratne being subject to police brutality at Peliyagoda is appalling.

There should be zero tolerance of police brutality. The perpetrators must be swiftly dealt with and prosecuted," he said. 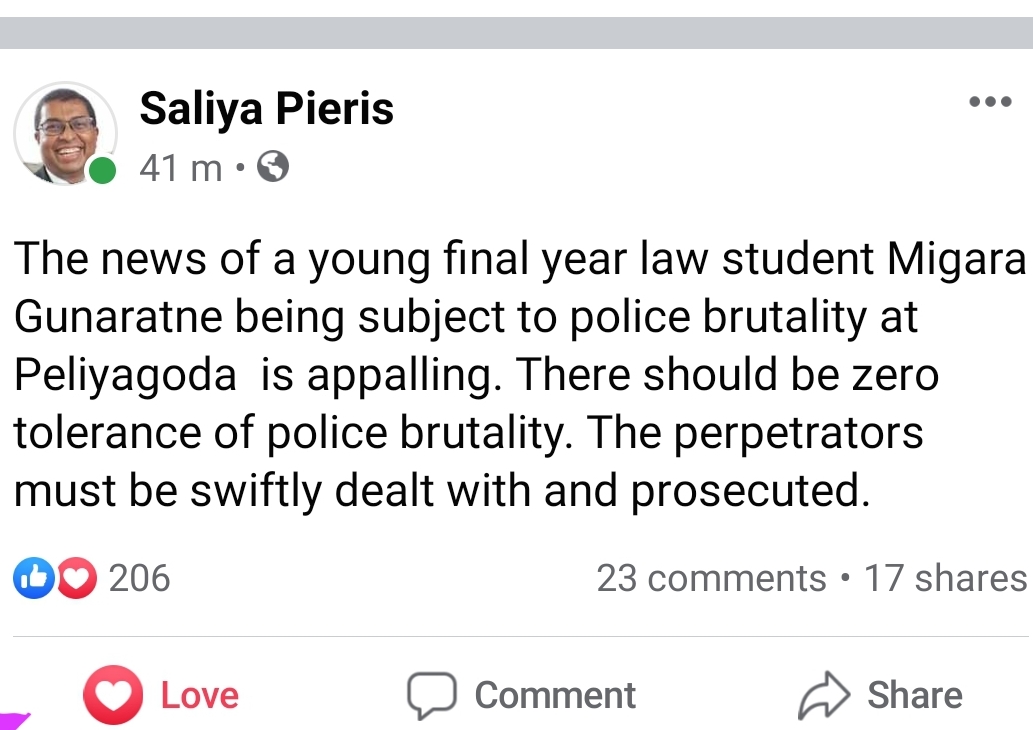