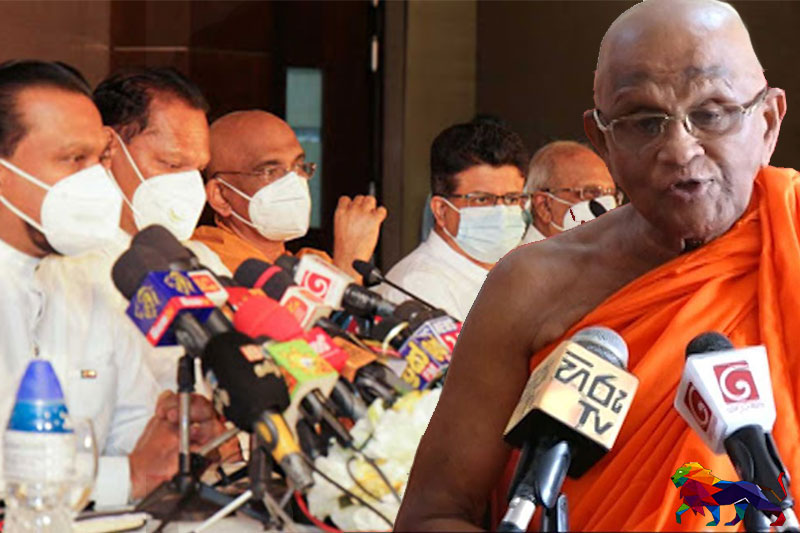 The Maha Sangha reiterated this stance at a meeting held with a group of party leaders led by Industries Minister Wimal Weerawansa. The party leaders were summoned for a meeting at the Abhayarama Temple yesterday (24).

Speaking to reporters after the meeting, Energy Minister Udaya Gammanpila said that political analysts have revealed how certain external elements have created challenges pertaining to the internal affairs of the government.

He said that the President should be supported at all times to ensure that the government can face these challenges head on.

"Leaders of 8 parties convened at the Abhayarama Temple under the patronage of Venerable Muruththettuwe Ananda Thero together with a group of Nayaka Theros. They discussed the challenges the current government is facing. It was an open dialogue where we discussed our future course of action. These are internal matters," he said.

Minister Wimal Weerawansa said that the Maha Sangha had pointed out the importance of politically empowering the President as the Head of State.

Minister Vasudeva Nanayakkara speaking to reporters after the meeting said: "the Chief Incumbent of the Abhayarama Temple Venerable Muruththettuwe Ananda Thero sent me a message asking me to come to the temple in the evening. I didn't ask why. After we arrived, he inquired about the current state of affairs of the government. It was just a query."