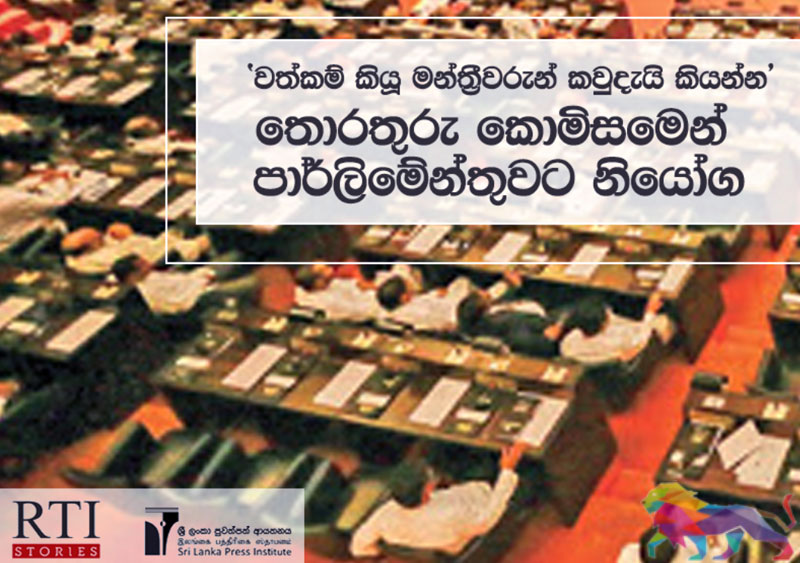 After hearing an appeal by two journalists, Sri Lanka RTI Commission has ordered the relevant authorities to release the list of names of MPs who have submitted their Declarations of Assets and Liabilities.

The request for the list of names was first filed on 21.06.2018 by two Sri Lanka journalists ChamaraSampath and Tharindu Jayawardene.

Tikiri K Jayathilake, Assistant Secretary General, and  K D S W Wijegunawardena, Deputy Principal Officer were named as the responsible authorities in the case.  They argued that in order to obtain details in relation to Declarations of Assets and Liabilities of Members of Parliament, a request has to be made to the Speaker of Parliament in terms of the Declaration of Assets and Liabilities Law No 01 of 1975.

Dissatisfied with the response, two journalists preferred an appeal to the Commission on 11.09.2018.

After hearing the case, the RTI Commission rejected the decision of the designated officer of the parliament in this appeal and the information requested by the appellant was directed to be released.

In its determination, the RTI commission says that “it is manifest that the information requested is of high public importance and public interest given the need for accountability and transparency of elected representatives. The submission of Declarations of Assets and Liabilities by parliamentarians to the Speaker of the Parliament is a legal duty specially secured by the Declarations of Assets and Liabilities Law (1975). As such, this information request relates to the carrying out of a legal duty by elected representatives. We record our considerable puzzlement as to why such a high degree of secrecy needs to be maintained about this data.”

The RTI commission further noted that the considerable period of time taken in issuing this ruling was owing to a decision taken upon the consensus of parties in the hearing of the Appeal, that time may be taken to allow an appeal being heard by the Court of Appeal upon the Office of the President contesting an earlier decision of this Commission ordering release of the Declaration of Assets and Liabilities of the Prime Minister (CA/RTI/01/2019) to be concluded.

However, as close to two years and three months have lapsed since the Appellant lodged this Appeal to the Commission, this Order is issued hereto.