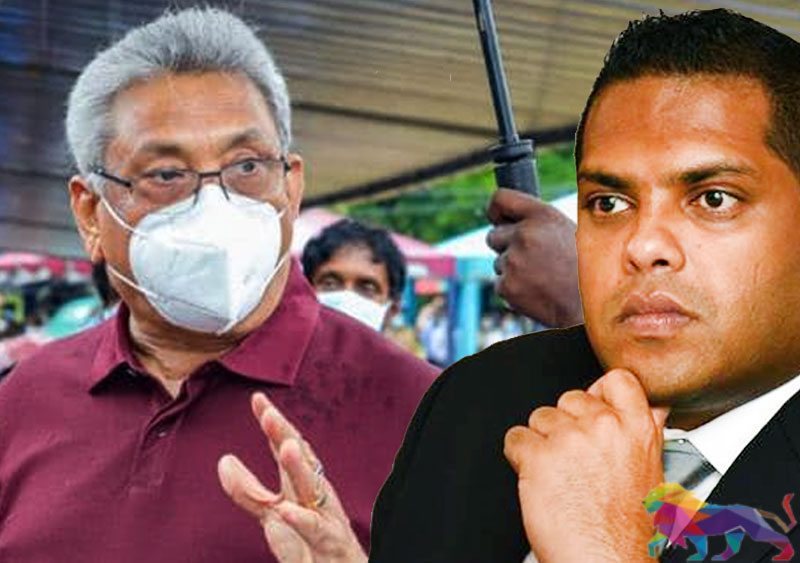 Samagi Jana Balawegaya (SJB) parliamentarian Harin Fernando has sought the intervention of the Inspector General of Police (IGP) to protect his life which has been placed under serious threat after President Gotabaya Rajapaksa's remarks at a function held in Ampara yesterday (09).

The opposition lawmaker highlighted the fact that protecting the life and liberty of Members of Parliament discharging their duties is not a personal favour he is asking of the IGP, but an exercise of his solemn duty to defend the Constitution of the Republic, which he is sworn to do.
"As a career police officer, I trust that you do not want to be remembered as the IGP who oversaw the first assassination of a Sri Lankan Parliamentarian since the end of the civil war," Fernando said.
Full text of the letter sent by SJB MP Harin Fernando is found below.

Yesterday, I saw video footage of President Nandasena Gotabaya Rajapaksa delivering remarks at an event in Uhuna, Ampara. In his remarks, the President refers to me by name and addresses speeches made by me in Parliament in which I referred to his first name, Nandasena. The President stated that he has a peaceful side and a dark side, and that he is perfectly capable of returning to his dark roots from his tenure as Secretary of Defence.

As you can see from the annexed video clip and transcript, the President fails to differentiate between a seditious, genocidal terrorist tyrant and a legislator exercising his fundamental right to freedom of speech in Parliament. He must be reminded that I have never engaged with terrorists. I have never bribed terrorists to prevent the Tamil people from voting. I have not embraced Karuna Amman, who has butchered more police officers than any man who ever lived. Above all, I am, and have always been, a citizen of Sri Lanka and no other country.

The President clearly insinuates that he is capable of having me “killed like a dog” if I continue saying things that displease him. So long as he continues to fail in his duties, I must do my own duty by continuing to say things that displease him, whatever the risk to my life. Therefore, I must bring this matter to your urgent attention. Given the serious nature of the threat made by President Nandasena Gotabaya Rajapaksa, who is also Commander-in-Chief of the security forces and Minister of Defence, I have no reason to doubt him when he implies that he is capable of doing me harm.

But I am stunned that the President is so agitated simply because I mentioned his first name. Presidents have long been called by their names or initials. No one has been threatened with death for using the names “JRJ”, “Premadasa”, “DB”, “Chandrika”, “Mahinda” or “Sirisena”. Unless the President proves otherwise, I find it difficult to believe that members of the Buddhist clergy have truly advised him to resort to violence. My understanding as a Catholic is that Buddhism shuns violence and espouses peace.

I am painfully aware that many journalists, activists and Members of Parliament who criticized the President when he was Defence Secretary have since either disappeared or been assassinated. In many of these cases, the attacks were preceded by implied threats or frivolous litigation initiated by politicians and officials including Nandasena Gotabaya Rajapaksa. Indeed, it is ironic that the President turned his guns on me exactly 12 years after Lasantha Wickrematunge, one such man who fearlessly expressed his thoughts and opinions, was assassinated.

I ask that you kindly arrange without delay, to provide me with adequate security against this grave threat to my life and to my duty to speak freely on behalf of the 2.8 million voters who supported the Samagi Jana Balawegaya. It is my fundamental right to say what I wish without fear of being summarily executed like a terrorist.

Mr. Wickremaratne, I must remind you that you are the Inspector-General of Police for the Republic of Sri Lanka, not the personal servant of Nandasena Gotabaya Rajapaksa. Protecting the life and liberty of Members of Parliament discharging their duties is not a personal favour I am asking of you, but an exercise of your solemn duty to defend the Constitution of the Republic, which you are sworn to do. As a career police officer, I trust that you do not want to be remembered as the IGP who oversaw the first assassination of a Sri Lankan Parliamentarian since the end of the civil war.

For the record, this is the first time I have ever received a credible death threat. I am used to democratic politics, where politicians engage each other and debate their ideas and opinions. This is my first experience of a political opponent trying to terrorize me into silence using fear and the threat of violence. Since I refuse to be silenced, if I am killed, I must assume it will be at the behest of the only man who has ever threatened to kill me.

In the hope that it will result in additional pressure on Nandasena Gotabaya Rajapaksa to desist from the criminal course of action he appears to be contemplating, I am copying this letter to the Speaker of Parliament, the Attorney General, heads of foreign missions in Colombo and the United Nations Special Rapporteurs on Freedom of Opinion and Expression, and on Extrajudicial, Summary or Arbitrary Executions.