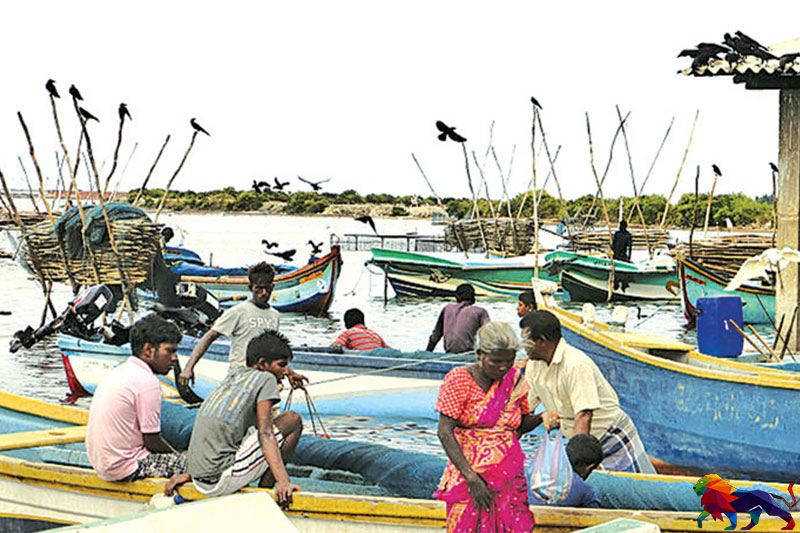 Amidst apparent lack of will and indifference by Sri Lankan and Indian governments in resolving the decades old fishing dispute in the narrow stretch of sea between the two nations, fisher community leaders have now said they can find a solution through mutual dialogue.

The area around the Palk strait is a source of livelihood for thousands of fishermen from the Southern tip of India to the Northern areas of Sri Lanka. As stocks of fish deplete due to overfishing encroachments from Indian fishermen into Sri Lankan territorial waters became a norm.

The fishermen along with their boats were being regularly seized by the Sri Lankan government and have been an irksome feature between both countries causing considerable diplomatic strain. As constant government to government talks have not yielded any tangible results, the fishermen from both sides have come forward to have direct talks between them to discuss and sort out long pending issues.

Fishermen from Tamil Nadu extending over a 200KM belt between Rameswaram and Pudukottai have suggested to their Sri Lankan counterparts the fishing days between them could be shared 5:2 days among them in the area.

Rameswaram fishermen association leader B. Jesuraja told this writer they are fully aware of the plight of the Sri Lankan fishermen from the Northern Province who have suffered immensely during the war and other natural disasters and would not spoil their livelihood.

“We suggest the Sri Lankan fishermen could fish in the Palk straits five days a week leaving the balance two days for us. The aquatic resources in and around the Katchatheevu is high compared to the area within the Indian boundary and in such a narrow stretch of sea, crossing Katchativu and entering Sri Lankan territorial waters , where we have been fishing for over a century is unavoidable and we consider it our traditional area”

The small islet of Katchativu was ceded to Sri Lanka by former Indian PM Indira Gandhi under the “Indo Sri Lankan Maritime agreement” in 1974. Two years later another agreement between the two nations restricted the fishermen from both countries from fishing in each others ‘exclusive economic zones’.

The brutal civil war deprived the livelihood of the Lankan fishermen with severe restrictions on them by the Navy in venturing into the sea for fishing. Sri Lankan fishermen claim their Indian counterparts took advantage of the war and established their presence in the Palk Strait area. The excessive fishing in the disputed area using trawler nets has led to depletion of fishing stock and this has jeopardised the lives of the SL fishermen who were trying to rebuild their lives after the war In spite of their difficult economic status.

Tamil fishermen from the Mannar to Mullaitivu northeastern coastal belt allege their livelihood has been totally lost due to the poaching by the Indian fishermen. The Sri Lankan government regularly arrest Indian fishermen and confiscate their boats only to be released subsequently owing to diplomatic pressure.

Mariyadas Patrick Johnson, president of the fishermen cooperative of the Mullaitivu district, who led the protest has welcomed the suggestion of the Indian fishermen and says they are open to discussing with them to sort out the decade’s long issue.

“One of the Tamil Nadu fishermen association leaders has said instead of the government talking to each other, fishermen association representatives from both sides meet, discuss and come to a conclusion that would be better. In that respect, I welcome his suggestion. We fishermen have been affected by war and Tsunami. If the fishermen and their associations from both sides discuss directly, I believe the other side would understand our difficulties and misery clearly,” Johnson told Sri Lankan journalist Shanmugam Thavaseelan.

Talks between India and Sri Lanka officials are likely to be held on the 30th December and the SL fishermen hope their government will get them an acceptable solution. Indian fishermen however say they have not been informed or invited for the said meeting.

According to TN fishermen they venture into the sea only for a maximum of 80-90 days in a year including the regular fishing ban period imposed by the government. The arrangement they say would sustain the livelihood of both sides and also increase the fishing stock in the area.

“While we understand the conditions of the SL fishermen our lives are no better,” says Jesudas.

“We have urged our government to help us in deep sea fishing by providing necessary financial support, training and marketing opportunities, so that we could avoid going to the Palk Strait area. That would be the long term and lasting solution till such time we need to share the sea with our Sri Lankan brethren. Also, at present we don’t have any problem with the Sinhala fishermen as they mostly venture into deep sea fishing suitably assisted by their government”

The 5:2 system a week would replenish stocks in and around the Katchatheevu area and would regenerate aquatic resources which over a few years would increase considerably, says Jesuraja.

While people like Johnson on the Lankan side feel confident about their government efforts, they concur mutual talks would lead to quick and long-lasting solution.

"I am not saying that the government won’t get us a solution. However apart from accepting their proposal, I believe that discussion between the fishermen of both sides would lead to an easy solution."

As election fever begins in Tamil Nadu, a solution to the fishermen issue would be a propaganda tool. And, it is up to the political parties to act prudently and facilitate direct talks between the fishermen from both sides with the governments acting as a guarantor if at all a solution is found.
(JDS)