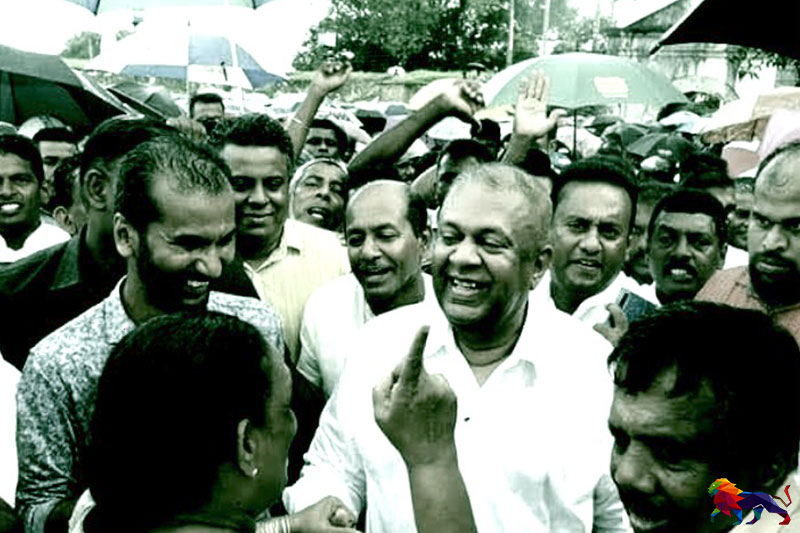 The decision reached by Mangala Samaraweera who is considered a colourful, controversial, daring and creative political figure in the old or the traditional political landscape of

Sri Lanka which is currently on the verge of decay and death, to abandon the course of traditional politics and choose an alternative path can be seen as a silver lining in the pitch darkness. Despite being in a difficult situation in which I have had a narrow escape from a serious heart attack at the moment, I felt it was my duty to express my sincere sentiments  on Mangala's change and the new path he has chosen,  at least in the form of  a brief  note.

He had several rounds of discussions with me before he chose this new path. He was aware that I was an activist of Punarudaya movement, an exclusive social movement when he had discussions with me. We both had long standing acquaintances, and there were occasions when we had even entered into heated arguments in public debates on various issues of public importance. For a long time we did not associate each other closely. It can be said to have resumed only during the latter part of the regime of the previous government.

Mangala invited me to deliver the keynote address at the launching of his biography. He gave me the freedom to choose the topic of the address. I talked about the Sri Lankan crisis. I pointed out that Sri Lanka remained a flourishing country among the Asian countries when it gained independence and how it had been brought down to the present unfortunate plight by successive ruling parties that assumed power since then. My analysis, no doubt, would have been a rigorous criticism against the two main political parties that ruled the country since independence.

I stated that the political parties of Sri Lanka do not have a realistic solution to the crisis in Sri Lanka and in that context the total collapse of socio -political system and the economy of the country is inevitable. The speech I delivered at this function which was attended by a large number of UNP leaders and the supporters of Mangala in the Matara district, cannot be said to be one that would have been a source of strength for the Presidential election campaign of the party. However, my speech did not anger Mangala. Delivering the vote of thanks, Mangala admitted that not only the two main political parties that ruled the country alternately, but also he himself is responsible for the plight of the country for which he expressed his regret.

Following the defeat of the presidential election and the handing over of nominations for parliamentary elections, he convened a meeting of a small group of selected people to further discuss the crisis Sri Lanka is facing. There the issue was discussed in detail. There were two prominent economic experts among those who were present at this discussion. Two Central Committee members of the Punarudaya Movement also participated in two rounds of discussions held in this regard with me. All participants shared the view that the crisis in Sri Lanka had gone too far and is beyond the control with eventual collapse of the socio-political system and the economy of the country which is inevitable.

The next discussion was on what we, and especially Mangala, could and should do to save the country from this unfortunate situation. Everyone agreed that we should launch a strong public movement with an advanced vision and capable of achieving the structural reforms needed for building the country. The role of Mangala in this connection was also discussed. I was strongly of the view that Mangala should withdraw himself from the hackneyed old path of politics and even from contesting the Parliamentary election, and rigorously contribute to the new journey he has set upon. Some of the participants were of the view that he could pursue on the new path without leaving the course of old politics altogether. But, Mangala was not in agreement. His firm conviction was that he should move away from the old culture of politics which is extremely rotten and commit himself to the cause of building a new mass political movement aimed at saving the country. Everyone who attended the discussion reached the consensus that they possess the ability to stand up for the cause of the new movement with self confidence as the object of it is free of parochial and conspiratorial schemes aimed at seizing the power.
Sri Lanka, as a country, is now at a critical political juncture. The old-fashioned political parties which are corrupt do not have realistic ability to offer   a lasting solution to this crisis.

The extensive crisis Sri Lanka is currently facing can be overcome constructively, only by a true public movement which has a secular, pluralistic and democratic vision and is committed to build the Sri Lankan nation disregarding the recognition accorded to parochial and discriminatory divisions based on ethnicity, castes, and religions, and dedicated to bequeath equal rights and human dignity for all those who treat Sri Lanka their motherland, and introduce structural reformations aimed at abolishing corruption, inefficiency and bureaucracy which have overwhelmed the Sri Lanka State and its institutional system, and recreating the new Sri Lanka State where the rule of law prevails supreme. Mangala has joined such a political program of historical significance. All those having a sense of duty to the country are welcome to join Punarudaya Movement and become its co-partners.
Victor Ivan