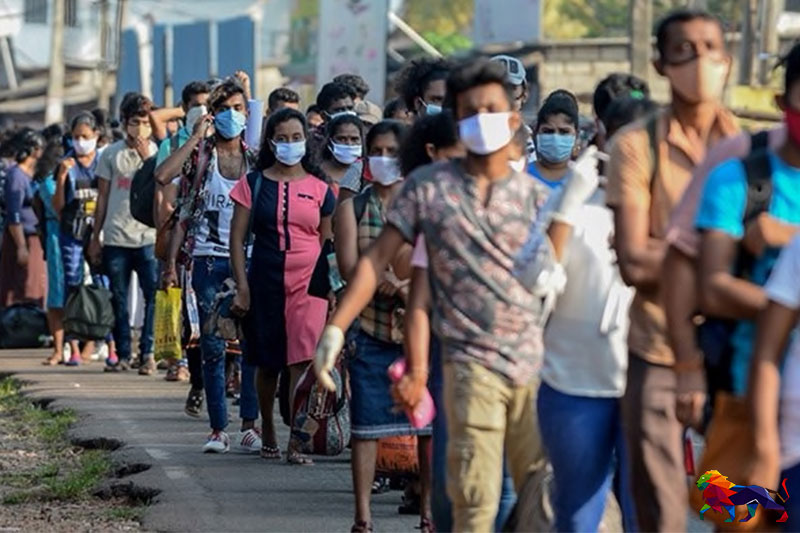 I’ve picked up few wonderful words and phrases in a humble appeal to the President by political leaders wanting to sit in parliament again, like “duty bound, our obligations,
responsible co-operation, good faith, our utmost sincerity”. All sound unique and alien to a political culture that reeks of massive deals stretching from Rajapaksa to Wickremesinghe regimes, Constitutions and law being the least important then. But this pledge to President reads like beautiful fiction. Here are 02 quotes, more for politics in them.

“01. Against the backdrop of a public health crisis caused by the COVID-19 pandemic and the steps taken by the government to control it, a range of new challenges have emerged in Sri Lanka as well. Regrettably the optimism that prevailed in our country until a few days ago that the virus could be managed is now receding. If further spreading of the pandemic is not decisively halted, in the coming few weeks, the country will face the risk of the prevailing public health crisis being compounded by crisis situations in the economic, social and political spheres too.”

“09. In these circumstances, we urge His Excellency the President to respond positively to this offer of responsible co-operation by us at this critical time and revoke the proclamation dated 02 March 2020 dissolving parliament so that all of us can jointly fight to eradicate this virus and also ensure that everything is done lawfully and in compliance with the Constitution. The President can thereafter dissolve parliament whenever the situation becomes conducive to conduct the election.”
(Copied from the joint opposition letter of appeal sent to HE the President Gotabaya Rajapaksa on Monday 27 April 2020).

Seven political parties have made a very timid and a politically pathetic and obedient appeal to President Gotabaya Rajapaksa pleading they be accommodated to share responsibility in handling preventive work on COVID-19 outbreak, so that “…all of us can jointly fight to eradicate this virus”.

The JVP has opted out of this common appeal and is said to have written their own to President Gotabhaya Rajapaksa. What they communicated have not been made public.

These political entities that constituted the 04 year old government (TNA was a proxy) that was displaced after the presidential election in November 2019, now want the President to accommodate them by taking one of the two steps; “revoke the proclamation dated 02 March 2020 dissolving parliament” so that the parliament can meet once again, or “In the alternative HE should at least exercise his powers under Article 70(7) of the Constitution and summon the dissolved parliament”. A key to open the doors of the Diyawanna is all they ask for.

What for? They pledge under “No.08” of their joint plea, “We assure the people of our country that we will not draw salaries nor attempt to defeat the government, nor thwart any of the legitimate actions of the government during this period.” There is no defined period mentioned in the appeal other than the mention, that this “unprecedented national crisis” shows “no signs of early ending”.

The cost of a sitting parliament is not salaries of MPs only. Parliament needs staff on duty. Restaurants have to function for subsidised food. Parliament security and that of all “resurrected” MPs have to be on duty. I won’t be surprised if they collect their fuel allocation, mobile phone allowances, their secretarial facilities and the sitting allowance on the basis, they don’t draw their salaries.

They then say, co-operation of political parties and MPs in the dissolved parliament, “….would greatly contribute to the resolving of a number of urgent governance issues that have emerged amidst the crisis.”  What are they proposing to resolve through their co-operation? It is “Getting appropriate and new legislation passed…..and obtaining parliamentary sanction to the utilisation of monies from the Consolidated Fund” as urgent functions of the parliament.

Bottom line is, they would provide legitimacy to all what the government wants and does, if they are allowed to sit as MPs in the opposition (perhaps to begin with).

What more does this joint opposition offer as answer to what they themselves have very timidly mentioned in their plea as “….If further spreading of the pandemic is not decisively halted, in the coming few weeks, the country will face the risk of the prevailing public health crisis being compounded by crisis situations in the economic, social and political spheres too.”?

There is absolutely no sense in saying, “If further spreading of the pandemic is not decisively halted.…” the country would be in a major socio-economic fix. Their assessment we are still not in a real crisis proves where they are. We were into a major economic crisis when COVID-19 broke on us. Since 20 March when curfew was slammed across the country, we had everything “compounded” into a massive crisis; dislocation of supply chains and food distribution, complete standstill of the export manufacture trade, displacement of over a million employees in export manufacture, uprooting of over 30,000 bus drivers and conductors in private omnibus sector, over half a million 3W drivers squeezed out of daily income and sent on an exodus to villages, unaccounted millions of daily income earners left completely high and dry, rural agriculture deprived of its petty income, schools and universities, shops, groceries and saloons all closed, is far more serious than a “compounded (by) crisis situations in the economic, social and political spheres”  the affluent urban middleclass and their political leaders still don’t realise.

Over one month and a week under curfew with a “modified lockdown” that began with 102 COVID-19 positive cases, now records a total of 611 positive cases at the time of finishing this on Wednesday 29 April at 07.00 am. Eight days ago on 20 April the number was 304 positive cases. On official statements made, within a week since 20 April, 180 naval personnel were confirmed positive. Around 16 army personnel are said to be positive in Kurunegala district and the Special Forces army camp in Welisara was almost closed a few days ago. All that proves major blunders have been made that has virtually brought the country to its knees. “Rubber stamping” them by a parliamentary opposition will not make them valid and effective in controlling this pandemic.

The request for reconvening of parliament is not about prevention of the COVID-19 pandemic. It is about piggy backing a caretaker government by politicians who are afraid they would be left as nonentities, with no elections held. That fear of getting left out from “power politics” is entrenched in their pleading to have the dissolved parliament reconvened. “In view of the necessity to repeatedly postpone the Election, there is now a risk that Parliament would remain inactive for much longer.” (No.05 of joint appeal) “If parliament remain inactive for much longer” what would happen to us?” is the whole tone in that.

There can only be one guess. They perhaps wish once again to become MPs in a scenario where there could be no elections in the near future. If in parliament, they could on a resolution extend the life of the reconvened parliament for another year, citing provisions on duration of parliament before 19A. Well its “constitutional” they would say yet again.

This political gimmick has nothing to do with increasing numbers through community clusters, due to those who do not know that viruses cannot be shot down or bombed to extinction. What we therefore need is a political answer on “social consensus” to present a seriously thought out prevention programme designed with medical expertise and professional discipline. This parliament the opposition wants reconvened has proved over and over again, it can never sit to discuss anything decently, seriously and at length.

We thus need an “out of the box” answer, instead of outdated “constitutional” interpretations from a Constitution people don’t even want to stand for. I would therefore propose a “National Governing Council” (NGC) comprising of all political parties that were in the previous parliament. It could comprise of political party representatives nominated on an agreed formula. One option could be, 01 Councillor for 07 MPs of a political party in the dissolved parliament. Leaving the Prime Minister out of the count, it would thus be 14 Councillors for the 94 MPs (minus PM) the UPFA had. Accepting the reality the UNP is now politically bifurcated, 10 Councillors for Sajith faction (SJB) and 05 for the Ranil faction as the UNP had 107 MPs. For the TNA, 03 Councillors for the 16 MPs and 01 for JVP that had 06 MPs and the single MP the EPDP had. This would total to 35 governing council members, which number is basically the size of a cabinet of ministers.

It is the responsibility of the UPFA leadership, as to how they would share those 14 slots between their alliance partners. It would be so, with SJB and the TNA as well. Underlying condition should be, all Councillors named will be permanent Councillors till the end of its “one year” term. The NGC will be mandated to present their COVID-19 Prevention Programme in detail with a budget for its implementation to the People within 02 weeks. They would also be mandated to develop and present their socio-economic development programme within 04 weeks, for the year ahead. Office of the Cabinet of Ministers could function as the Secretariat of the NGC. We don’t need politicians to tell us what they discussed and decided flavoured and scented with their agenda. The Secretary should be the official spokesperson of the NGC to brief the public through media on all details of weekly discussions and decisions taken at NGC meetings.

Legitimacy of the NGC would depend on how far its work is open and people-based. Open for public debate and discussion. It is for the President to initiate discussion with all political parties in establishing a NGC, as an alternate to reconvening of parliament. More importantly in facing the social crisis that demands serious urgent answers.