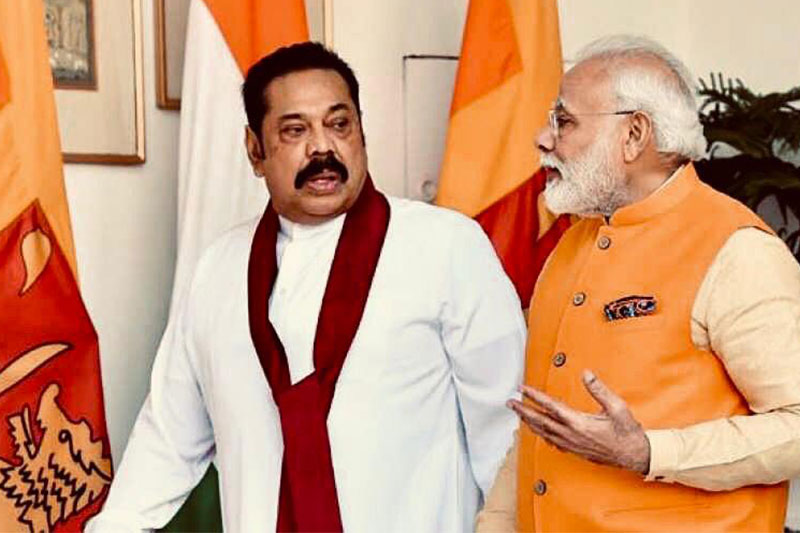 By Dr. Rajeswari Pillai Rajagopalan
Sri Lankan Prime Minister Mahinda Rajapaksa just completed a five-day trip to India, making it his first foreign trip since his appointment as prime minister in late November 2019. While the trip highlighted some areas for collaboration between the two sides, it also left broader questions lingering about the future direction of ties.

By all accounts, Rajapaksa’s visit appears to have been a successful one. For instance, Mahinda touched the right cords in New Delhi even on sensitive issues by stating that developments relating to Jammu and Kashmir and Article 370 were India’s internal affairs. Prime Minister Narendra Modi, for his part, said in his press statement that he appreciated Sri Lanka’s importance not only to India but to the entire Indian Ocean Region. He added that “stability, security and prosperity in Sri Lanka” is an essential element in ushering peace and prosperity in the Indo-Pacific region.

In line with the “Neighborhood First” approach and the “Sagar” doctrine, Modi went on to say that New Delhi attaches “a special priority” to its relations with Colombo, which will no doubt be welcome. Sri Lanka also appears to be satisfied with the comfort level that exists between Modi and Rajapaksa and the pace of the relationship.

But there may be some disagreements that remain. For instance, according to reports citing diplomatic sources, Sri Lanka wants to see “cooperation and progress in SAARC,” whereas India believes that all efforts to strengthen regional cooperation should be channeled to the Bay of Bengal Initiative for Multi-Sectoral Technical and Economic Cooperation (BIMSTEC). Even though Rajapaksa is not thought to have raised the SAARC issue with Modi, he raised this point in an interview with The Hindu where he made a case for SAARC saying “we have already gone a considerable distance with building SAARC and that should be continued.”

Sri Lanka pushing the SAARC is understandable – a Sri Lankan diplomat, Esala Weerakoon, has been appointed to be the next Secretary General of the SAARC Secretariat, and Sri Lanka would like to show some progress in the association. On March 1, 2020, Weerakoon will be taking charge of SAARC from Amjad Hussain B. Sial, his Pakistani predecessor, who has held the post since 2017.  Given this development, Sri Lanka is believed to have urged the Indian leadership to “at least restart the process of discussion on SAARC” but clearly it will be difficult getting India on board.

In addition to official meetings, Rajapaksa also reached out to the media and aired the Sri Lankan interest in some of the infrastructure projects on the bilateral agenda. Rajapaksa was categorical that Sri Lanka will no longer grant important projects such as the Mattala airport to other countries. Mahinda added that projects already approved by Wickremasinghe will be stopped. He also said that “his government has a firm policy on not allowing any national resources to be given to foreign control.”  However, at the same time, Rajapaksa seemed upbeat about the LNG project as well as the Eastern Container Terminal in Colombo, which will see joint investment by India and Japan.

On the debt repayment issue with China, Rajapaksa defended the Chinese by saying Beijing helped Colombo in Sri Lanka’s post-war reconstruction and development efforts. He went on to note that the debt toward China is only 12 percent of the overall external debt and that the funds from China was used for developing infrastructure. He faulted the previous government for giving away strategic real estate in the Indian Ocean such as Hambantota for the debt. Defending China of course probably earned Rajapaksa some brownie points with Beijing and gave some balance to Sri Lanka’s external alignments.

To be sure, Rajapaksa also stated India is a “relation” whereas others are friends. But he was uncomfortable with concepts like the “Indo-Pacific,” which he did not use though it was used by Modi, as well as with groupings like the Quad. Colombo clearly does not want to takes sides against China.

Of course, the thorny Tamil issue was also highlighted during Rajapaksa’s visit. In fact, Modi in his press statement said, “I am confident that the Government of Sri Lanka will realize the expectations of the Tamil people for equality, justice, peace, and respect within a united Sri Lanka. For this, it will be necessary to carry forward the process of reconciliation with the implementation of the Thirteenth Amendment to the Constitution of Sri Lanka.”

However, during the media interview with the Hindu, Rajapaksa made no commitment on how the 13th amendment will be implemented, except to say no solution to the problem will happen without it being acceptable to the majority community. He elaborated on the point saying “We want to go forward, but we need to have someone to discuss, who can take responsibility for the [Tamil] areas.  So the best thing is to hold elections, and then ask for their representatives to come and discuss the future with us.” Rajapaksa is hoping for a win in the upcoming parliamentary elections in April and thereafter to hold provincial elections that could pave way greater engagement with the Tamil population.

While the Rajapaksa visit has ended successfully, among the tricky issues, one that New Delhi needs to focus on is to find a balance between Sri Lanka’s interest in SAARC and the Indian preference for BIMSTEC. Given India’s larger strategic footprint across the Indo-Pacific and India’s Act East policy, BIMSTEC makes sense. But Sri Lanka is not keen. India needs to work on building support for it in other capitals in South Asia. Also, New Delhi has to be able to offer economic opportunities for these countries to make BIMSTEC attractive. Otherwise it will be seen as just empty anti-Pakistan rhetoric with no real worth for the small countries in the region. More generally, India should also be careful not to alienate the smaller countries who might not want to antagonize China.

*Dr. Rajeswari Pillai Rajagopalan is Distinguished Fellow and Head of the Nuclear and Space Policy Initiative at the Observer Research Foundation (ORF), one of India’s leading think tanks.Previously, she held stints at the National Security Council Secretariat, where she was an assistant director, and the Institute of Defence Studies and Analyses New Delhi, where she was a research office.