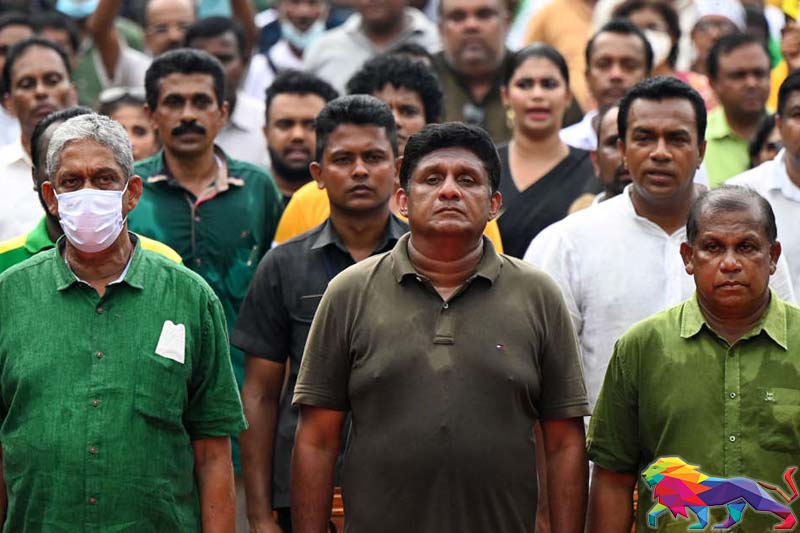 The Samagi Jana Balawegaya (SJB) abstained at the parliamentary vote on the interim budget 2022.

The reasons could be surmised by the excuses given by the SJB – “President Ranil Wickremesinghe is SLPP’s prisoner” (Sajith Premadasa), “Budget was good, but it cannot be implemented practically” (Harsha de Silva), “The UNP and the SLPP will contest together at the next election” (Rohana Bandara), “We cannot pamper the government just because it was the budget” (Mujibur Rahman).

No one should be surprised over Ranil being entrapped by the Rajapaksa family’s grip. Had Sajith or Dullas been the president, they would likewise have worked together with the majority SLPP. To some extent, the attitudes would change according to the person.

Taken individually, the SJB is closer to Ranil than to Dullas. They could agree. Why does the SJB behave in this manner with regard to Ranil’s policy manifesto and the interim budget?

It is the responsibility of both the SJB and the Aragalaya (struggle) to secure reforms for the country by strengthening Ranil’s ideology without allowing the Rajapaksas to claim it. Despite Gotabaya’s expulsion, the SLPP’s parliamentary majority remains.

The opposition has to make sure to control the heavy weapon called the executive presidency that functions above parliament, if Aragalaya’s aspirations are to be won. In any struggle, the enemy’s laying hands on weapons is impractical. Keppetipola and his men had to die at the 1818 rebellion because, in blind patriotism, they had returned the weapons of the English to them and instead used knives and clubs against them.

Hunger and poverty affect all, irrespective of nation, language, religion or culture. MPs who fill their bellies to the full at the public’s expense would support their leaders, rather than representing aspirations of the people.

The SJB’s abstaining at the budget vote will only worsen Sajith’s hypocrisy and political stupidity. That is confirmed by Harsha, Marikkar, Rahman not voting for the policies they find suitable according to their conscience.

After backing the Rajapaksas for 17 years, a majority in the SLPP are today supporting their political opponent Ranil. As opposed to it, the SJB that had once accepted Ranil’s leadership, today behaves in this manner as it fears that Sajith will be finished if Ranil takes the country out of the present abyss.

Why does the SJB evade the issue by asking if the SLPP will support Ranil’s policies? – because it is against Ranil or the UNP or because it is submissive to Sajith?

Sajith launched the SJB by leaving 5.5 million Rajapaksa opponents in the lurch with the intention of destroying Ranil and the UNP together.

When he launched the SJB, Gotabaya was the president. At that time, what the country needed was a strong force to counter the Rajapaksa regime, and not allowances for a personal agenda. It was just like today’s common hope to rebuild the country by forgetting everything else. 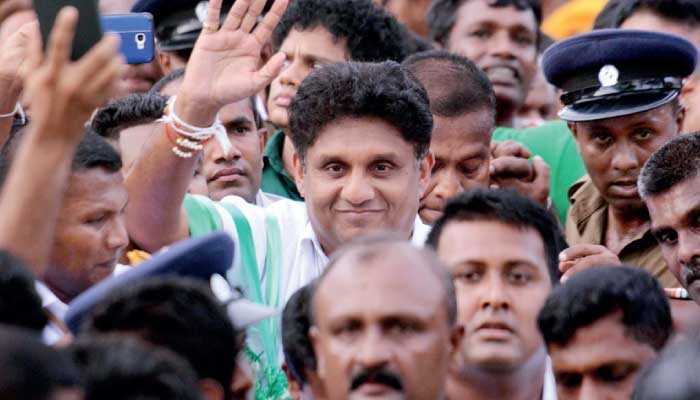 Only if he had a theoretical vision, what Sajith should have done was to water down the public opinion for the SLPP at the 2020 general election. Had he done that, the SLPP wouldn’t have gained a two-thirds majority. Sajith caused massive harm by not accepting the country’s leadership then and again in 2022.

On the day Sajith left Ranil and the UNP, a friend of mine, a retired principal, called him an ass. I was so surprised I asked whom he was referring to. With a smile he said it was Premadasa’s son. He predicted the Rajapaksas would gain a two-thirds majority.

What he said was true. In 2019, a litre of petrol cost some Rs. 120, a gas cylinder some 1,040. How much is a loaf of bread? How much is a Panadol tablet? Sajith, Harsha, Rahman, Marikkar, Rohini, Thalatha, who supported Ranil against Mahinda in 2018 appeared on behalf of Dullas, a former Mahinda supporter, against Ranil in July 2022.

On both occasions, the majority in parliament took the side of the people.

Taking the country further downhill is what the SJB is doing even now, after it should be blamed equally along with the Rajapaksas for the country’s falling due to the path taken by Gotabaya after rendering independent commissions inactive and pushing aside the legislature and the judiciary.

For a majority in the SLPP, electing Ranil as president in place of Gotabaya just 20 months after the latter came to power, is a way of seeing the reality, a correction of the mistake. The SJB that rejected Ranil in 2020 continues to hate him. The SJB’s evasion will not cause Ranil to fall. That is because he has nowhere to fall further. The ones who will fall is the people who are already paralyzed by hunger and unemployment.

Handing the country to Ranil is in a way a system change, after the Rajapaksas ran the country by rendering the law inactive and granting tax concessions to businessmen.

A vision of both in the short term and in the long term only will revive the country.

The SJB supported Dullas at the presidential vote. Dullas is from the SLPP. Not a mere SLPPer, but just like Vasudeva, a pauper in vision and strength after left more than a decade to be on his knees near the Meda Mulana gate.

Harsha prepared an economic programme in line with the economic vision of good governance for Dullas, who would have been prepared to make Namal the president had this country not been in this crisis. The SJB rejects that positive programme just because Ranil is the president. Had Dullas been the president, Harsha and Eran, together with the SLPP, would have implemented that very same economic policy.

It is quite logical to say so, because even Sajith believed that Dullas had the backing of a majority in the SLPP.

Therefore, the SJB is planning to sacrifice the people, who now manages to take a breath because of Ranil, to the political ritual to destroy him. Sajith’s hypocrisy allows Basil to manipulate the executive even after Gotabaya’s expulsion.

The election demanded by them will never be allowed by a majority in parliament. The SJB did not realize its objective because none in parliament likes a snap election.

Sajith who made an uproar that the Rs. 5,000 allowance distributed during the covid lockdown should instead have been Rs. 25,000, should have strengthened the budget by applying makeup to Dullas and together with GL’s political playact, if he had a conscience actually.

Ranil’s interim budget is a bag of relief although Rohini turned it down after saying at Sajith’s instigation that children were badly malnourished and 61,000 families are without food.

What is the connection between an interim budget with such relief and party politics? Who will question if people receive this relief? Rohini, Harsha, Marikkar are trying to neutralize Sajith’s future enemy and they have no love for the country.

Along with the JVP, the SJB is against the social security draft bill becoming law. Eighty per cent of state revenue goes to pay salaries and pensions. Debt and interest payments cost 70 pc. A government by Sajith too, will have to bear this burden, and the JVP will do the same even then. 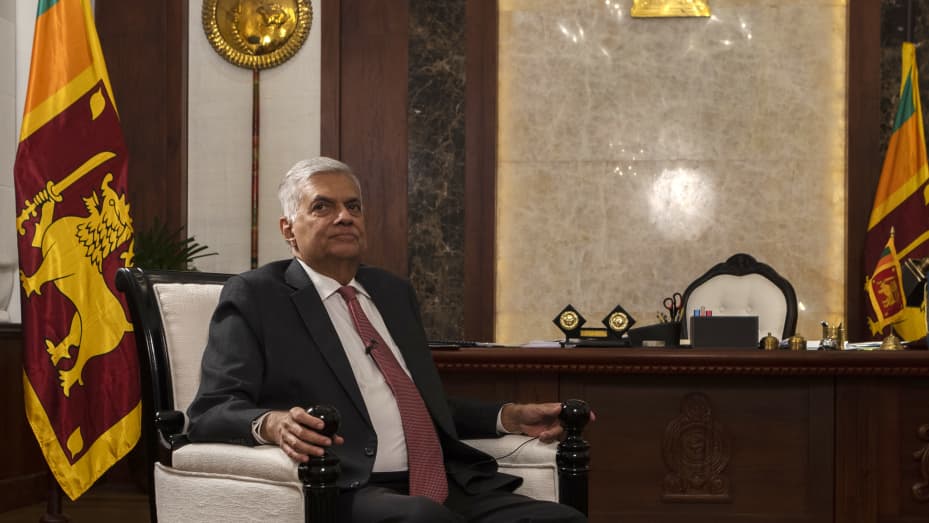 The opposition leader was entitled to the premiership that fell vacant on May 09, but that was not claimed because the politically-neuter Sajith was frightened by the Aragalaya. That paved the way for Ranil to the presidency.

Had Gotabaya been frightened by Sajith’s outbursts and resigned, it would either be Mahinda or Basil who would have become president, no Wasantha Mudalige or Pathum Kerner. Even today, the SJB remains divided over Sajith's evasive tactic.

Dr Verghese Kurien, father of India’s white revolution, said that one who is committed to the common good should be free of other desires. Sajith may not have even heard of that saying.

Sajith did not attend the all-party conference convened by Gotabaya in March 2022 as he feared Ranil would have received more media exposure than him there. Sajith was shaken when Gotabaya had to make a public apology to Ranil at its commencement.

Ranil’s call at the APC for unconditional support to rebuild the country is valid even today. If that is not followed, we will be left with a collapsed country. A nation of ruins.

The SJB remains defeated as always, since it fails to identify greed and leadership. Sajith left his father’s bastion Colombo Central and chose Hambantota instead as he had a liking for the wildlife funds. The political mistake he committed in 2000 was corrected 20 years later, in 2020.

When he was named the UNP presidential candidate on 03 October, 2019, only eight days remained for the local government polls in Elpitiya. Going against the UNP’s wish to hold the rally after October 11, Sajith called the event for that very same day to leave the party in defeat in Elpitiya.

By the end of last week, Patali joined hands with Chandrika. The SJB’s Kumar Welgama launched a new party.

The UNP anniversary in September was an all-party meeting of sorts. Reality is unavoidable. Gotabaya resigned and paved the way for Ranil to become the ruler to allow for the victorious reality of 2015.

With, or without Sajith, that reality is becoming active again.

*Writer Chandrasiri Seneviratne is a lawyer and freelance writer. This is a translation of the original article which was first published on "Anidda".