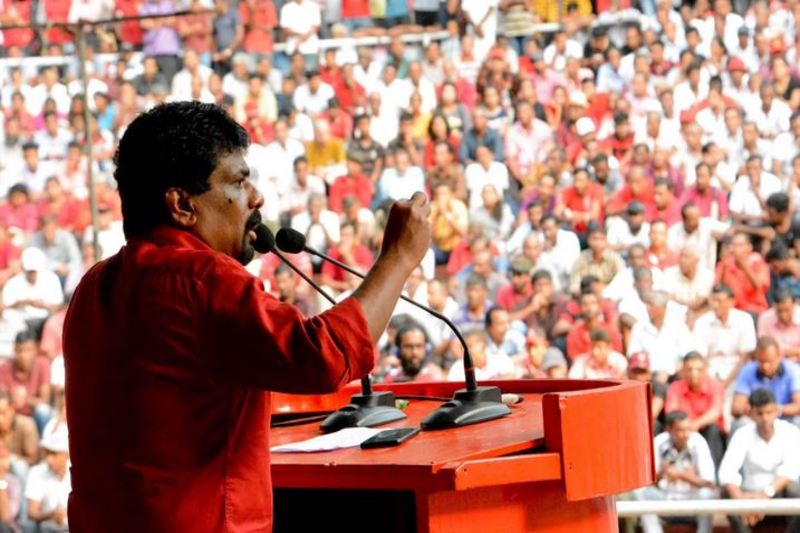 "We are ready to take up the leadership of the country”, declared Anura Kumara Dissanayake, leader of the Jathika Jana Balavegaya (National People’s Power - NPP) and the JVP at the Convention held on the 20th December.

He said so in a tone to impress the audience that it was the latest strategy that his party was going to adopt. In this effort, he made an attempt to paint a picture that his party, unlike the other two parties, the UNP and the SLFP, has no previous experience in the rule of the country and therefore, the JVP is different from the other two mainstream parties, and could claim for an uncorrupt heritage. There is some truth in what he says, but in fact, there are some flaws in the assertions that he has underlined.

History of the JVP in brief

The JVP is now 57 years old; its origin can be traced back to 1964. Its parliamentary history is also as old as 27 years. It can be considered as a party that has attempted to seize the ruling power using various tactics, not just one. In 1971, it tried to seize power through an armed insurrection. In 1982, it contested the presidential election, not to win, but to deprive the SLFP of its place and appropriate it upon their party.

Later, it assumed an underground political path under the cover of the ban imposed on the party in 1983, and launched a horrendous uprising in 1987-89 to seize power. In 1994, the JVP abandoned the violent path skillfully, and switched over to the Parliamentary system following the defeat of that uprising.

Then in September 2001, the JVP entered into a Memorandum of Understanding (MOU) with the United Front Government to form a probationary government. Again in January 2004, it entered into an Electoral Alliance called the United People's Freedom Alliance with the United Front. Consequently, having contested the election under the alliance, it was able to increase the number of seats it had in the parliament from 16 to 39. It was able to secure four powerful ministerial portfolios in the coalition government headed by President Chandrika. The JVP withdrew from the coalition government when the President decided to absorb a group of defectors from the UNP to the government rather than depending solely.

The JVP contested the Presidential Election 2019, not to win it, but as a means of increasing its power in parliament. But it failed to achieve the desired objective. At present, in view of the apparent confusion in the right-wing political camp in the opposition, the JVP seems to believe that it might stand a chance of securing the ruling power at the next election.

It is not only the ruling parties that influence the ideological milieu of a society; there are other groups and forces also that influence it. It was not a ruling party, but an ideological school of thought that has socialized the belief that the kidney disease prevalent in the Rajarata region has been caused by the use of agro-fertilizers and agro-chemicals.

Also, the episode of drugs alleged to have been introduced by Muslims to make Sinhala women sterile was fabricated and socialized by a similar group. Although anti-Tamil racism has now been abandoned, the JVP has played a major role in inculcating a progressive-looking anti-Tamil racist vision in the minds of the Sinhala Buddhists community. The principle of violent struggle and the practice adopted to launch it could be considered as an important factor that has impacted the state of current decay, bankruptcy and failure of Sri Lanka.

Although theft is a serious crime, it can be said that the damage inflicted on society by the destroyers of wealth is greater than the damage caused by the thieves. Even stolen wealth enters the circulation of money in various ways. But the wealth that is destroyed once does not enter the circulation like that. The devastation wrought on Sri Lanka by violent and rebellious movements is enormous. It can be said that not only fraud and corruption, but also destruction of wealth has contributed to the current crisis in Sri Lanka.

The JVP may have achievements to be happy about in its parliamentary history; but it is important to note that it has not been able to become a model that could be emulated by the political parties in Sri Lanka.

The parliament was in a state of corruption when the JVP joined parliamentary politics. Plunder of public property had become a significant and permanent feature of state administration following the establishment of the presidential system in 1978. The incumbent presidents used to adopt unlawful means to enable their team of MPs to amass wealth in order to keep them loyal and contended. In this process, the presidents allowed the MPs to transact business with the government.

As a result, some of them have acquired valuable government land and become planters, some have become large contractors, and some others licensed businessmen. Liquor licenses were issued through MPs during the reign of president Chandrika. So, a large number of MPs have become tavern owners. Such practices can be considered as serious offenses punishable by depriving the MPs involved in them, of their positions and even civic rights. But the presidents in power prevented the law from being enforced against them. This situation has led to corrupt Parliament to a massive extent.

Although the JVP had the potential to make a vehement protest against this ugly practice in Parliament and change the situation, for whatever reason, it refrained from talking about it. In doing so, it has deprived itself of the opportunity to gain greater recognition among the people.

What is the solution?

Although the general conduct of the JVP MPs may be relatively better than that of the MPs of other political parties, the policy they have followed in regard to duty free vehicles is blemished. The system of giving duty free vehicles to MPs in such a way that they could sell them and make money can be considered as an illegal and corrupt system that gives the MPs undue privileges. It can be considered as a practice contrary to the accepted democratic parliamentary traditions, and also one that has caused a huge financial burden on the country.

Later, the practice of offering duty free vehicles had to be extended to higher ranking officials in the public service also, because those who initiated it wanted to justify the system maintained for the Members of Parliament. In the end, it became a wasteful and corrupt system incurring an unbearable burden on the country. Now, not only the politicians, but also the government officials who fall into higher echelons or supra category of public administration use luxury cars costing over Rs. 30 million and incurring highest cost of fuel consumption. It can be said that the corrupt system of offering duty free vehicles to MPs and public servants has also contributed to the state of bankruptcy of the country. JVPs claim that “we haven’t kept the money realized from the sale of duty free vehicles with us except that we have given them to the party fund” will not rectify the error. The money that has gone to the JVP party fund is nothing but the money that should have gone to the government treasury. The JVP cannot exonerate itself of this fault on account of its toleration of such a wasteful and destructive system whilst at the same time being a party to it as well.

The speeches made at the convention held on the 20th do not show that the JVP has a profound analysis of the crisis facing Sri Lanka and how to overcome it. Also, the pamphlet titled "A Quick Approach to Overcome the Crisis" circulated on the occasion of this convention too, does not offer an objective and insightful analysis of it. What is their true analysis of the crisis facing Sri Lanka? What are the solutions they offer to solve the crisis? There is another major question to ask. What do they intend to do if there is a collapse of the state before the next presidential election? So far, only Champika Ranawaka and Ranil Wickremesinghe have shown some sensitivity to this question. What will happen if the state collapses with the collapse of the government, before the next election?

(This email address is being protected from spambots. You need JavaScript enabled to view it.)