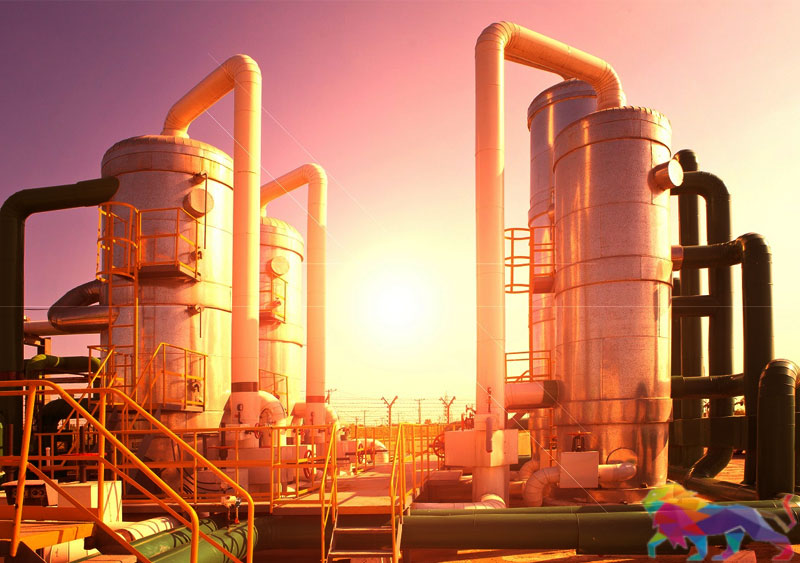 The most recent power plant to be built in Sri Lanka was the Norochcholai coal power plant built way back in 2011.

The third phase of the Norochcholai power plant was completed in 2014 and is expected to add 900 MW to the national grid.

According to the data, the current generation of electricity in the country is a total of 4217 GWh. By 2025, Sri Lanka will need to increase this to 6966 GWh. Thus, in less than four years, 2,749 GWh will have to be added to the national grid.

This statistical target is important in relation to national electricity as all economic goals in the country can only be achieved if this target for national power generation is achieved.

As a country, we had achieved this goal by the end of 2015, but due to the failure of the good governance government to maintain it, it can be said that the 'future of electricity' is once again in the dark.

On the other hand, the 'Nation's Electricity Goal' today is not limited to meeting the electricity needs of all, or all parts of the country, 24 hours a day, 365 days a year.

Instead, the word 'concession' has been added to it today. Concession goes beyond the meaning of low cost for the electricity consumer. That concession should also apply to all taxpayers in this country.

If the huge loss to the Ceylon Electricity Board (CEB) is not 'concessional', it will indirectly be passed on to the people of this country. Accordingly, within the national electricity target, the unit price of electricity should be reduced and the loss of to the CEB should be minimised.

Loss and Economic risk of Power and Energy :

The CEB still has to repay Rs 210 billion to external parties. The Ceylon Petroleum Corporation (CPC), Bank of Ceylon and People's Bank are now at risk on the back of this loss and debt.

However, according to the carbon emissions process, the Sri Lankan government has decided not to build any new coal power plants.

Harmful gases such as sulfur dioxide, which are added to the air by diesel combustion, are not produced by the combustion of liquefied natural gas. If one were to take diesel, coal, and LNG, the latter is the most environmentally friendly and the least expensive option. As a result, LNG will likely be the foundation of future power generation in Sri Lanka.

The proposal to set up an active LNG power plant for the first time in Sri Lanka was initiated by former Prime Minister Ranil Wickremesinghe.

It was limited to an agreement in the context of several issues, including the Japan-India joint resolution, as well as the Chinese resolution, the Korean resolution and so on. Several projects had come up from time to time during the period of the good governance government.

The main situation was that all the proposals were unsolicited due to the reluctance to compete. Also, for whatever reason, these proposals did not materialise.

US Ambassador to Sri Lanka Alaina B. Teplitz in a letter to President's Secretary Dr. P.B. Dissanayake on June 22, 2020, noted that New Fortress, a New York-based energy company, has expressed interest to invest in a LNG power plant in Sri Lanka as a foreign direct investment.

The U.S. Ambassador in the letter also noted that the company plans to build a 300 MW gas power plant, convert the Yugadanavi power plant from diesel to gas, and build terminals to supply gas to these power plants. 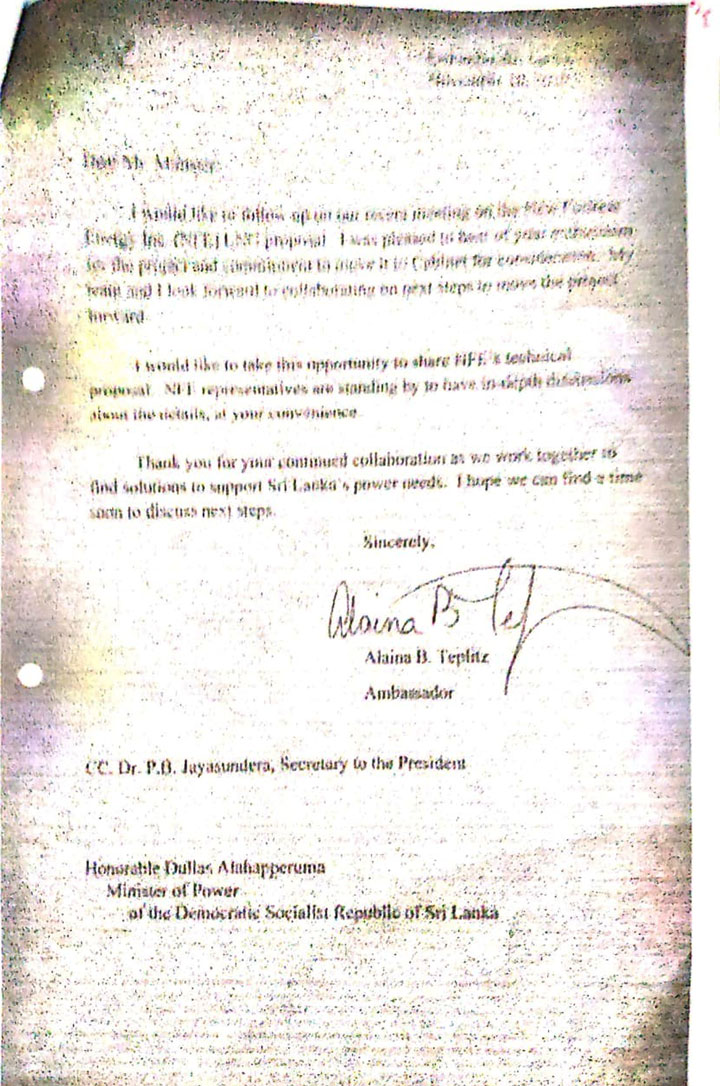 Presenting a cabinet paper for this purpose, the background for the relevant proposal was prepared during Mahinda Amaraweera’s tenure as the Minister of Power and Energy.

However, the situation changed due to the general election and the next cabinet paper was presented by Minister Dullas Alahapperuma.

The cabinet paper tabled on October 19, 2020, outlines the current situation regarding power generation in Sri Lanka. 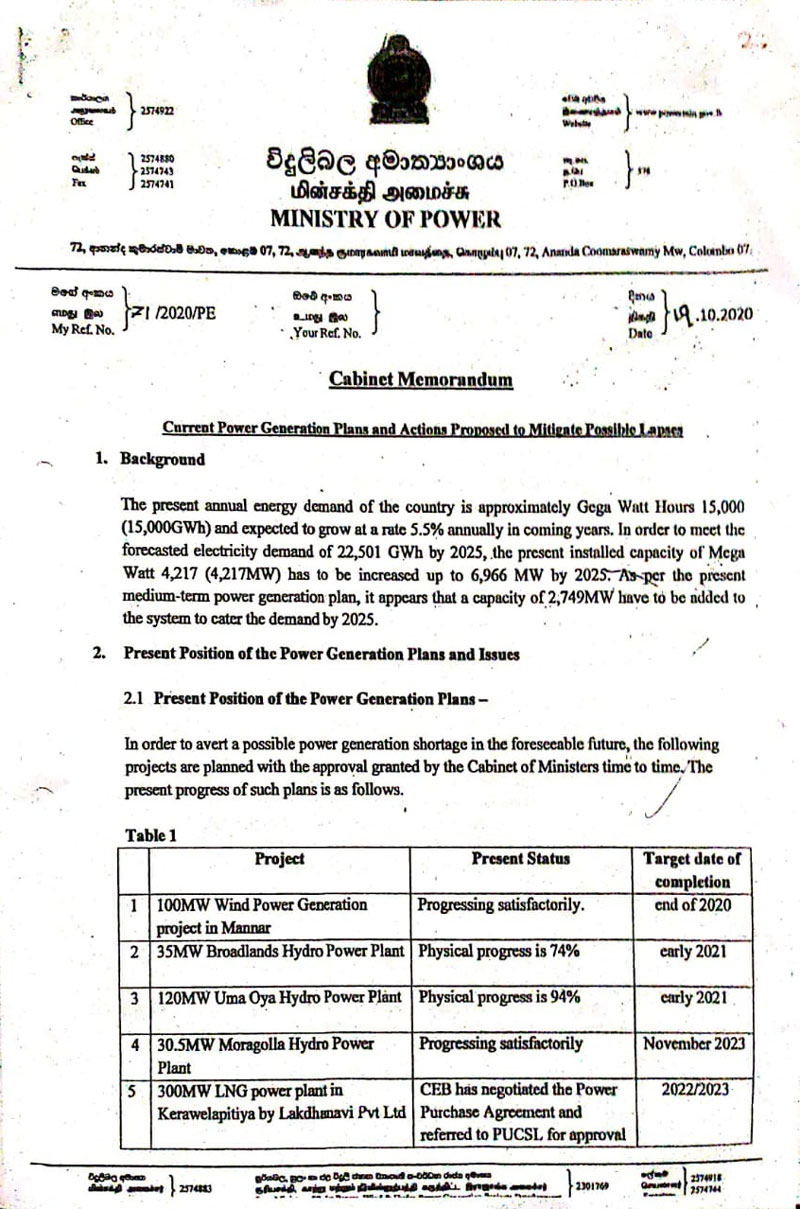 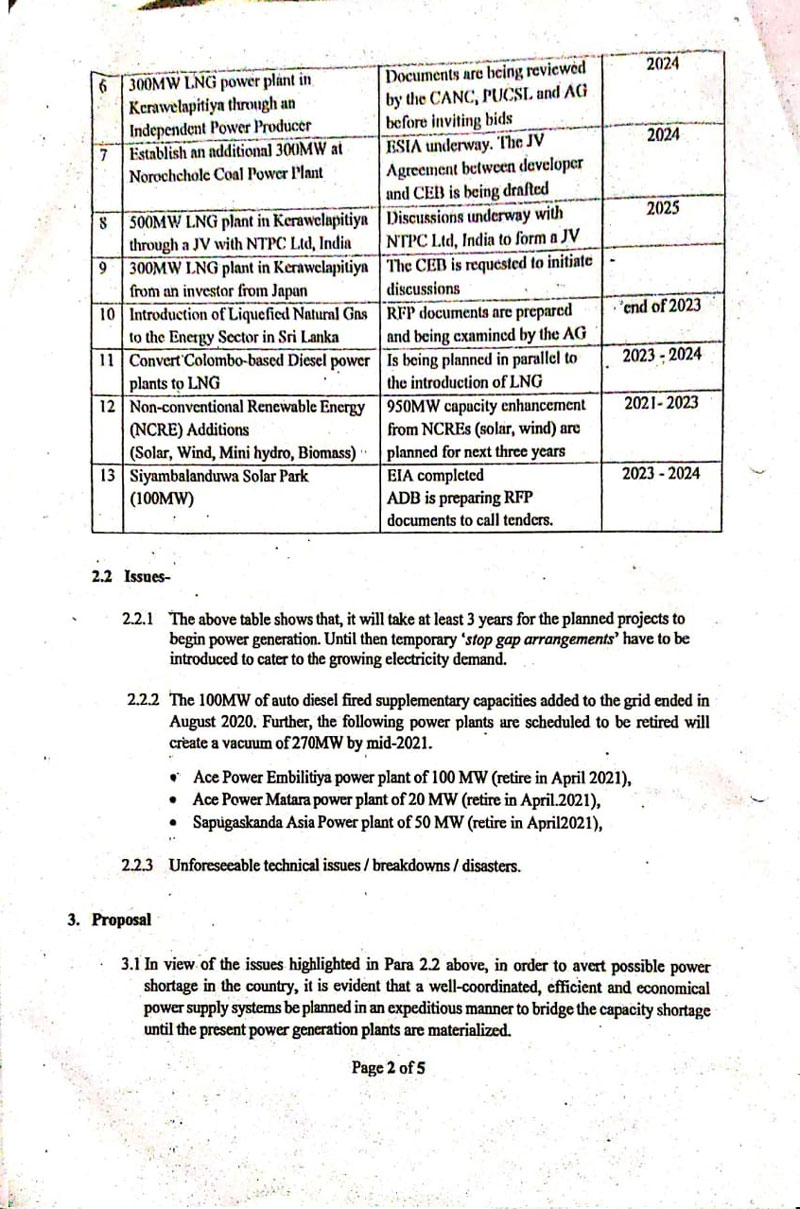 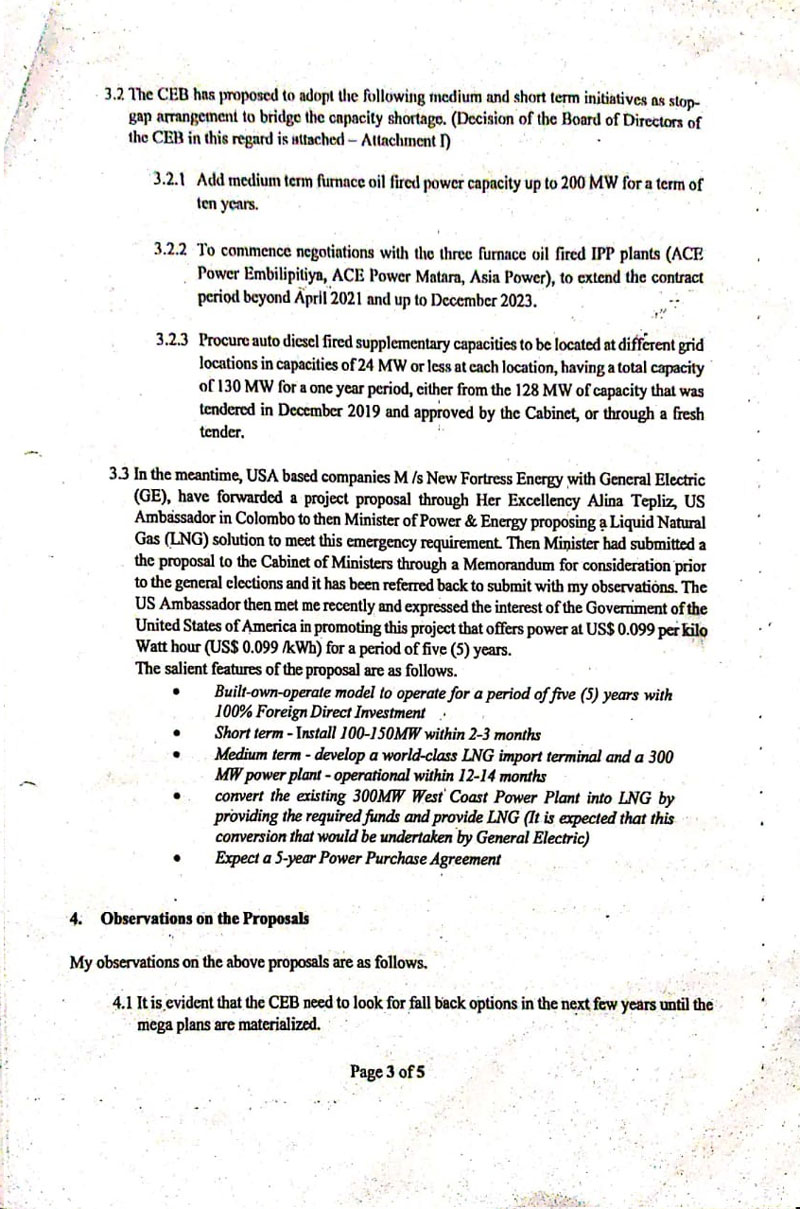 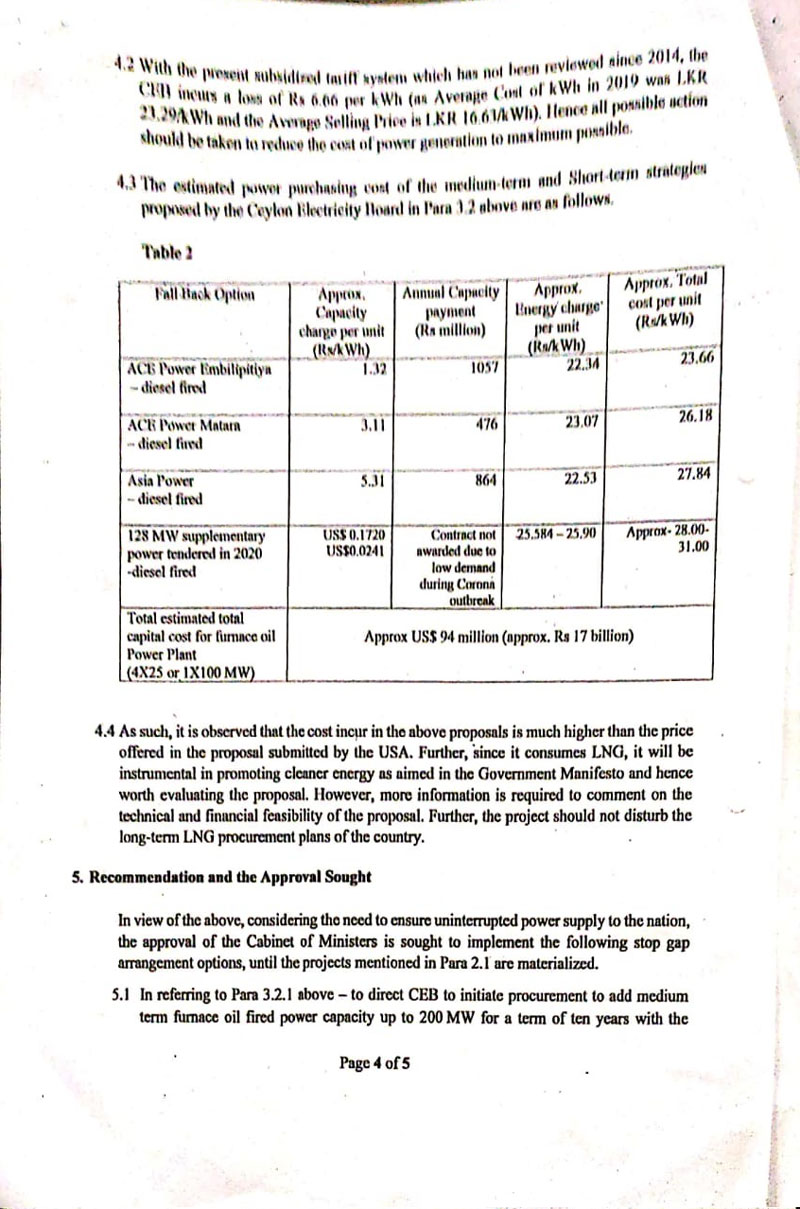 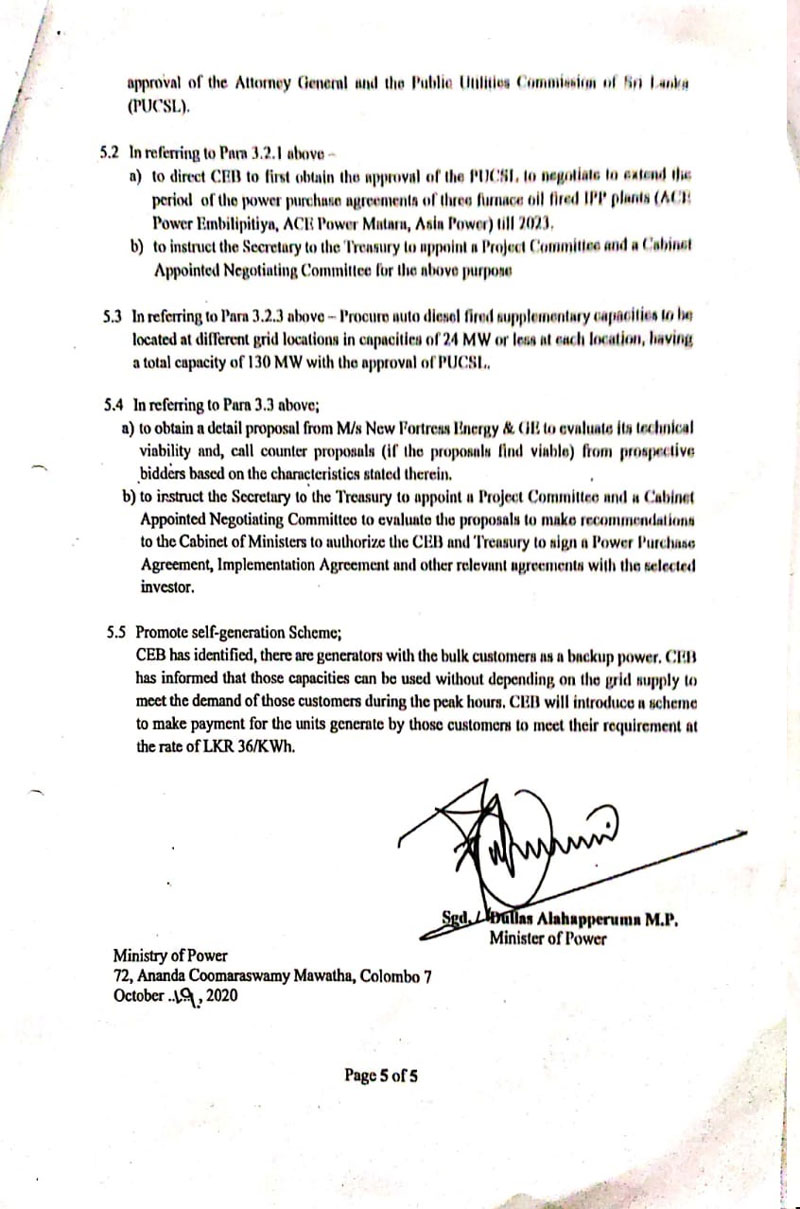 # According to this cabinet paper, the construction of a 100 MW wind power plant in Mannar will be completed by the end of 2020. However, no such power plant has contributed to power generation in the country until the end of 2021.

# The cabinet paper states that the #% MW Broadlands hydro power plant is completed and says it will launch in early 2021. However in reality, work on the power station is yet to be completed.

# Although the cabinet paper states that 120 MW from the Uma Oya project and 30.5 MW from Moragolla will be added in early 2021, they are not yet operational.

# It also states that 300 MW of gas generated by the Lakdhanavi power plant will be added to the national grid between 2022 and 2023. Even so, there were no plans for any LNG plants at the time.

# Although it has been mentioned that 300 MW will be added to the national grid from the Kerawalapitiya power plant in the year 2024, it remains a mere dream to achieve such a goal given that the tender process has not been completed yet.

# It has been stated that by 2024, the third phase of the Norochcholai power plant will generate 300 MW, but it has been stopped due to a policy decision taken by the government.

# The Kerawalapitiya LNG power plant was set to provide 500 MW by the year 2025 through a joint venture with India but no work has been done yet.

# Although it has been said that another 300 MW power plant will be launched in Kerawalapitiya with Japanese aid, no steps have been taken to commence it as yet.

# The cabinet paper has also pointed out that by the end of 2023, the Kelanitissa Diesel Power Plant will be converted to a LNG plant.

Although the data in the cabinet paper did not show any success in achieving the targets, it did emphasize that LNG was the basis for power generation. According to the cabinet paper, 2200 MW should be produced through LNG.

The time periods of three diesel power plants supplying more than 170 MW were due to expire and the CEB had decided not to extend the period due to rising prices.

An overall evaluation of the national power grid could have been easily done by analysing the cabinet paper presented by Minister Dullas Alahaperuma.

It stated that there was a shortage of 270 MW at that time and that more MW were required as there was a possibility of sudden breakdowns which meant that the CEB would have to go for emergency purchases at exorbitant prices.

The cabinet paper mentions the investment of New Fortress in this context. It said it was a foreign direct investment and had sought permission to build 150 MW of emergency power within four months and to build a new 300 MW LNG power plant at a cost of USD 0.99 per kW (approximately Rs. 19.78) for a period of five years.

According to the cabinet paper, the proposal submitted by New Fortress has been filed under five points.

The Minister drew attention to these proposals and requested the Cabinet to allow other companies to compete for these bids. The Minister also appointed a Cabinet-approved Tender Board and a Technical Evaluation Committee.

Even at this stage, LNG is still available as an energy source for the country. It had become an essential source of energy but the projects for it were limited to mere words and long-term goals.

Although a Cabinet-approved Tender Board and a Technical Evaluation Committee have been appointed for the tender, it has not been convened and no action has been taken in this regard.

The Ministry of Power and Energy replied that due to another tender procedure being followed, the tender prepared in accordance with the New Fortress proposal would be dealt with after that tender.

Accordingly, the tender is for a Floating Storage and Regasification Unit (FSRU) and Pipeline Infrastructure and Supply of Liquefied Natural Gas.

A FSRU is a floating terminal with storage and regasification facilities. These units can either be specifically designed for the purpose of storing and regasifying LNG or be modified LNG carriers.

Furthermore, New Fortress had also proposed to build a floating warehouse and pipeline for the deal, and the prices had become a public record.

Thirty two bidders had submitted bids for this tender. Out of the the two bids that were selected in the preliminary stage, only one bid was able to get the nod from the Technical Evaluation Committee, i.e. the China Harbour Engineering Company (CHEC).

Accordingly, the price given by CHEC for the relevant tender was around Rs. 280 per kW. According to the prices of New Fortress, it was Rs. 18. In terms of time, it was three years for China Harbor and one year for New Fortress. The question now arose as to who was eligible.

US Secretary of State Mike Pompeo, who arrived in Sri Lanka on October 28, 2020, also discussed about the New Fortress proposal.

Accordingly, Foreign Secretary Admiral (Prof.) Jayanath Colombage, had sent a letter to the Secretary of the Ministry of Power, Wasantha Perera, stating that the Assistant Secretary of the US State Department, Francis R. Fanon of the Bureau of Energy Resources had informed Foreign Minister Dinesh Gunawardena about the New Fortress proposal.

He had pointed out that the discussion was held in conjunction with the meeting with Secretary of State Mike Pompeo. The Foreign Secretary had stated that the US Ambassador had inquired about this even before November 19, 2020, when he had sent the letter to Secretary of the Ministry of Power and Energy Wasantha Perera.

The government instead gave the opportunity to other parties to also submit competitive bids.

Despite such an opportunity, the government proposed to acquire shares in the Yugadhanavi power plant owned by the West Coast Power Ltd., instead of giving a single investment opportunity to the New Fortress company.

The Yugadhanavi power plant owned by the West Coast Power is being built following a proposal made in 2007 to obtain electricity from LNG.

Even so, it still runs on diesel. Although the state share to be borne by the government was Rs. 225 million, the government did not have the funds for that share.

Therefore, the agreement reached between the government and West Coast Power an be described as - "You raise money to build the power plant and earn money, we will buy electricity according to the prescribed procedures."

Accordingly, West Coast Power had the opportunity to borrow 30% of the total estimated cost in installments and the remaining 70% from American, French and Hong Kong based banks.

CEB to reacquire plant in 2035

The overall agreement was to have the plant transferred to the Ceylon Electricity Board by 2035.

West Coast Power had to provide a government guarantee to foreign banks in obtaining loans.

The Treasury maintained all these as state assets. In the end, the Yugadhanavi power plant obtained a loan of 70% and the loan is due to be repaid in March 2022. About 40% of the 50% stake in the government-owned company was transferred to New Fortress.

The other two major indices are the Japan-Korea Marker (PLATTS) and the Qatar-based Brent Crude.

Sri Lanka has made it a public policy to obtain natural gas at a minimum price after considering these prices.

The Ceylon Electricity Board estimates that 22,500 GWh of electricity will be generated by 2025. It is not a mere goal as the country could face electricity shortages if it is not achieved.

How can such goals be achieved in an environment where no major power plant is connected to the national grid from 2013 to date? No matter what kind of solution is proposed, many only protest and fail to provide an alternative solution.

The cabinet paper submitted by Finance Minister Basil Rajapaksa is found below. 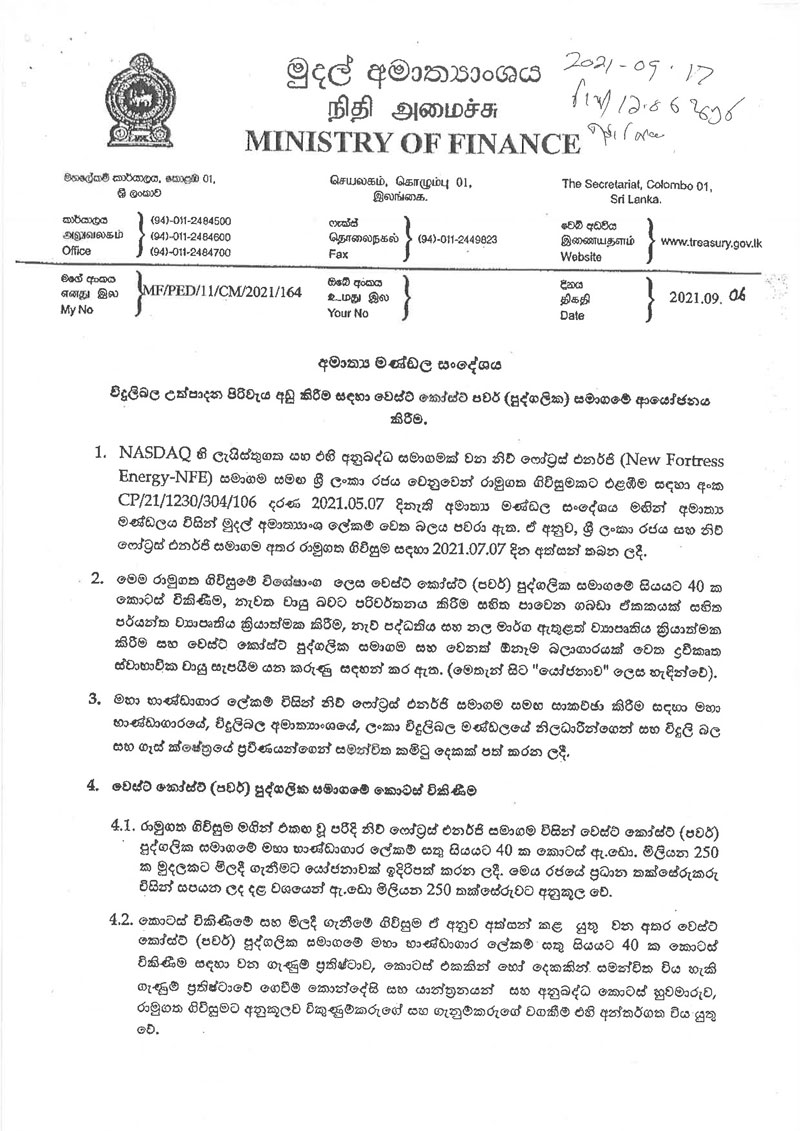 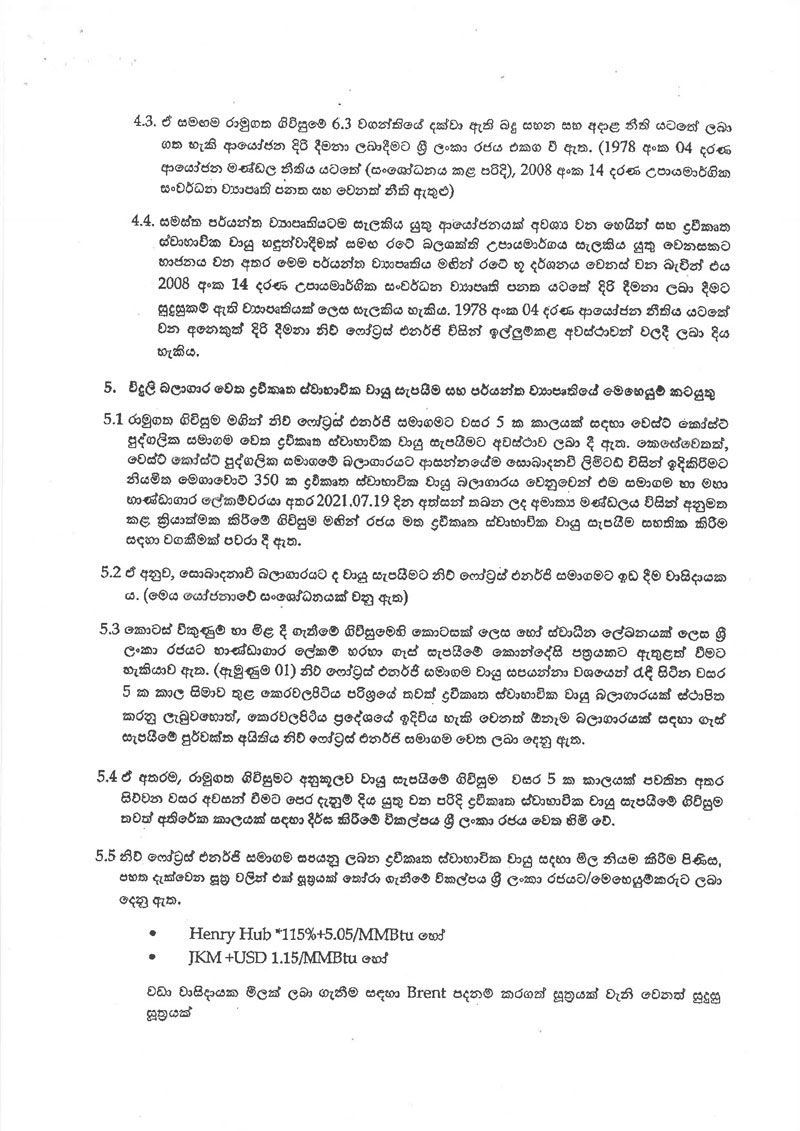 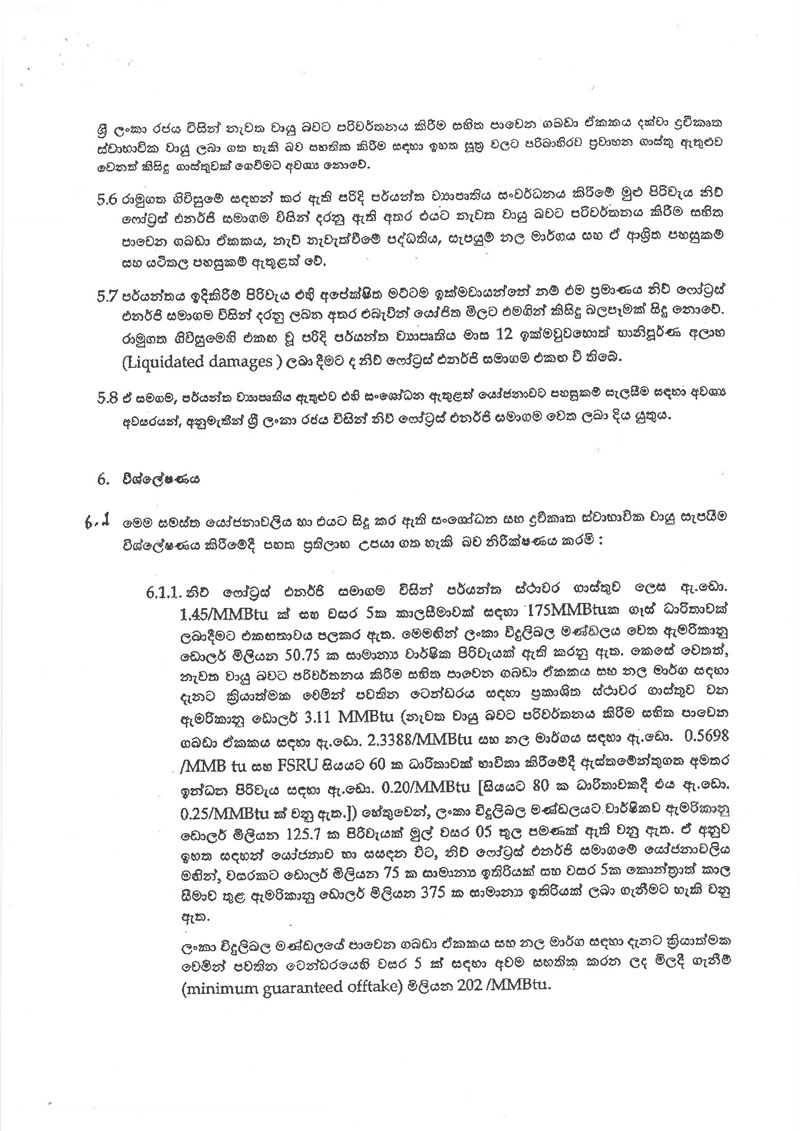 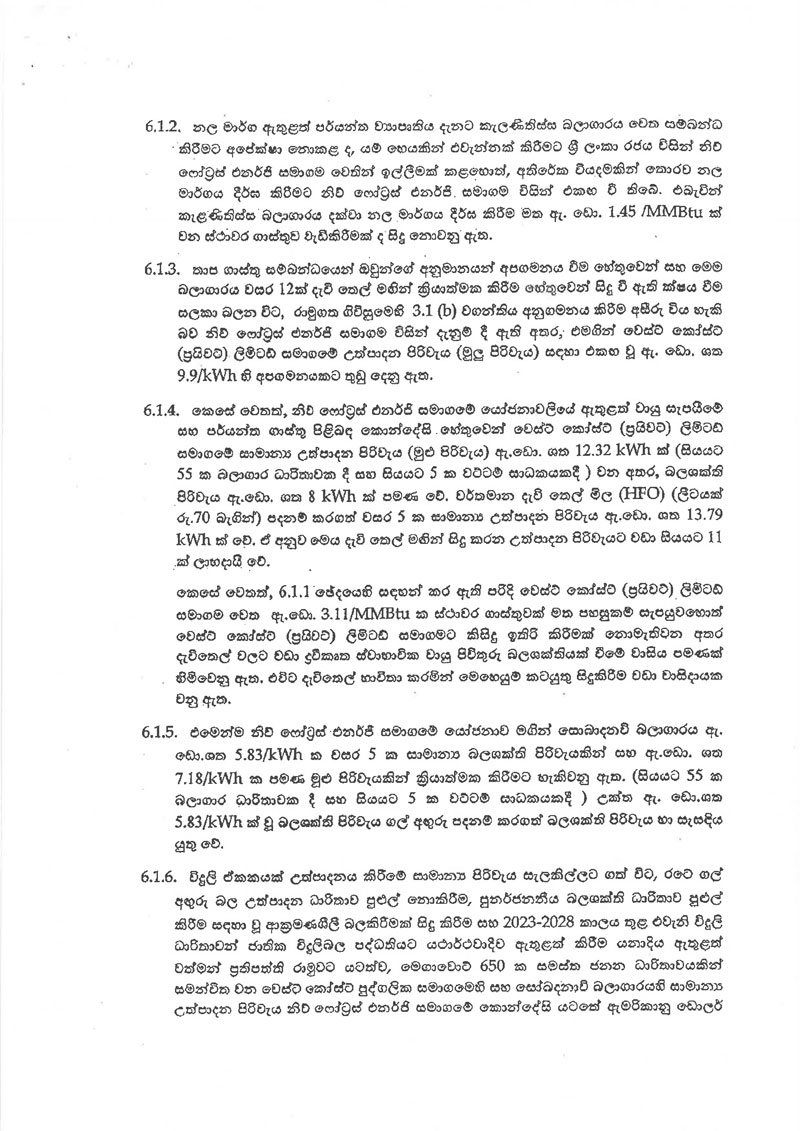 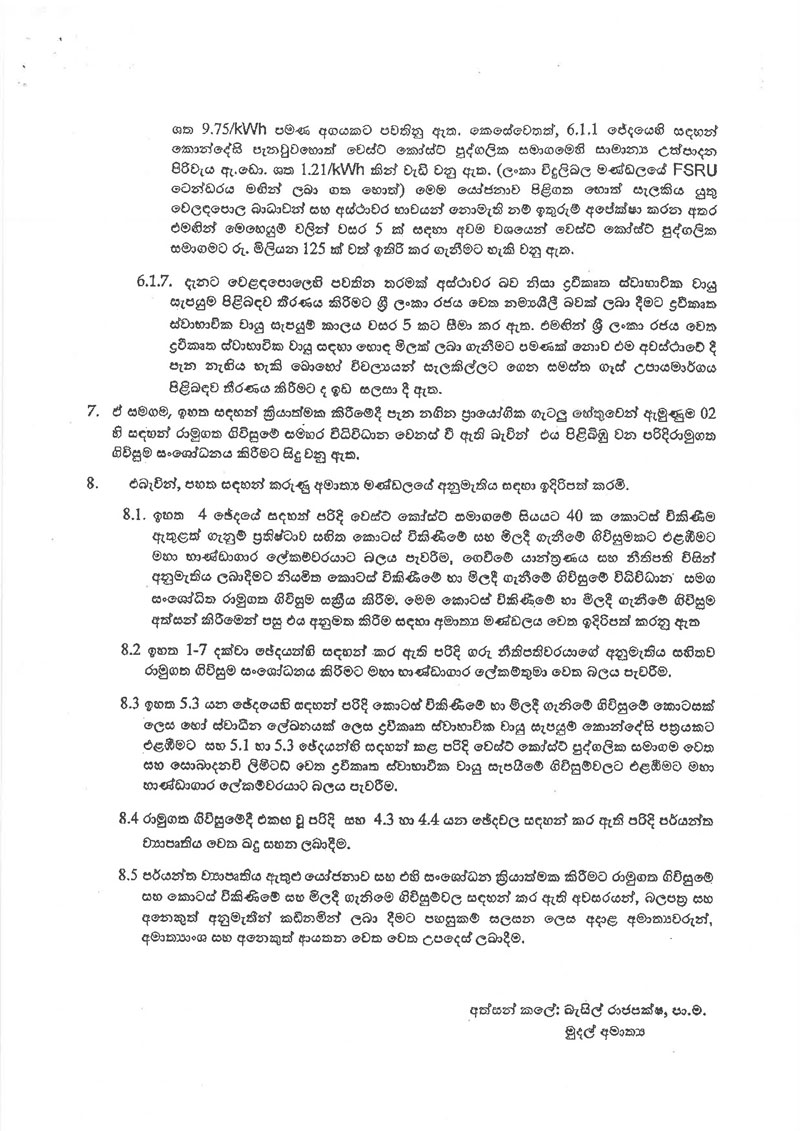 (By a special correspondent)