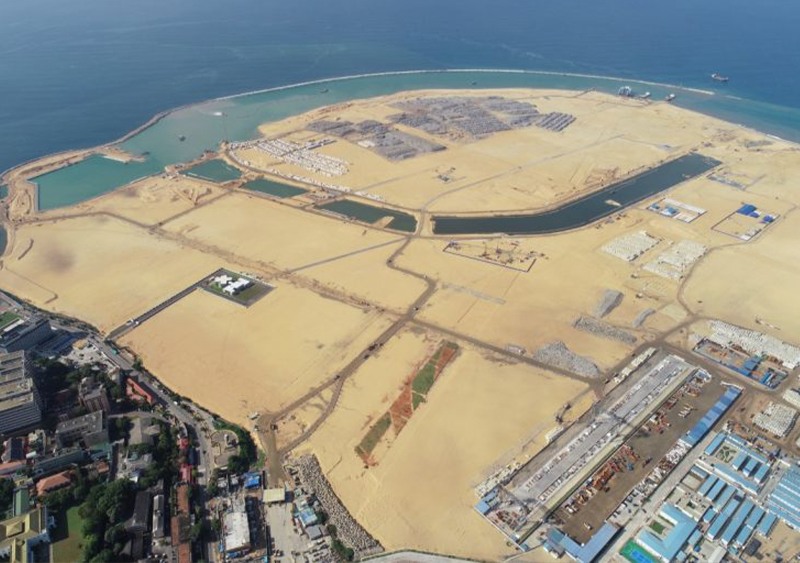 The draft bill titled “Colombo Port City Economic Commission” published in Part II of the gazette dated 19 March, 2021, was tabled in parliament on Thursday 08 April for the first reading.

Timed for the long weekend with Monday declared a public holiday leaving just 02 working days in the week for anyone to file a petition seeking its constitutionality.

The draft bill says, “it has become necessary having regard to the national interest or in the interest of the advancement of the national economy, to establish a Special Economic Zone”.

These high moral pledges come as cosmetics for the neo-liberal “free market economy” we have had for over forty years since 1978 when President Jayawardne promised “development” in leaps and bounds.

The Greater Colombo Economic Commission Act No. 04 of 1978 enacted for such accelerated development subsequently amended in 1992 as Act No.49 to establish the “Board of Investment of SL” (BOISL), with wide powers extending its jurisdiction to cover the whole of Sri Lanka also promises “economic development”, widening and strengthening the base of the economy to encouraging and promoting foreign investment to increasing export earnings.

With all that, what have we in Sri Lanka gained during the past 40 years as a nation?

Four protests that continue gathering momentum shifting from district to district and catching global attention provide the answer to that question.

People’s protests against massive destructions and devastations to environment, poor rural women’s agitations demanding scrapping of micro-credit loans that has resulted in over 200 deaths due to incapacity for repayment, school principals’ and teachers’ demands for increased salaries and a new global campaign for workers’ rights, forced severance from work especially in the garment sector and non-payment of severance pay even in Sri Lanka during COVID closures, are results of 40 years of free market exploitation.

We have in real life, only worsened the situation during the past four decades and ruined whatever there was.

There is chaos in law-and-order enforcement along with serious breach in social trust in the legal and judicial system, total breakdown in State administration with inefficiency, politicisation and sweeping corruption tied to erratic governance in tandem with filthy rich dealers, to complete the story.

Can the Colombo Port City Special Economic Zone (CPCSEZ) draft bill the government gazetted and tabled in parliament, provide answers for these complex and inter-related tragedies?

People are made to believe, CPCSEZ is the magic wand that will “develop” the country. Academics and economists are trained to argue, the way forward is with novel concepts and “liberal” business relationships to attract FDIs.

Yet there is nothing “novel” in this Port City project. It is a larger version of FTZs with far more freedom for investor exploitation with legal powers to override laws of the land. Governed by a “Commission” appointed by the President that is not even responsible to the parliament.

In fact, the CPCSEZ under the “Commission” to be established will be far more independent than a “Federal State''.

While a single currency is a significant factor in a unified single State, CPCSEZ will have a second valid currency the US “Dollar” to be the main and the major currency with other accepted foreign currency.

Within the CPCSEZ, even wages will not be paid in SL Rupees. The proposed Act says in Section 35 under Part VI, the Commission “may employ any person, whether a resident or a non-resident, and such employee shall be remunerated in a designated foreign currency, other than in Sri Lanka Rupees”. SL Rupee will have only restricted validity within CPC.

Over and above that the Commission will have “land powers”, Provincial Councils (PC) are not allowed even with full implementation of the 13th Amendment. The draft bill says in Section 06(1)(c) to (f) in Part II, and again in Section 38(a) to (d) the Commission shall have powers “to enter into transactions as provided, of government marketable land and project company marketable land and premises and condominium parcels standing thereon within such Zone”.

With such extraordinary powers at hand akin to a separate State, 07 major laws of the land given in Schedule III have been legislated in the bill in Section 73 as “not applicable” within the CPC. 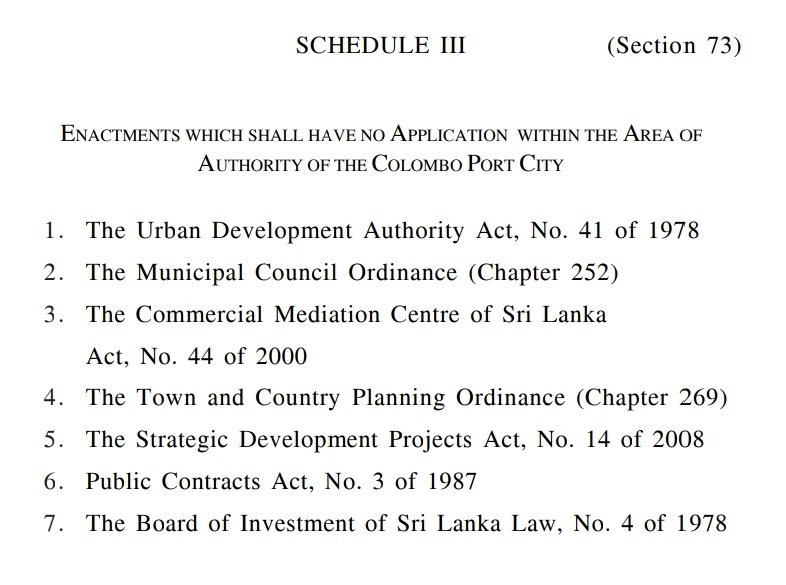 The Commission is also vested with powers provided in Sections 52 and 53 that can change or amend 14 laws of the Central government mentioned in Schedule II, 13 of which are about collecting taxes, duties and levies. 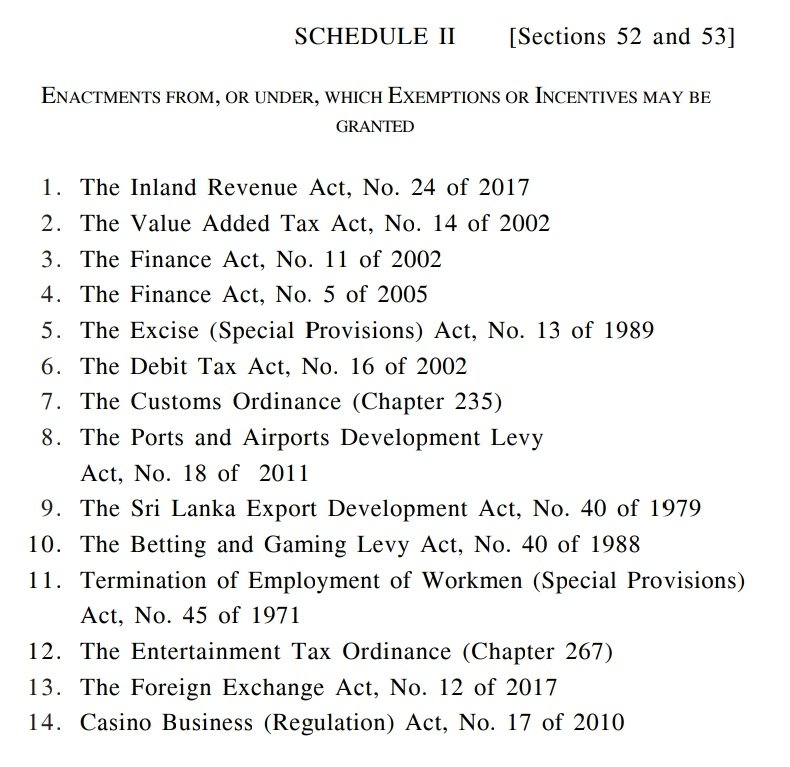 The other is the “Termination of Employment of Workmen (Special Provisions) Act, No. 45 of 1971”, a crucial law on employment security. All that, not for the benefit of workers but certainly for “investors”.

In a single package, all legal provisions in effect will provide for economic activities within the zone to be outside the national economy and will not be adding anything of worth to “national development” either.

While that remains adversely so, it is argued in urban middle class circles that China’s economic strength is in such “special economic zones”. That is what we see as outsiders. They have not been successful even in China for the larger majority of Chinese people who still remain marginalised and poor in China’s liberalised economy.

In an online article in July 2008, Cécile Batisse specialising on global economics and China wrote “…..trade liberalisation has mainly benefited the coastal provinces, which have a diversified industrial infrastructure, and is likely to increase the already significant disparities between the coast and the interior, where activity is more concentrated on a few major traditional sectors……” (Open Edition Journals : China Perspectives – The Location of Manufacturing Industry and Spatial Imbalance ; 2008)

She then explains, “It has a high urbanisation rate, and it is there that are located most of the cities with over a million inhabitants.” And she said, “Moreover, close to 90% of foreign direct investment (FDI) is concentrated on the coastal provinces, in particular the provinces of Guangdong, Fujian and Jiangsu and in Shanghai.”

What has this “miraculous growth” in China provided the Chinese people with? It “is likely to increase the already significant disparities (2008) between the coast and the interior” says Cécile Batisse. The poor getting poorer, not only in terms of income, but in terms of infrastructure and access to services.

As Batisse notes, “The policy of redistribution and the public transfers seem insufficient to counterbalance the growing inequalities between coastal China, whose productive infrastructure is being modernised, and the China of the interior, which maintains an archaic structure.”

This China with heavy discrimination is no successful model to be idolised and copied.

Not only because it has heavy socio-economic disparities in society but also for political reasons almost ignored. Xi Jinping’s China is economically powerful and is thus seen by the outside world as the fast emerging “world power”. China is understood as powerful with heavy pumping of money not only into poor and developing countries creating “debt traps” but investing in US Treasury bonds as well to the value of 01.1 trillion US dollars by 2019.

It is a duality with political contradictions of Deng Xiaoping’s creation since opening up its economy to world trade. Post Deng Xiaoping China economically is not related to Mao Zedong’s legacy of “Communism”.

Economically it now thrives on what Mao rejected as “capitalist revisionism”. But the irony is, China’s role in the global market economy is firmly rooted on Mao’s “communist” legacy of a single political party authority.

During the past 02 decades the Chinese economy gave opportunities for young generations to seek education in the USA and in EU countries that led to ever growing aspirations for freedom and democratic space.

Living and studying in Western capitalist societies, influenced the young to “think liberal”.

Yet authoritarian rule with Mao’s communist party, cannot co-exist with aspirations for freedom and democracy in a growing liberal economy.

Ruthlessly repressive treatment of major minorities in poor provinces like Muslim Uighurs and Buddhist Tibetans indicates the present regime is in no way prepared to democratise society.

The defence budget for 2021 had been increased by 6.8 per cent to 202 billion US dollars compared to 2020. Allocations for R&D in security and technology will keep increasing 07 percent or more annually, during the next 05 years. Aim is to establish a “world-class military”.

Reforms in PLA would focus on “strengthening the army through politics, reform, science and technology, talent and rule of law.” '

A world-class army and “rule of law” together indicates how Jinping’s regime would compromise with new aspirations for freedom and democracy.

It is heading towards new contradictions and an escalating conflict that would demand new and pragmatic answers. Jinping’s leadership has no alternative but to continue with their SEZs and may even establish new zones as well while establishing a modern repressive State against major ethno-religious minorities and Citizens’ rights.

They would develop China into an economically strong nation, but not a democratically respected China.

That leaves nothing for other countries to borrow from Jinping’s China for a “development model”.

It is in such context the CPCSEZ remains China’s investment with a stronger foothold than even in Hambantota and not Sri Lanka’s future in any stretch of imagination.